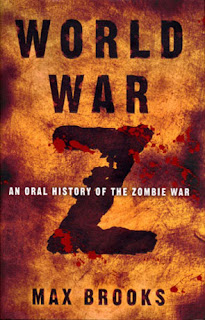 Just a few days ago, I was talking about how zombies are on the upswing, and I mentioned a book called World War Z. It sprang to mind then because I had just finished reading it. It's very good. It's worth its own review. So here it is. The review.

World War Z is a unique piece of zombie fiction. Rather than following the tried-and-true storytelling gimmick of following a small band of hardened survivors, World War Z relates the entire history of the zombie war, from the first infection site to the viral spread, the panic that follows and the hard-fought victory. I'm not giving anything away, either - the mock introduction tells us right from the outset that we beat the living dead. What it doesn't tell us is how, or all that happens in between, or what we lose in the bargain.

The story is told through a series of oral interviews that the author of the book conducts all over the world. He talks to a rural doctor in China, a Russian solder in Kazakhstan, a housewife in the U.S., and a mercenary holed up on a Caribbean island. Taken one at a time, these stories are tense and fascinating and gritty and believable. And while this technique of relating interviews could have backfired, resulting in a sloppy mess of chaotic storytelling, author Max Brooks artistically weaves them all into a continuous, seamless look at the world's response to an apocalyptic event.

The format does more than just spin a yarn, too. By covering individual stories taken from different points in the zombie apocalypse, Brooks manages to tell us how China responds to the emerging threat, how panic seizes the United States, how Japan evacuates and South Africa comes up with a plan. At the same time - literally - we're reading individual stories of harrowing danger and gutsy survival. A history book would tell the story of the war one event at a time, and we get that world view. A series of short stories and novels would relate thrilling tales of luck, balls and heroism, and we get to enjoy these entertaining tales, too. Brooks takes on a huge task, one most writers would be hesitant to attempt, and he pulls it off with flair.

By their very nature, zombie tales require an immediate suspension of disbelief. There are no zombies in real life, and actually believing that zombies could potentially wipe out the human race is beyond absurd. Yet World War Z manages to come across as believable, not just because the characters are so dimensional and subtly credible, but because the governments of the world don't crumble to ash. My greatest complaint with the bulk of zombie fiction is the ridiculous belief that a viral infection would cause the collapse of government. A carefully planned and masterfully orchestrated terrorist attack might destabilize the governments of the world, but a horde of shambling halfwits is hardly going to be the end of governments worldwide - at least, not right off the bat.

Though World War Z does establish considerable credibility by showing us the survival of the ruling class, it also shows us just how close the world could have come. We see tales of short-sighted, knee-jerk responses and poorly considered plans. We see a global panic more dangerous than the undead. Through the stories of starvation, deprivation and horror, we can feel just how terrifying the world became, and how narrowly we avoid extinction.

One of my favorite things about zombie fiction, whether in film or novels or comic books, is how the premise is often used for a greater purpose, to make a larger point. Unfortunately, more often than not, the larger point is an effort to tell us that in a world overrun by the living dead, the real monsters are the human beings. It was thought-provoking the first four times. By now, the whole idea is overused and trite. I really enjoy The Walking Dead, both the comic and the TV show, but this 'humanity is evil' thing gets done to death, and it is refreshing to see a viewpoint that isn't thoroughly depressing.

Which is why I was so glad to read a piece of zombie fiction in which the real monsters are not the people. The real monsters are the frigging monsters. World War Z doesn't try to tell us that if the dead started to do the hungry cha-cha on our front lawns, we would all turn into homicidal super-villains. Instead, it tells us that we never know how heroic we can be until the chips are down. When everything is on the line and the body parts are flying, that's when we see real heroes. Faced with bloody demise, we man up and kick ass.

Granted, not every story in World War Z is a tale of the indomitable human spirit. There are cowards and thieves. There are murders and heartless exploitation. But taken as a whole, World War Z tells us that even in the face of overwhelming horror, humanity has the stones to save ourselves. The book shows a human psyche that is scared and brave, weak at times and invincible at others. By showing us an entire world, World War Z does what zombie fiction does best, when it's doing it well - holds up a mirror and says, 'hey, this is you.' It is thought-provoking and smart and credible, and goes beyond the story to give us a good look at ourselves.

I looked around and found a ten-dollar copy at Amazon. That's pretty good. I would buy that.