This here is another review by my dad, who I call Dad, and you may call Mister Drake. 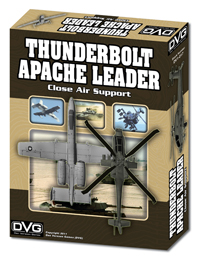 A bit of autobiographical background.  I walked out of a college class in 1967 to join the army.  I hated the boring classes so I decided to go for some excitement in life (I’d grown up in the country chasing cows and horses and shoveling, well, you know) and so enlisted airborne.  (Ah, the impetuosity of youth!)  But at the end of basic training I was sent to take a battery of tests and, lo and behold, I’d passed the exam to be a helicopter pilot.  I pondered this event, and finally went to my X.O. and said I’d like to go to flight school.  He was pure infantry (no real excuse for him, just an idiot) and he said (shouted would be more precise) “NOOO! You’re infantry!  Ya’ gotta be infantry!”  (Remember this was 45 years ago so I can’t give a direct quote, but that’s the gist of what he was saying.)  Well, he never sent my papers in, and so I was infantry.  I tell you that because Thunderbolt Apache Leader allows anyone who dreamed of being a helicopter pilot (or Thunderbolt pilot) to try their hand at it without undergoing the misery of training and threat to one’s life.

DVG makes a slick product.  When you first open the box to Thunderbolt Apache Leader you can’t help but be struck by beautiful quality of the components.  And not only attractive, but the components are very functional and contribute to smooth game play.  The tiles used for terrain are thick and have a laminated surface on both sides.  The counters (and there are a lot of them) are of the same quality and pleasing to the eye.

The rulebook is clearly written and easy to follow.  It lays out the details in such an order than you can be set up to play before you’re a third of the way through the book.   This can be very satisfying when you consider all the rulebooks you’ve had to read from cover to cover before you even lay the gameboard out on the table.  Once you see TAL set up and ready to play, it draws you in and leads along so that you’re actually playing the game before you feel any lapse of time.  This is obviously a case where “practice makes perfect,” since Dan Verssen has had valuable experience in his game designs to be perfecting his product.

There are a lot of cards in this game, and they’re designed in such a way as to provide a maximum of suspense during play, and an unimaginable number of play options.  For example, there are twenty-eight different pilots/ aircraft to choose from, and each pilot has six different levels.  When you consider the different wars you can tackle, and the eight different situations in each war, and multiply that times the pilots/aircraft, well, you can see that unless you’re marooned on a dessert isle for a long time you’ll never get to play all the combinations.  Then there are the random events provided via cards.  These add more flavor to the game than MSG.  This game is no cake-walk, and you’ll find those cards throwing some nerve-wracking curve balls, while at other times providing just the trick you needed at the right moment.

There are a lot of other reviews out there that go into the close-up play-by-play detail of the game, so I won’t belabor that again here, but suffice it to say, the game flows very quickly and smoothly AND provides a fun sense of flying chopper missions to take out nefarious foes.  What most stands out to me is the plethora of decisions you get to/have to make in this one game.  You have to choose your aircraft, then your pilot, then your weapons, are you going to fly high, or come in over the trees (or dunes), are you going to go for that enemy unit, or call it a day after sustaining damage.  On and on and on.  All-in-all a prescription for a great game.

I’ve only played the introduction scenario – Iraq Surge – just to be familiar with the game, so I can’t say anything about how well the game will keep you interested in playing over the long term, but if you love solitaire games and you find you love this system, you have a LOT of game before you.

So far all I’ve said about the game is on the positive side.  On the other side of the ledger, first thing to point out is that it is a solitaire game.  No surprise to anyone considering the game, so that shouldn’t be a factor, except that I’ve never cared for solitaire games.  I have to have a living, breathing opponent or the game just doesn’t excite me.  The only reason I played it at all is because it was handed to me to review, so review it I have.  But quite honestly I don’t think I’ll pull it out again.  Don’t get me wrong – it’s a beautiful game and I did get drawn in as I set it up, but it’s still a solitaire game and didn’t earn a place in my heart as, say, Hannibal: Rome vs. Carthage.  If you enjoy solitaire games, you’ll have to put this one on your “must own” list.  HOWEVER, if you only enjoy boardgames when there’s a flesh-and-blood opponent sitting across from you, you’ll probably not care for this game.  Second, this is the kind of game that really works better as a video game.  I’ve praised the quality of the game’s components, and rightly so, but when you consider the time investment to read the rules and set up the game you can’t avoid the creeping thought, “Man!  I wish I could just turn on the x-box and start blowing up crap.”

And in the way of closing, I have to let you know that until I passed that exam for flight school I’d never dreamed of being a chopper pilot and I’ve never really regretted I didn’t make it.  I think I had a LOT more fun jumping out of choppers into hot LZs that I’d have had flying them.

Negative:
Would be more fun (IMO) as a video game.
It’s a solitaire game.

You can get Thunderbolt Apache Leader direct from DSV, right here:
http://www.dvg.com/.sc/ms/dd/ee/41/Thunderbolt-Apache%20Leader
Posted by Matt Drake at 6:52 PM

DVG thinks it would work well as a video game too, that's why Phantom Leader (another similar solitaire game in this line) was released on iOS last week. :)