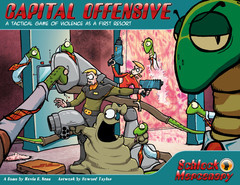 I used to start every day by reading through my daily dose of web comics. Most of them were just for the sake of the joke, but my favorite was a story-based daily called Schlock Mercenary. The art was weak, but the stories were great, the characters were interesting, and the dialog was outstanding. It was about a roving band of space mercs, focusing in particular on a green goo alien named Schlock who shot things with a plasma cannon and ate a lot of fried cheese.

Being a big fan of the comic, I was delighted to get a review copy of Capital Offensive, a skirmish game based on Schlock Mercenary. You get to play Tagon and Legs and Kevyn and, of course, Schlock as they fight serpentine lawyers and violent foes, and you get to kill a whole lot of people. So that's pretty awesome.

The game starts out with a training mission, which sets three enormously overpowered mercs against a horde of snaky attorneys. The rules are basic, and you'll pick them up pretty quickly, which is nice because the training mission is so lopsided it's actually kind of boring. The snakes are freaking doomed.

Playing the full rules, on the other hand, will let you pick up equipment, dodge and aim, go on overwatch, and otherwise play a considerably more tactical game. More options means more decisions, and more decisions means more fun. You'll run around the inside of spaceships, blasting your enemies and jumping through teraports and grabbing up goober guns. It's a lot of action - but unfortunately, still not really a great game.

I hate to say it, but my first strike against Capital Offensive is that it is not very pretty. I know, I already said Schlock Mercenary is a visually unimpressive comic, but the game is somehow even more bland than the comic. Sure, the art is taken straight out of the comic, but it's just not very exciting. Frankly, it needs plastic. I don't need thirty different characters. I can get by with a dozen, if they're miniatures and not cardboard circles.

And the floor art is so flat and colorless that it makes the game less fun. This is a serious shame. Look at the art for Space Hulk - the tiles are simply amazing and the game is more fun because of it. It's simply not fair to compare Space Hulk to Schlock Mercenary, but the tiles did not have to be this drab. There were things that could have been done. There were opportunities missed.

I could get past the sleep-inducing art if the game were amazing. Sadly, it's not. I'm not saying it's bad - it's really not. But it's also not great. We did have fun blasting each other with sniper rifles and laser cannons, but it just didn't feel like a lot of maneuvering and razor-wire decision-making. Dungeon Command is an exceptional skirmish game with only twelve miniatures per side and an incredible amount of depth and tension. Capital Offensive is the same kind of game, but without the tension or depth. It's not bad. It's just average.

Unfortunately, in a market where more than 800 new games appear every year, there's no room for average. Your games need to be better than average. They need to be exceptional if they want to compete with the hundreds of other games I could play. The only people I can see getting very excited by Capital Offensive are those who are already Schlock Mercenary fans. Everyone else will just go play HeroScape.

If you are a fan of Schlock Mercenary, you'll see that the creators of the game went to some serious lengths to make Capital Offensive a good Schlock game. The characters are in there, including a bunch I don't recognize any more because I have a day job now and can't read web comics at work. The weapons are in there. The art is in there, and I even have a custom-drawn character card done by Howard Tayler. I probably won't play it again, because I have several other good skirmish games, but if you're a fan, it's worth at least a glance.

Get more glances at Capital Offensive at the Living World site:
http://livingworldsgames.com/project/schlockcapitaloffensive/
Posted by Matt Drake at 4:21 PM