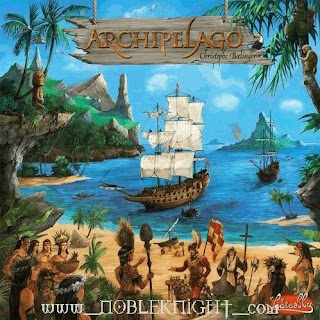 Asmodee understands that theme is important for gamers. That's why, when they make a game, they use the same exact theme for every fourth game. Settling the New World from Europe may have been done about seven hundred times, but people keep buying it, so it must still be popular.

Archipelago is a game about settling a bunch of islands in the middle of the Caribbean. It covers a wide span of time - each turn is supposed to be about fifteen years, which is enough time to have babies and add them to the work force, as long as you're cool with child labor. Given that the game takes place during the 1500s, I think it's safe to assume child labor is just fine.

(Quick aside - Archipelago is not an easy word to pronounce. That's probably why they chose it. They could have just called the game Settling Islands, and we would never have worried about how it sounds, except that nobody would have bought it. So they went with a title that I've been pronouncing incorrectly for decades, and found out when I played a half-dozen times that I was saying it all wrong. I was putting the emphasis on the 'lah' sound, which is wrong. And the French dude I hung out with at BGG Con kept saying it 'arsh', not 'ark,' which is probably right if we're in France. Which we were not. So it's actually 'ark-uh-PEL-uh-go.' In case you were wondering. You probably were not.)

Archipelago is a cooperative game with a winner. Or, more accurately, it's a highly competitive game that everyone can lose. In fact, it's only cooperative because it's so damned easy to have the natives of your little island paradise rise up and throw every last imperialist dog out on his ass. There's a population track that tells you how many people you have working for you, and there's an angry dude marker that tells you how close you are to open rebellion. If you piss off your people until they rebel, everyone at the table loses.

(Another quick aside. The population marker is a white meeple. The discontent marker is a black meeple. I was not responsible for these color choices. When I tell you that if the angry black dude catches the white guy the game is over for everybody, I need you to understand that this sentence was not my idea.

I mentioned this odd color decision at BGG Con, slightly worried about sounding like a racist asshole, but then realized that I had almost nothing to worry about. It was a board game convention. There was only one black guy.)

Anyway, in Archipelago, you're all European imperialists raping the islands under your control to wring every last drop of wealth out of them, and at the same time, you're wealthy benefactors making sure that everyone stays happy. Doing both things is almost impossible - if you keep all the pineapple to sell to the French court, thereby making a ton of money on exotic fruit, the locals will get scurvy and start burning effigies on your front lawn. If you put all your resources into keeping the people employed and fed, you won't have anything left to build those great statues back home that let everyone in London know how awesome you are.

Attempting to describe the rules to Archipelago would make for a long, boring review (which will not stop a lot of people from doing it anyway). But there is one interesting element in Archipelago that I haven't seen in games before, and it bears some discussion.

You know how in most really diversified games, the end game is based on one thing? Like if you're harvesting wheat and mining iron and building troops and establishing brothels, the only thing that matters in the end is how much money you have. That's not how it works in Archipelago. In this crazy complicated game, you don't know what will make you the winner. You have to prosper - build towns and ports, harvest stone and iron, build a happy population and a fat wallet. You don't know what specific things will be the deciding factor, so you just have to do your best to do your best.

This exceptionally cool development in gaming is made possible through hidden objective cards. You have one card that tells you one thing that will be worth a bunch at the end of the game, but everyone else has one, too. So in a five player game, that makes five different things that could be scored, and you have to score on every one of them. Weakening your fleet might save money, but in the end, you might be scoring ships for victory points. The end result is that instead of focusing on one single aspect, you all do make the most prosperous, well-rounded civilization you can create.

Speaking of civilizations, Archipelago has a lot in common with those heavy, all-nighter games you used to play in college, back before you had a family, when you still had free time. If you like Through the Ages, there's a real chance you'll dig this one. Play time on the back of the box says it could go 240 minutes - four hours - and that's not an exaggeration. We never finished inside three hours, except the one time where we all lost because we ran out of cows and the islanders decided to eat us instead.

It's not just long for no reason. There are immense decisions to make, and unlike most games where you have pretty good information on what's coming up next, Archipelago keeps you guessing and preparing all the time. You'll need to increase the population - but should you hire workers or breed your own? Can you afford the additional mouths to feed? And once you have those workers, should you send them out to explore the world, or should you have them gather papayas? Maybe they would be better off running a port or a town, so that you can sell your resources to Mother England and line your pockets.

There's so much to do in Archipelago that it can be quite daunting the first time you play. If you think you've got the mental cajones to work through the rules, and then you've got the Saturday afternoon to spend playing the game, you might find that this is exactly your kind of game. But if you prefer six-page rule books and games you can finish on a lunch break, you really ought to save your money for something easier. Archipelago is fun and deep and intense, but it's not a light game. It's heavy. And I don't mean just because it's complicated. It's more like if you eat at TGI Friday's and get an appetizer and a huge meal and a slice of ice-cream cake, and then you have to unbutton your pants before you throw up. I mean it's heavy.

Happily, the guys at Asmodee know that if you're going to spend an entire night playing one game, it should be easy on the eyes. The island tiles are gorgeous. The colors are bright and pleasant. The illustrations on the cards are the same quality you can always expect from Asmodee, which is to say they are outstanding. The game looks amazing, all laid out on the table, and it's a pleasure to play even if you're just there to look at the pretty pieces.

So what if the theme has been trotted out more times than a street walking trollop. The theme fits, and plays out beautifully as you play the game, and what's more, you can really feel the passage of time (and not just because you're there for three hours). If you like to really get into a game, if you like difficult decisions and rewarding intellectual investments, Archipelago is a powerful fun game.

Pros:
The theme comes to life
A new kind of winning condition that I suspect we're going to see a lot more as time passes
Engaging and deep
Seriously pretty

Cons:
Massive play time (not a con for me, but I know not everyone has a lot of time)
Seriously? Settling the New World AGAIN?!

Check with your brain to see if it's up to play Archipelago, and if it is, get a copy from Noble Knight Games and save more than 20 bucks:

FWIW, this same victory condition model is used in Troyes and there are probably other examples as well. I tried Archipelago at BGG.Con too and everyone seemed to like it even thought the natives were suddenly restless and trashed all of us.

I'm just curious why the game can end with everyone losing. Doesn't this allow one dick player to refuse to do anything to stop the natives? CO2 has this too for some reason.

Awesome review though, my interest is officially unpiqued.