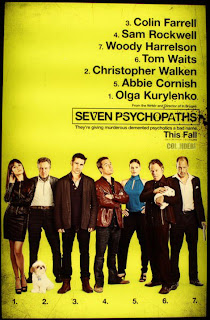 Being a huge fan of crime movies, especially the quirky kind made popular by True Romance and Pulp Fiction, I ignored my rule about not going to the movies to go catch the new crime-almost-a-comedy Seven Psychopaths. I mean, I went to the first show of the day on a Sunday, when most people in Texas are in church and the hoodlums who ruin movies are still in bed, but the point is, it had to be a pretty big deal to get me into a theater at all.

Seven Psychopaths is not a comedy, but it's got lots of moments that will make you laugh. It's not a thriller, but it has lots of excitement. It's not a date movie - and thank God, there are no lame-ass romantic entanglements or love triangles. Yeah, it's definitely not a date movie. I did take my wife, but I took my son, too, so it wasn't a date.

This off-kilter movie about stupid criminals and angry murderers features a Hollywood screenwriter with writer's block, a couple of dog kidnappers who make their money cashing in on reward money, and an especially deranged mob boss who loves his dog, but hates his girlfriend. The setup might seem like black comedy, but unlike other campy films that laugh at dead bodies, Seven Psychopaths is a smart, engaging film with a point much deeper than tasteless humor.

But that's not to say the movie isn't funny. Christopher Walken is routinely hilarious. Sam Rockwell steals every scene, and you'll want to laugh at nearly every single thing he says. Woody Harrelson, playing a remorselessly murderous bastard, will make you laugh all the way through the film. Even Colin Farrel, who I really don't tend to like, is funny and entertaining. But like I said, even with all the jokes, Seven Psychopaths is not a comedy.

Some movies have gimmicks. Memento, for instance, relied on telling the story backwards. Pulp Fiction tells its story out of order, focusing on a single character for a spell and then moving on to another, but with the stories all out of order. Seven Psychopaths features what could be mistaken for using a gimmick, but it's not really. It juxtaposes a screenplay about seven psychos with a story about killers, and uses both to weave a layered story that comes at you in pieces.

This fake movie vs. real movie back-and-forth crosses over between the 'real world' of the movie you're watching and the make-believe story being written by the main protagonist. The fake story features several characters who never make it into the actual events, but the real tale also has several people who don't make the leap to fiction. However, while the fake movie might be fun to watch, it's not there purely for its entertainment factor. It's there to make a point, to make you think, and to present a mutable backdrop that changes to reflect the mindsets of its collaborating writers. You find out more about the real characters from the stories they tell than you ever get watching their actual lives.

I saw Seven Psychopaths this morning, and had to think about it all day before I could write this review. There's a great deal of hidden meaning and subtle commentary - so much, in fact, that I know damned well I didn't get it all. There were some points about linear, predictable Hollywood film-making (a point driven home when the previews featured a basic revenge fantasy movie with that bald guy from Snatch). There were some thought-provoking comments on the value of revenge, some commentary on our societal desire to see people being brutally slain, and no small amount of discussion on what it means to be a friend.

I don't want to make it sound like Seven Psychopaths is a movie you can only enjoy if you're some kind of Harvard film school snob. Taken purely at face value, this is an entertaining, chaotic adventure with an ending you won't see coming. And not like an Alfred Hitchcock 'holy crap why I didn't I see that' ending, more of a 'real life doesn't wrap itself up in a bow' ending. There's dark humor doled out by the bucketload, plus shootings and explosions and sex. Without having to dive into the deeper meaning of the film, you can enjoy Seven Psychopaths as a wacky crime movie with lots of over-the-top characters and dialog so tight you could bounce a quarter off it.

Comparisons to Pulp Fiction are going to be almost unavoidable. Seven Pyschopaths has some amazing dialog, so tight Tarantino could have written it before he started believing all his own press and not letting anyone edit his movies. It has the same kind of surprising moments (well, there are no bizarre basements under the pawn shop, but there are surprises). It has the same irreverence for human life, brought into stark contrast with the unconditional love for a pet. But while I did think Seven Psychopaths was an excellent movie, and I intend to buy the DVD when it's out, this is not Pulp Fiction. Hell, even Tarantino can't bottle that lightning again, no matter how hard he keeps trying.

There are some pacing issues, for instance. The first two-thirds of the film are crisp and fast and demented, and then there's a lengthy lull near the end when you may be watching impatiently to get to the part where something happens again. We go from a raucous series of senseless murders (and a few that make sense) to an oddly elongated campfire in the desert.

OK, actually, that's about it. That's the only flaw I found. A couple scenes at the end of the movie kind of threw off the timing, but not only was that part of the movie necessary for the deeper meaning of the tale, but it's really not as bad as it could have been. The acting is exceptional, the story is bizarre and engaging, the dialog is hilarious and impeccably timed. If Pulp Fiction is the perfect 10 of quirky crime movies (and in my opinion, it is), Seven Psychopaths is a solid 9.75. I haven't seen a movie I enjoyed this much in a long time, and I loved the layers of story being told. The gimmick wasn't a gimmick at all, and it worked perfectly to serve up the deeper points without having to bludgeon us with them.

Now, fair warning - don't take your kids to see this movie, unless your kids are older. There's toe-curling profanity, messy murders, and more than one scene with boobs in it. Not only that, but I don't think there's a snowball's chance in Hell that any kid who hasn't digested Fight Club is going to understand any of the deeper meaning in Seven Psychopaths. That's fine, though. This is a movie designed for adults, not meant to appeal to the immature. It's got an entertaining surface story combined with some very funny moments and an undercurrent of deep thoughts. If you liked Pulp Fiction, you're going to like Seven Psychopaths.
Posted by Matt Drake at 7:58 PM

Good review Drake. Such an unpredictable, funny, and dark tale that only gets more entertaining as it goes along. It's not as near-perfect as In Bruges, but still a whole of fun all the same.

Seems like you haven't learned anything from the movie "Dan O." :(