Card Game Review - You Are The Maniac 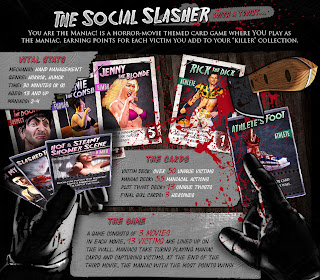 Today's review is more of a precautionary tale, a sort of How Not To Kickstarter. Unfortunately, given the number of people who are willing to throw money at anything that passes by like a rich kid in a titty bar, this precautionary tale is likely to send the wrong message, because this one is probably going to reach its goal and thereby bring into existence yet another crappy game.

The people creating You Are The MANIAC! (the emphasis, in this case, being absolutely not mine) are doing everything right. If I were going to run a Kickstarter promo to sell a game, I would hire these guys to be in charge. They're showing spiffy art, sending regular press releases, and advertising in all the right places. They did, unfortunately, neglect one thing - they didn't make a good game.

The idea of the game is that you're all horror-movie serial killers, and you're competing to kill the best victims. Harlots and bimbos are worth the most, while cops and well-meaning parents are worth the least. You have weapons and masks and dirty tricks that you can use to make sure you wind up with a better selection of dead bodies than your friends.

Theoretically, this doesn't sound entirely bad. It sounds like bad-taste fun, and I can get behind that. But it falls apart when you play it, because when you play it you realize that someone made a game about killing teenagers in horror movies and they made into a freaking EURO (this time, the emphasis is mine). It's a set-collection game with some minor card play. Worse yet, it's a game with limited interaction, very few real decisions, and too much dorky art.

Yeah, dorky art. The stuff they're showing on the website is A-Game material, but that's not what's on all the cards. Mostly, the pictures of victims are Poser models with a cheesy Photoshop filter. Sometimes that works. Mostly it doesn't. In the case of the fat guy in the jacuzzi with his pants off, it seriously, emphatically doesn't work. Also, most of the athletes look like they would be more comfortable in a pride parade than a spooky cabin. If these football players are chasing tail, it's just an attempt to cover up the fact that they're really in love with the towel boy.

On your turn, you play a card and capture a victim. The cards don't do a whole lot, and it's usually pretty obvious which card would be your best bet. In most cases, you want to play the card that will actually have some effect, as opposed to the ones that won't really do you any good at all. There's no hand management, no sacrificing cards for future effect, no planning ahead or tense decisions.

Then you have weapons and masks, the defining characteristics of the horror movie killer. These identifying traits do... nothing. They add points, and that's it. You don't combine them to make yourself more dangerous. You don't have specific victims who can be more easily defeated with a fireman's axe. Even better, you can swap them out as you play, so you might start off with a hockey mask and a machete and finish the game with a bread knife and a pair of grandma's bifocals. Not real butch there, Freddy.


I would keep writing about all the ways YOU are the MaNiAc!!11! doesn't work (OK, yes, those emphases were mine), but the fact is, it doesn't have enough things working to be a game with multiple things that don't work. It's barely a game at all. It's not fun, it's not interesting, and it's not pretty. If I were stoned all the time and spent my weekends digesting old 70's slasher flicks, I might get a kick out of the game, but I'm not, and I thought it sucked.

I did get an interesting piece of news today, in the form of one of those press releases I discussed earlier. It seems the designers of the game, having read a few pieces of feedback, are changing how the game works. So now I'm reviewing a game that doesn't exist yet in a form that will be changing. If you gave money to this game already, you're not getting what you thought you were getting. And if you're about to give them money now, you don't actually have any idea what you're getting, because they're changing it from the way it is now.

I almost didn't write this review at all. When I read that the game was being changed from the game I played, I almost said, 'well, then, what's the freaking point?' But I wanted to see if there's anything I could do to prevent other people from throwing money at this Kickstarter. For that matter, stop throwing your money at games where you have no idea what you're getting. Quit funding these half-assed productions that could never get published if they had to sell them to actual publishers.

I'm through reviewing Kickstarter games. If your game has not been published, don't send me an unfinished prototype and ask me to take it for a spin. I don't want to play any more vaporware games, no more ill-conceived notions, no more brain farts on cardboard. You Are The Maniac has shown me one thing I needed to know - life is too short to play games this bad.

Pros:
An interesting and entertaining theme
A couple decent pieces of art

Cons:
A whole lot of crappy pieces of art
An uninteresting and bland game

I'm not linking you to the Kickstarter. Hunt for it, if you're just dying to see the game, but I won't be responsible for driving any more traffic.
Posted by Matt Drake at 2:24 PM

Thanks for the heads up. I have been watching this kickstarter and see it is almost to its goal. They will not have my money though.

Good news is my 2nd edition Flashpoint Fire Rescue, with expansions and PLASTIC FIREFIGHTERS kisckstarter program is due to ship THIS WEEK!!! I bought the whole shebang based on your review for the initial game.

Lastly the "prove your are not a robot" thing sucks. It's damn near impossible to do on an iphone and almost illegible on my desktop. Major suckitude. I swear half the time I am guessing at a character or two.

I certainly hope they change the way the game is played... It is (was? will have been?) essentially a direct, and in some cases word-for-word rip off-with-a-new-skin of Guillotine, published by WotC.

Kenneth, I know that captcha is a pain, but I got TONS of spam before I turned it on. The robots love me long time.

So they just change the game, huh? Because thats so easy and hardly needs any playtesting...

It's always amazing to me the number of mistakes made in professionally produced games. Equally astounding is the number of times rules should be proofread by someone who knows nothing about the game. Again, these mistakes come from from major publishers (looking at you here, FFG). Then you come across something like this and I swear the "designer" never even heard of the concept of playtesting.

This was a truly bad game. It was so simplistic and unimaginative that it could have been reskinned and marketed toward a preschool audience. However, if they reskinned it with cute bunnies to get that crowd of preschoolers, the kids would either commit suicide to escape it or turn to a life of heroin addiction by age 4 just to avoid it.

Kickstarter has its place, but the last two games that I've played from there that would obviously never have been published from a professional company were so bad that I will never fund anything on Kickstarter that does not have some professional backing to it (Reaper Minis, Mongoose Publishing, Wargames Factory, etc. are all good strong bets for quality on Kickstarter).