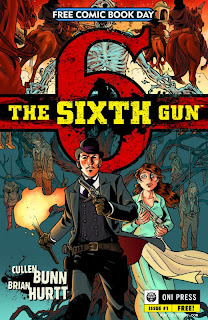 I don't know how I lived without an iPad before I bought one. It does all this totally cool stuff, almost acts like a laptop without weighing me down, and it has this awesome thing where I can buy comic books cheap and have them with me wherever I go.

Now, before I tell you about the totally awesome comic I'm reading now, I should mention that I have pretty much sworn off comics altogether. I started reading Spider-Man when I was 16, and was a serious comic nerd from then on. I read Punisher and Spawn and Teenage Mutant Ninja Turtles, back when the turtles were actually bad-ass killers and not dorky Saturday-morning cartoons who ate too much pizza and said, 'cowabunga!' But then, about 1998, I just kind of gave 'em up. The costumes were stupid. The stories were endlessly recycled. Timelines were impossibly convoluted. Superheroes were just lame.

I still love comic books, but now I'm a lot pickier. If you've got a super-powered crime-fighter wearing brightly colored underoos, count on me to take a pass. But the medium is still incredibly fun, and so I still read comics now and then. I just don't buy them in paper form any more. And I avoid superheroes.

The Sixth Gun has no superheroes. Instead, it has gunslingers in the Old West, but this is no rehashed Jonah Hex. The Sixth Gun is about a handful of people who are staving off the end of the world by preventing the forces of darkness from controlling all six of the most dangerous weapons the world has ever known. There are ghosts and dark magic, monsters and demons, and to make it extra awesome, brothels and gunfights. It's like if Harry Potter starred in a John Wayne movie, but without all the teenage whining.

Too many comic books depend on fight scenes and cool powers to drive a tale. Some of the better ones land on a compelling story, but pay too little attention to the characters. The best ones, like The Walking Dead and The Sixth Gun, weave as excellent a yarn as any Dickens novel, by building an interesting world with believable characters and a suspenseful plot. From Gord Cantrell, the escaped slave with talents in the dark arts, to Drake Sinclair, the pitiless gunslinger with questionable motives, even the heroes are flawed enough to be interesting.  Becky Montcrief, a young woman thrust unwillingly into the middle of the struggle when she comes into possession of the most dangerous of the guns, is a likable and brave character who refuses to be controlled. Yet she is still given to occasional weakness, and is no more a saint than - well, than anyone you know. Compared to Superman, the world's most boring hero, these characters are so interesting that you could almost watch them doing the laundry (mostly because if they're doing laundry, it's probably because they have to wash bloodstains out of their long johns).

The story in The Sixth Gun would be thrilling even without these well-developed characters. The collection of arcane weapons carried by some of the most evil men on Earth are primed to release untold darkness and end the world - or remake it, depending on who you're asking. That's where the story starts - but after 18 issues (which is as many as I've read so far), the story continues to twist and turn, and shows no sign of slowing down or losing my interest.

And the art! If you read enough superhero comics, you get used to a pretty boring, redundant, generic style. Sure, now and then someone is really impressive, but for the most part, the best comic book artists are indistinguishable from each other. This is not the case in The Sixth Gun, which balances out a horrific story with a clean, crisp, detailed look that borders on being cartoony. It's not Japanese-inspired crap, either - it's unique and exceptional, and you'll want to read the book just to look at the pictures.

One of the greatest strengths of comic books is the ability to tell a story with just the art. So many comics miss this aspect, and plug in copious dialog just to tell you what you should be seeing. The Sixth Gun, on the other hand, takes full advantage of the medium. It spares no detail, relaying incredible scenes without getting cluttered, and often going full pages without any written words at all. Those pages still manage to convey sadness and rage, loss and betrayal, without being the kind of thing that you just skip past to get to the part where someone gets punched in the eye.

I'm not sure exactly how many issues of The Sixth Gun are available at this point, because I just have the first three trades. But I do know that there's more story in 18 issues than you'll usually see in twice as many pages about costumed crimefighters, and better yet, no gaudy color schemes. It's not far enough along that you won't be able to get whatever has been created to date, and it's so good that when you finish, you can go back to the start and read it all again.

I don't read many comic books any more, even with Comixology on my iPad. I'm picky as hell, and rather hard to please, and so when I find a story as outstanding as The Sixth Gun, I feel a need to crow about it. If supernatural gunfights in the streets of old New Orleans sound like fun, you should definitely consider flipping through The Sixth Gun.
Posted by Matt Drake at 6:06 PM