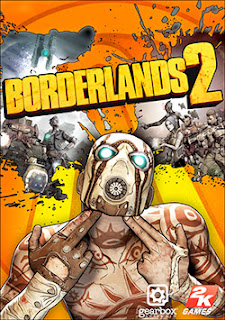 I was going to review the Schlock Mercenary board game tonight, but I can't because I haven't played it. I meant to play it last week, and then I didn't, because I was playing Borderlands 2. Then I was totally planning on making time to play it this afternoon, but unfortunately, I used up my whole day playing Borderlands 2. In fact, since I bought Borderlands 2, I have had almost no free time. I seem to be incapable of doing anything else. It's just so damned fun.

Borderlands 2 is a shooter, one of those games where you only see the end of your gun and bad guys are all over the place and you kill them. And I'm not entirely sure why I'm so hooked on it, because I get totally bored by most shooting games. I'm not even intending to play Halo 4, the Medal of Honor games actively offend me, and I don't intend to even sample the next Bioshock retread. The idea is sound, and I generally like the action part of the equation, but first-person shooters are so ubiquitous that I don't pay them much attention any more.

So why am I addicted to Borderlands 2? Why is it taking up all my time, so that I can't seem to get anything else accomplished? What is so damned fun about this particular shooter, when I am so bored by shooters in general?

There are a few reasons. It's funny. The setting is a riot. The story is interesting, with amusing characters and diabolical villains and tough heroes. There are varying missions, thrilling treasure hunts, and entertaining minigames. There's a tangible improvement system that gives the gives the game a sense of being a role-playing game. And best of all, the co-op game is awesome.

Borderlands 2 is (unsurprisingly) the sequel to Borderlands, which pretty much has all the same stuff - humor, action, story, and great co-op. Like the original, it takes place on the planet of Pandora, a far-off toilet of a planet overrun with bandits and mean critters and diabolical corporate soldiers. You can pick from a diverse cast of characters - the ninja, the siren, the commando or the gunzerker, plus the $10 DLC mechromancer. Each plays very differently, with bonuses for particular weapons and kick-ass special abilities, like capturing enemies in bubbles of pure energy or deploying automatic turret guns to cover you while you reload.

Yeah, guns. From Maliwan's fire-spitting sniper rifles to Jakob's devastating rocket launchers, you'll find hundreds of guns. Some will suck, and you'll sell them for pocket money. Some will be so impressive that you'll have a new favorite. A huge part of the fun is looking for the rarest and most powerful guns, comparing your SMGs to find the best fire rate, reload speed, magazine size and damage rating. Basically, there's a huge variety of great loot, and finding it sometimes more fun than actually using it.

As you improve, you'll get better guns, not to mention getting a lot better at a lot of things. You'll regenerate health when your shields are full, or light people on fire when you punch them, or reload your guns whenever you kill a bandit. This is an over-the-top game, and you play over-the-top heroes. And if you're lucky, you'll play it with someone else.

Borderlands 2 has possibly the best couch co-op I've ever played in a shooting game. My wife and I are loving it. You can drive while your partner shoots. You can heal each other when you get shot down. You can share ammo and money and loot and experience. You'll snipe from above while your partner goes in close with a 12-gauge. You can catch your enemies in a crossfire. And you can do it all without having to get online, because this game works great when you're both on the same TV.

In fact, I think the main reason I'm addicted to Borderlands 2 is because it gives me something genuinely fun to do with my wife. She's got the mechromancer and I've got the commando. She drives better than I do, and I shoot the rockets like they were on a wire. We laugh at the jokes and swear when we get killed, and spend hour after hour blasting the piss out Hyperion security droids and mutated super-bugs.

So while I really did mean to play that Schlock Mercenary game - it looks like a lot of fun - I don't feel bad at all. I am having a ludicrously good time, spending time with my wife, and irritating my teenage kids enough that they go hang out with friends instead of watching television all night. It's a win-win-win. It's Borderlands 2, and it's even better than the first one.
Posted by Matt Drake at 8:04 PM