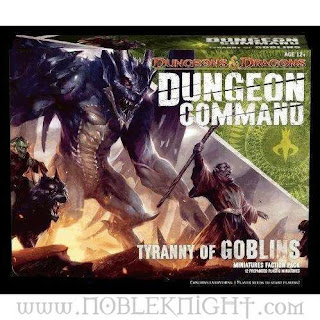 Tonight's review feels a little like I'm cheating. There are probably a dozen games ahead of Dungeon Command in my pile of stuff that I'm supposed to review, but when it comes down to it, I don't want to play those. I want to play Dungeon Command again. So when the Tyranny of Goblins set arrived, all the other stuff got pushed to the back of the list so I could send my evil hordes out to take on the heroes of Cormyr.

Having already thoroughly enjoyed the original Dungeon Command sets, I really wasn't worried about the goblins. Heck, I was really looking forward to them. But as is the case with almost any expansion release, there was always the possibility that they would either be too powerful or too weak. Too strong is how these things usually go, as new powers and new units are introduced to an existing game, but every now and then, the new stuff just isn't up to competing with the old stuff.

So I played the goblins, and my wife played the heroes. And I got my ass kicked so badly that I have to write this review standing up.

It might seem like I'm about to complain about the goblins being underpowered, but let me clear that up right now. My wife played very well, and I made mistakes. I should have sent my weaker units to gather treasure, rather than charging them into the fight. I should have played a little more defensively, and built up my forces before I sent them running across the field like a third-grader fielding a kickball. I can't even blame it on the dice, because the game doesn't have any dice. I lost because I sucked and my wife played really smart.

In fact, if anything, my loss illustrated how well balanced the new set is. If I had won with as many mistakes as I made, the goblins would have been a total train wreck. They do have some incredibly powerful units, but everyone else has those, too. They also have some really weak guys, but everybody else also has punk-ass cannon fodder. There are some incredibly cool examples of units working together - the wolf is twice as dangerous next to a goblin cutter, and the hobgoblin sorcerer is especially impressive if you keep him in the background. The strength of your team is not in how big they are, but in how you use them. You know, like a penis.

Happily, not all your fighters are goblins. Sure, you've got a good handful of goblins, but you've also got a hobgoblins and bugbears, a wolf, a troll and a huge burly demon. Yeah, that's right, the goblins have a demon. Like the other two sets, using these pieces appropriately is the key to winning the game. Your bugbear berserker is a bad-ass, but all by himself, he's cannon fodder. Manage your territory, though, and you'll be able to control the battlefield and continually flummox your opponent (and who doesn't like to hand out some good flummoxing?).

The order cards you get are also really handy, though unlike the drow or hero sets, it can be really hard to get extra cards. That's one strength the original sets have that the goblins lack, but the order cards you can get tend to be pretty darn cool. You can run faster, hit harder, and stand longer. I think my favorite was the dodge card, 'mortal wound,' which ignores the heaviest, most brutal attack - but then your guy dies at the end of your next turn, so you better make that next turn count. This was one part I did right - after my berserker was tag-teamed by some pipe-hitting heroes who should have cut him down in his prime, he managed to get one more turn. I like to imagine the looks on the faces of the ranger and cleric when the bugbear looked at the hole in his chest and started grinning. Then he killed them. Then he died.

I kind of wonder if anyone is buying these sets just to use them to play D&D. If they are, I think they're not doing too bad. The game is great, and you get 12 painted miniatures for 40 bucks. That's just over three bucks a figure, and you get a pretty decent variety. No, there are no orcs, but I'm not even sure those guys are evil any more. I think they've been turned into a goofy Games Workshop sideshow.


I still have kind of a beef with the format of Dungeon Command. We were discussing as we played how much we wish we could just buy some cards, or a few new figures, so that we could fine-tune our armies a little. It's great to get this balanced army that's ready to go, right out of the box, but I desperately want to mix it up. Of course, that's easier to do now that I have three different sets. It would be easier if I had some smaller sets, is all I'm saying.

A nice thing about the Tyranny of Goblins set for Dungeon Command is that it's not hard to figure out if you want it. If you like Dungeon Command, and want to see more variety, get the goblins. If you're buying a couple sets to try it out, the only question is whether you like goblins more than dark elves (or both more than heroes). There are no balance issues to mess it up and no difficult decisions that you'll regret later. Goblins are fun, and so are drow, and so are heroes. Buy the ones you like, or just try the game with one set, or go for broke and get them all. All I can really tell you is that the game is a blast, and now you can add goblins, and if that's not enough for you, then I'm sure there's an exhaustive but wordy summary on BGG somewhere that you can read if you're already bored with folding socks and watering the grass.

Pros:
Lots of new cool figures
A new faction with new possible play styles
Adds one more piece of awesome to a game that was already pretty darn awesome

Cons:
Same as before - I wish they had boosters

Did I say 12 minis for 40 bucks? Not if you're shopping at Noble Knight.
GET EM CHEAPER
Posted by Matt Drake at 5:47 PM

Just picked up this set to add to my other two. I really like the game, but I agree with you about the boosters, and have to wonder to myself why I need three rulebooks and triplicate treasure counters!

On the plus side, there have been some user-created creature cards appearing on BGG, for the Legend of Drizzt minis, for example. So far they don't apply to any minis I actually OWN, but I'm hopeful! I guess my point is that the community is starting to make its own (admittedly unplaytested) boosters.

Great review Matt. I am in total agreement. I love Dungeon Command.