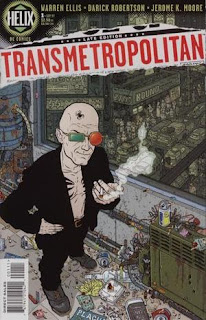 Transmetropolitan sounds like it could be really gay. And not 'gay' the way we say it when we mean something is lame, but 'gay' the way we say it when we're describing a guy who likes to wear hot pants and mesh shirts. The title alone threw me. I knew nothing about the book at all, but passed on it when I first saw it on Comixology because I thought it sounded queer as a three-dollar bill.

Then my friend, out of the blue, recommended it. He didn't provide any more information, but just mentioning it was enough to at least make me check into it. And it turns out, this has nothing to do with men wearing eyeliner, outside of the occasional character who might be a man wearing eyeliner. It's actually a sci-fi book about a newspaper reporter in the future we all thought we were going to see when I was in college.

Spider Jerusalem is an anti-social guerilla journalist with lots of tattoos and some rather trippy spectacles. He reports on the group of silly bastards who inject alien DNA to perform plastic surgery that would make Michael Jackson look like a normal human being. Then he writes about the cops who are looking for any excuse they can find to kill those goofy lunatics. He pisses off everyone who matters and uses an illegal weapon to give the president of the United States a bad case of irritable bowel syndrome (literally - he doesn't kill him, or anything, he just makes him have to poop).

As you read through Transmetropolitan, a few things might pop out at you. First, this is not a 'story' book. You're not following the adventures of a man on a mission. You're not seeing recurring villains, spandex uniforms or super powers. You're not reading an unfolding, continuing saga. What you see in Transmetropolitan is razor-sharp wit and brutal satire, with a giant side helping of social commentary.

See, Spider Jerusalem is not just some beat-tromping cub reporter. He's one of the most famous men in The City, a celebrity against his own will whose powerful writing exposes corruption and greed and stupidity and injustice. Spider is willing and able to dish out violence to get to the truth, and he has virtually no qualms about laying down a beating or a casual shooting if it gets him his story.

Spider is an interesting, if bizarre character. He is best described as mentally unstable, or if you're feeling unforgiving, outright psychotic. He adopts a defective cat that has two faces and owns a vending machine with a drug addiction. He has a spider tattooed on his head and will happily put out a cigarette in a man's eye. He values nothing so much as digging through to the truth, except possibly inflating his oversized ego (which is largely compensating for an enormous amount of self-loathing).

Speaking of profanity, which we were not, Transmetropolitan was published under Vertigo, the sub-species of DC that they opened so they could use grown-up words and occasional boobies. Spider is fond of his f-bombs, and his stories sometimes take him into the company of ladies of low moral virtue. This is not a comic book for your kiddies, unless you're that strain of parent who doesn't pay attention to what his children are reading.

However, even without the harsh language, bloody brawls or bared nipples, Transmetropolitan is still not intended for immature audiences. The subject matter sets it off - it's raw and smart and satirical, and if you're reading to see how Superman beats up Doc Ock (hint: he has to use fuchsia kryptonite), you're going to be very disappointed. The book addresses bigger concepts than you might be used to seeing - consumerism, class struggle, religion, and drugs all get the Spider Jerusalem treatment. The result is a series of powerful statements that are even more potent if you're clever enough to see the underlying contempt that Warren Ellis has for a whole lot of things we take for granted.

Speaking of Warren Ellis, which we actually were, this dude can write. He's not just entertaining. He's got chops that make Tarantino look like a high-school kid with a Trapper Keeper full of stuff he copied off the bathroom wall at a truck stop. His dialog is sometimes so intense and rapid-fire that it's difficult to read it without hearing it in your head. You'll want to stop and back up to read it again, because you'll miss nuances in the flood of brilliance. The City is suffering an information overload, and sometimes the words are just background decor - but they're never unimportant.

The art is the same way. Darick Robertson's pencils are overflowing with detail, to the point of distraction, and that's obviously deliberate. When you read Transmetropolitan, you'll want to go slow, to absorb all the chaos, the bag ladies in the alleys, the body-modders behind the traffic jams, the ludicrous billboards and flashy street signs. The City feels like a huge, ugly, angry place, the kind of place where humanity is lost because there's just too much humanity. The writing is intense and intelligent, but the art is what makes the book complete. A lesser illustrator would have allowed Transmetropolitan to be related through the dialog, but Robertson makes every panel pull you deeper into this mess of a metropolis.

Transmetropolitan is angry and funny and bitingly smart. The maturity of the writing is staggering - even without the cussing and nekkid chicks, it's firmly targeting intelligent adults. The art is amazing. All things considered, I'm not sure how the hell I missed this gem. If you like your science fiction with a side of vitriol, you'll love it. If you just want to see Wolverine wear tights and say 'bub' a lot, don't bother.

I found Transmetropolitan on Comixology, but I figure you can find it almost anywhere, if you look around.
Posted by Matt Drake at 6:25 PM

Check out his novel, Crooked Little Vein. Fun stuff, as I recall.