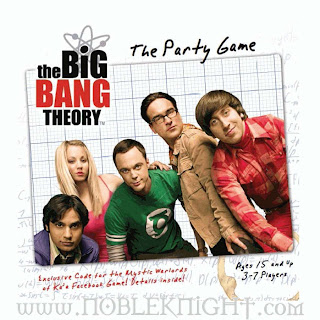 2. The Big Bang Theory. I know lots of people are apey for this TV show, but I am not one of them.

Ironically, the reason I had fun was because of the added license that I don't like in the first place. At first, I was afraid this was going to be a trivia game, which I would lose because I know virtually nothing about the show except a few names and that the blonde neighbor chick is far too cute to hook up with any of the goobers on that show (despite the fact that she does, in fact, hook up with at least one of the goobers on that show). Instead of lame trivia, and in place of the Apples to Apples cards that say stuff like 'penguin' and 'nuclear warhead' and 'this is a dumb game,' this silly party game uses ridiculous stuff that comes out of the show.

So here's how this actually works (and if you have played Apples to Apples, this will probably sound familiar). One guy takes a card and reads a word or phrase. Examples might be 'The Opposite of Sexy' or 'Fills Me With Joy' or 'What I Need.' Then the other players, who are holding a bunch of cards with other words or phrases on them, pick cards that they think will match whatever category the first guy said. The first guy chooses his favorite, and then someone else gets to be that first guy.

Now, in the case of Apples to Apples, the words or phrases on the cards are boring, lame and stupid. If you're holding a hand with 'unicorn,' 'peach fuzz' and 'lemon drops,' and the judge player announces that the category is 'evil,' you're either screwed, or you will win because the judge is apparently supposed to pick whichever matchup is the most thoroughly retarded. This makes Apples to Apples one of my least favorite games of all time, because the prize always seems to go to whoever had the most bizarrely incongruous match, and it's completely arbitrary.

On the other hand, the player cards in The Big Bang Theory game are all stupid, but on purpose. You might be holding 'Horny Engineer,' 'Monkey Assassin' and 'Hobo,' and then anything you choose is almost certain to be wacky and amusing. Apples to Apples looks like it should be serious, but instead it's stupid. The Big Bang Theory party game looks like it should be stupid, and it is, and it's funny. I laughed a bunch when I played it, because when the answer to 'Bad at Sports' comes back 'Man-Eating Walrus,' that's so stupid it's kind of awesome.

Even better, the game has this one kind of judge card that makes everybody pick two cards as their answer. The card might say, 'Made for Each Other' or 'Hilarious Battle,' and then the gloves come off and the stupid gets cranked up to eleven. Now you can match 'Princess Who Saves Monkeys' and 'Jewish Hobbits,' and it kind of doesn't matter what the original card was, because come on, that's funny.

I would not go so far as to say The Big Bang Theory makes a good party game. It most certainly does not make an original game, because the rules for this one are almost exactly the same as the rules for Apples to Apples. But I will say that if you're at a party with a half-dozen other people, and they all want to play something while they wait for the tequila buzz to wear off so they can drive home, you could do a lot worse.

For instance, you could play Apples to Apples while you watch The Big Bang Theory. That would be worse.

Players: It's a party game. It kind of requires a party.

Pros:
Amusingly silly cards make this actually kind of fun
Will probably be even better for fans of the TV show

Cons:
It's just a goofy version of Apples to Apples
Dumb (but this one, at least, is supposed to be)

Let's say you actually play party games. Let's further say that you kind of like the premise of Apples to Apples, but always wanted something that was funny on purpose. You're probably the target market for The Big Bang Theory party game, so you should go to Noble Knight Games and buy it:
STUPID, BUT IT DOES IT ON PURPOSE
Posted by Matt Drake at 9:22 PM

Of these Apples to Apples style games, Cards Against Humanity is by far the best, at least for the soulless humans who wants a dick-joke and dead-baby generating joke machine.