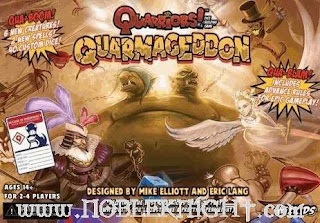 Have you been enjoying Quarriors half-a-week? I know I have! Mostly because I only had to write two reviews, and I got to play Quarriors a bunch of times. Pretty sweet deal, if you ask me.

To finish off Quarriors half-a-week (which, seriously, is just two reviews), I'm going to review Quarmageddon, because it's the only other expansion for Quarriors I haven't reviewed yet, and if I reviewed a different game, I would have chosen a really ridiculous name for my half-a-week celebration.

Quarriors is kind of a funny game. It's not like I fall asleep thinking about how much fun it is, or daydream at work about the next time I can play. It's got a few flaws that might have a Dominion fan turning up his nose, and the art is decent without being Asmodee good. And yet I play the damned thing more than nearly any other game I own. Actually, I can't think of one I play more. So strike that - I play Quarriors more than any other game I own.

The biggest thing that keeps me hauling Quarriors out to the game table is the replay factor (and the fact that my wife really likes it). Every time you play this game, you've got a different set of cards, which means a different set of strategies, which means you have to change your plan every time you set up a game. Of course, to keep that diversity flowing, you need to add new stuff to the game every now and then - which brings us to Quarmageddon.

Unlike Rise of the Demons, which brought out a brand new way to play, Quarmageddon doesn't try to fix what isn't broken (not that Rise of the Demons did, though the demon overlord did end up being handy when I needed a tire changed). The real purpose of Quarmageddon is to give you six new creatures and two new spells, so that your strategies can change a whole bunch more times. Add these new options to the already-existing elements that are in Quarriors so far, and you've got a whole hell of a lot more games before you start to see the same things pop up all the time. So at its most basic, Quarmageddon gives you exactly what you need out of an expansion - more reasons to play. That, and some place to dump a little of the extra money you have just sitting around your house like Scrooge McDuck.

If the new creatures and spells were the only additions you could find in Quarmageddon, that would be enough to justify buying it. But like that Sham-Wow guy getting bit on the tongue by a hooker, I want to tell you, 'OW! DAGGID! LEGGO!' And then, if I was that guy after he got his tongue back and made another innuendo-laced commercial for something you definitely do not need, I would say, 'But wait! There's more!' And then I would not hire hookers who wanted to French kiss.

See, Quarmageddon also includes something you didn't even know you were missing - a whole damned lot of space in the box. There's a magnificent plastic tray in the expanded box that will allow you to sort all the dice and hold them beautifully, and when you put everything away and flip the box over, everything will fly all over the kitchen and under the stove and you will be digging for it for hours. Then you will remember to put the lid on the box, you retard, because if you had, the dice would not have moved at all. The tray is even big enough to hold the next two or three expansions, which you can also lose under the stove if you're still too stupid to close the box before you start juggling it.

Remember when I said the new expansion didn't try to reinvent the wheel (probably you don't remember that, because that's not what I said, I said it wasn't going to fix what wasn't broken)? Well, I wasn't being completely honest (or I would not have been, if that's what I actually said). The best thing in the whole box is something I'm about to give you for free - the optional rules. The first rule says you can buy two dice on your turn. The second rule says that you have to cull any creatures who score. These two rules together make Quarriors approximately 116 percent better. That's an estimate, of course. There is a 2.7 percent margin for error.

You don't have to play with those optional rules, but those two little optional rules make the game so much better that you would be stupid not to use them. Of course, you could have used them before, but now that they're in print, it's more like they're official. Now the game has far, far more depth. It takes longer than a cigarette break, and you have to be really careful about your purchases. No more just buying the most expensive thing because you probably won't be able to afford it later. Now there's a real incentive to buy the cheap guys, and more than ever before, the spell cards become a huge factor.

I liked Quarriors before Quarmageddon, which is good because I've played it a bunch. But now that I add in this big ol' expansion, this game is one of my favorites. You can win with wildly clever ideas and crazy risks. Luck is nowhere near as important as it was before - they key now is to make smart buys and difficult decisions. You now have more options than ever, and your decisions matter more than they did. Where the original is light and campy, now you've got yourself a smart game that I really enjoy playing, enough that it hits the table in my house about twice a week.

If you have to choose between Quarmageddon and Rise of the Demons, I have to wonder how wise it is to spend money on games at all, because you must be pretty broke. Rise of the Demons is cheaper than a medium pizza. But if you're dead-set on spending money you can't afford, Quarmageddon really is more fun. Honestly, if you like Quarriors, get 'em both. They'll give you more replay and make the game more fun. If you need more reasons than that, what the hell are you playing games for?

Pros:
Give you lots more reasons to play lots more times
Fantastic storage with room to grow
New optional rules add so much depth to the game, they should have been there from the beginning

Cons:
Can't think of any

Quarmageddon is more expensive than Rise of the Demons, but not only is it worth it, I happen to know where you can save a bundle on it. Yeah, that's right, Noble Knight Games.
QUARMAGEDDON FOR EVERYBODY
Posted by Matt Drake at 8:42 PM