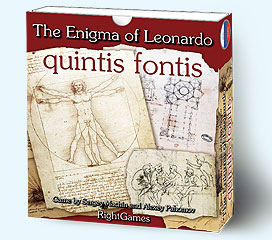 Quintis Fontis is not the name of the game I'm reviewing tonight. The actual, full name is 'The Enigma of Leonardo: Quintis Fontis,' which is far too long to type more than once. For the rest of this review, I will call it Queer Font, which is not the name either. That is actually a computer typeface that prefers the company of fonts of the same gender. So never mind, we'll stick with Quintis Fontis.

Quintis Fontis is kind of like an expansion, but more like a sequel. You don't need the original Enigma game to play, which is nice because the original blows sweaty goats. Quintis Fontis uses many of the same concepts as the original, and all the same art, but it's a better game in every possible way. That's not me saying the game was awesome; when your source material is a game that could really only appeal to mentally-challenged fifth-graders, just being playable is a monumental improvement.

Instead of each player having a little tic-tac-toe grid, now there's one common five-by-five grid. And instead of just replacing a card every turn, you can play new ones, if you can find room, or cover old ones without taking the one that was there. Plus there are some rules - you can't cover or replace a card unless you can match one of the two symbols on it, and that makes for a little more complication. You need three in a row to grab the matching scoring counter, and then the next guy needs four, and the player after that needs - wait for it, because I know this will be a surprise to everyone - ice cream. No, five.

OK, so that's the basic rules summary, so that you understand basically what kind of game you're playing here. It's like super tic-tac-toe, but way more frustrating. Since you can't play anything that matches what the last guy played, you might plan your turn for ten minutes, and then as soon as the guy who goes right before you plays, most of the cards in your hand are unplayable and now you have to come up with a completely different play. This creates a situation that most gamers know pretty well - Take Your Effing Turn Already-itis. You can't plan ahead, because the player before you can hose you without even trying, and then you have to take five minutes trying to figure out any place on the table where you've even got a legal move. Meanwhile, all the other players will be planning their turns, so that when it gets around to them, they can throw out whatever plan they had because now theirs won't work, either.

Happily, the game doesn't drag to a screeching slow until the end, so for most of the game, it's actually pretty cool. You'll set up three or four plays ahead of time, mixing up ways to grab a bunch of cards in a row. You might stock a few different places on the board, to prepare for a future turn when you swap out a card and surprise everyone by scoring twice in a row. There's actually some pretty engaging card play at the start, and it intensifies as you approach the finish line.


And then you actually get within shooting distance of the end of the game, and then nobody can find a play, and then you'll start wishing someone would win so that you could play something else. You will probably have a good time for most of the game, though, so I recommend cutting the number of cards you need to win. That way you blaze through all the fun parts of the game, and then stop right before it really starts to suck.

I was actually more pleased with Quintis Fontis than I thought I would be. Having played the original Enigma, I was expecting an experience roughly akin to watching curling on television with the commentators speaking in French - you know, boring. Instead it was more like watching a lightly entertaining sitcom with all the commercials shoved into the last five minutes. We all agreed that we did enjoy most of the game, and then we all agreed that we wanted it to end.

I have no idea what Quintis Fontis means, but if it means 'considerably more fun than the other game, but still kind of flawed,' I would say that the game was named correctly. Unfortunately, something tells me that my translation may be slightly off.

Pros:
Better than the original (which isn't saying much)
Some neat planning and tricky plays
Like a game of Memory where you can see all the cards

Cons:
Rules are confusing (because they were Russian before they were English)
Really drags at the end

I can't really recommend Quintis Fontis unless you're drawn by the novelty value. In case that's you, here's the link:
http://www.russianboardgames.com/buy_now.html
Posted by Matt Drake at 8:24 PM