Board Game Review - Gears of War 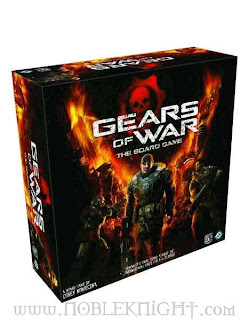 As many of my more devoted readers will know (thanks, both of you), I am a huge fan of dungeon crawl games. It's my favorite kind of game. The low-rent combination of a cheesy story and intense simulated bloodshed draws me like a mosquito to a bug-zapper. And this is why, when I read through the rules for Gears of War, I knew I was going to like it.

I was right, in case you were wondering. I did like it. I liked it a whole hell of a lot. But the most important thing about Gears of War is not that I liked it. The thing to remember is that it is a cooperative dungeon crawl game, because if you approach it thinking it's something else, you are probably not going to like it very much. Because it's not something else. It's a dungeon crawl with guns, and the guns have chainsaws on the end of them, and also there are monsters.

For those of you who played the original video game, the story for the board game lifts pretty much straight off the top of the console smash hit. Alien bodybuilders who take way too many performance-enhancing injections invade the planet, and it's up to human steroid junkies to shoot them and cut them in half with chainsaws mounted on the ends of their guns.

(In case you didn't play the video game, it is worth noting that every single character in the original was ripped like one of those ambiguously gay muscle-men who pose for the cover of Men's Fitness and look like they could lift the entire Russian hockey team over their heads, and tear phone books in half and then preach about how much they love Jesus. Even the aliens bulged with absurd muscles, as if Rob Leifeld drew them all. In their case, they were also kind of gross, but still very, very fit. But probably sterile from ingesting so many steroids. In fact, I would wager they initially attacked to find something to eat that was not a protein shake.)

Obviously, this is a game made for men who do not realize that they are no longer adolescent children. Which makes it absolutely perfect for me. You can even play it solo, but I would not do that if I were you. Because it's not much fun to play with yourself. Well, I mean, it can be, but not if you're playing Gears of War at the same time.

No, the real awesome of Gears of War reveals itself when you play with two or three other people. Those people will probably be male, since the game is basically channeling more testosterone than a breeding camp for angry race horses. If you can get someone to bring a six-pack of some tasty local microbrew, and someone else to show up with a bag full of tacos, and you can just relax and not care if you get hot sauce on the cards, Gears of War will make you glad to be a violent bastard.

I should note here that the theme is what gets you about Gears of War, not necessarily the rules. The rules are really just the platform by which the adventure arrives in your game room. They're quite straightforward, not particularly original, and still very effective at making you feel like a team of over-muscled killers mowing down enemy aliens like a fat guy with a bag of Cheetos. If you're looking for a particularly challenging tactical exercise, or you're hoping to prove your mental superiority through your mastery of cardboard squares, Gears of War will not deliver. You play this game for the story.

You also play this game to have fun with some fellow gore-happy jackasses, like me. It's not fun to play solo because to really enjoy it, you need to have those moments where you're forced to choose between shooting a couple aliens or helping your buddy get up off the floor. The fun in a cooperative game is cooperating, and this is especially true in Gears of War, where your action hero is going to spend almost as much time bleeding out on the floor as he is cutting monsters into chunky goo, and it's up to your fellow roidhedz to get you back on your feet.

Gears of War is a game that is all about the adventure that you will have blowing things all to hell. You'll throw grenades, fire monstrous shotguns, rattle off hundreds of rounds of ammo, and after all that, the odds are about even that you'll wind up with your entire crew dying of advanced lead poisoning. It's brutal, exciting, and if the cards and dice don't like you, really kind of hard. But you won't care if you won or lost, as long as you got to blow giant holes in a horde of invading monsters. It's got plenty of plastic, cool cardboard dungeons, lots of neat art, and more bloodshed than a Robert Rodriguez movie. If you like bonding with the guys, perpetrating massive violence, and laughing when you die, you really should try Gears of War.

Cons:
Not exactly a thinking man's game
Solo play is thoroughly pointless
The hero minis are virtually indistinguishable from each other, so you'll spend the whole game squinting at them and going, 'is this me?'

Beat your chest and start your chainsaw, then run over to Noble Knight Games and grunt in a manly way as you buy a copy of Gears of War:
GRUNTING MANLY
Posted by Matt Drake at 5:17 PM

Love this game! Definitely one of the best coop DC games out there.

Another 'sold' review for me. Just last night after playing some Talisman we were talking specifically about Gears of War and that we should pick it up.

Incidentally I have, in fact, ripped a phonebook in half before. It was down the spine mind you.

Great review as always. And this game is high on my whislist, I will get it someday.