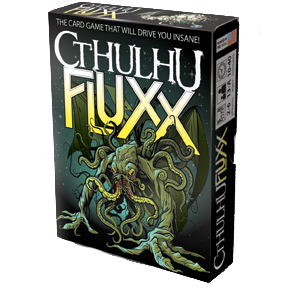 Looney Labs needs to have a contest to decide on a theme for their next Fluxx game. They pop out one of these broken record card games about every six months, and they've based them on everything from alien invasions to smoking reefer. What they really need to do, to mix it up and make it interesting, is come up with a version so fresh and original that people the world over stop and go, 'hey, that is fresh and original, and not all the same freaking thing we've seen a dozen times before.'

The latest entry in the not-so-fresh Fluxx line is another theme that has been used extensively and proven to be popular - Lovecraftian horror. It amuses me considerably that a source of horror as terrifying as evil sleeping deities who corrupt humanity and drive them completely insane has become a series of running jokes, to the point that the entire concept can be slapped onto a light card game that pays almost no attention to theme in the first place. And then we can play this game, and laugh about shapeless, tentacled beings that will completely destroy the entire world and swallow our souls like Jolly Ranchers.

If you're a fan of Fluxx, Cthulhu Fluxx is pretty cool. In addition to the normal stuff that we've seen a dozen times, now you've got an impending doom counter and ungoals that will make everyone lose. Several of the creeper cards have little doom-flavored hourglasses, and if there are enough of these on the table at the same time as the right combination of elder gods and an ungoal, the game ends with everyone flipping the table at the same time.

One variable that never seems to be consistent from one edition of Fluxx to the next is the art. The graphics in the original are culled from a crappy clip art collection, and the illustrations in Wizard of Oz Fluxx are just plain weak. But apparently Looney Labs got a good budget for Cthulhu Fluxx, because the art in this game is really good. If I was starting a comic book company, I would see if this cat would draw for me, because the art in this game beats Arkham Horror for being fun and imaginative.

If you don't like Fluxx, Cthulhu Fluxx isn't going to change your mind. It's still that same thing where a game could take an hour, or it could take five minutes. There's virtually no way to put together a winning strategy, and while it can be distracting entertainment, it's also about as deep as a Taylor Swift song (good thing that girl is cute). The doom thing and the ungoals might be new, but the overall experience of playing Fluxx will have you signing The Talking Heads and yelling, 'same as it ever was!'

What Looney Labs needs if they really want to kick some life into the Fluxx line is a theme that really grabs people. Cthulhu is interesting, but it still only lets the game add a couple rules that might not even come into play. If we want to see a Fluxx version with some backbone, we're going to have to help them out a little. So starting immediately, I am kicking off a Twitter campaign to come up with good Fluxx ideas. Give me your ideas with the hashtag #fluxxtheme, and maybe we can help Looney Labs invent the next great game.

I'll start with a couple here:

That's a good start. Now, to the Tweet cave!

Cons:
Fluxx is starting to get very boring when not even dread Cthulhu can scare some life into it

You want to see something that will drive you insane? No, of course not. Who would willingly choose to go insane? Unless you could claim worker's comp or something. Hmm. That might merit some investigation. In the meantime, you can run over to Looney Labs and check out Cthulhu Fluxx, which is not coming out until GenCon.
http://www.looneylabs.com/games/cthulhu-fluxx
Posted by Matt Drake at 8:48 PM