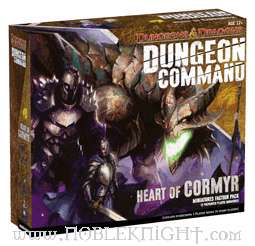 The very first time I played HeroScape, I knew it was something special. It was a glorious combination of toys and excellent game design, with great plastic miniatures, modular terrain and simple rules that provided incredible depth in terms of strategy and tactics. I mention this because I just played Dungeon Command, and immediately thought of HeroScape - because once again, I've played something special. So for the rest of this review, I'll be making lots of references to HeroScape. There are a lot of comparisons to be made.

Dungeon Command is a tactical miniatures game played on a square grid using prepaints repurposed from the old D&D Minis game. Each pack comes with twelve miniatures, which is coincidentally exactly how many figures you need for one side. Right now, there are only two - Heart of Cormyr and Sting of Lolth. The first one is the heroic set, with rangers and rogues and archers and knights, and the second one is dark elves, even though it sounds like it should be the sting of creating a typo while laughing at something you read in a chat room. It's an unfortunate coincidence that when the creators of the drow elves were inventing their dark goddess, the internet had not yet come up with a three-letter abbreviation that would tell people how amused you were.

The reason Dungeon Command reminded me of HeroScape is because it's an incredibly similar game. Modular terrain in the form of interlocking cardboard tiles sets the stage for a battle between preprinted plastic miniatures. The rules are uncomplicated and easy to learn, and individual cards provide different abilities for the various monsters and warriors who will litter the battlefield with their bloody corpses.

However, Dungeon Command is actually smarter than HeroScape. Die-hard Scapers may want to take me to task for that one, but Dungeon Command is an absolutely brilliant tactical skirmish game. Complaints levied against it might seem to highlight potential problems, but having played five games of it in the last three days, I can tell you that they are not only a non-issue, they're not even complaints.

For instance, being on a square grid might seem to require more complicated rules, where you either have to allow diagonal movement (thus rendering specific terrain segments largely irrelevant) or come up with some half-move malarkey that makes you do math every time you move around an obstacle. Dungeon Command goes with the first method, which would seem to create a considerable problem, until you see how often large figures enter the game, and suddenly the maneuverable single-space minis who can skirt obstacles are granted a considerable advantage against the bulky monsters who could pound them into paste.

You might also hear complaints about people who miss their dice. Dungeon Command resolves all combat with cards, and not even blind card draws, but stuff you play right out of your hand. It might make it seem like they've made a dungeon brawl into a European game - but that would be incorrect. The cards still allow for a lot of luck, but it's more about whether your opponent is holding the card that will let him save that little halfling sneak than a measure of whether the dice like you that day.

In fact, the cards add a hell of a lot to this one. Where HeroScape makes you hit the same guy over and over to try to make the odds go your way, Dungeon Command makes you think. Should you lead with your weak attack, to try to draw out the dodge card before you hit with the major beatdown, or can you afford to combine the efforts of two different bruisers to go for the all-or-nothing instant kill? And from the other side, do you play your great save right now, and save that swordsmaster, or should you let him die so you can make sure your priestess lives long enough to start throwing giant spiders like a barfly playing darts? In HeroScape, the dice tell you when your warriors get hit; in Dungeon Command, that decision is up to you (and a little luck drawing the right cards doesn't hurt).

The cards make all the difference, in terms of game play. Play the right card at the right time, and you'll beat your opponent into the mud. Play it at the wrong time, and you not only waste it, but you leave yourself open to a brutal counterattack. Mistakes in Dungeon Command are punished harshly, because you can't count on the dice to save your bacon if you make a stupid move. Advance too far, and you let your opponent dictate the terms of the battle. Hang back, and you let him run all over the place, picking up the deceptively valuable treasure chests. Play to your strengths - if your commander lets your warriors haul ass all over the board, you can try the distance game, but if you just get a lot of order card flexibility, push your foe to weaken his hand.

There is an enormous amount of strategy in Dungeon Command, and an unending array of tactical decisions. Shifting just one space to the left could make all the difference between killing the umber hulk and getting flattened by the copper dragon. Determining the best way to prepare for an assault is crucial - make a plan and stick to it, but be prepared to respond to your enemy's maneuvers. This is actually deeper and more satisfying than HeroScape, and with only slightly more complexity. It is a masterpiece of tactical game design.

So should you sell all your HeroScape and buy Dungeon Command? Well, that answer is in two parts. First, I lost most of my Scape in my house fire, so if you're selling it real cheap, you can sell it to me. But more importantly, no, you should not sell HeroScape, because you're not going to get addicted to Dungeon Command, not like you did with HeroScape, where you would spend all day building maps and armies and not even playing the game, or where you would plan entire parties where twenty people all came to your house and nobody played anything but HeroScape. That won't happen with Dungeon Command. You might play it a dozen times before you get tired of it, and the problem is not that the game is weak, because it's not. It's fantastic. The problem is the stuff you use to play.

There are exactly two factions out right now, with plans for more to come out about every two months. So right now, you've got the Laugh Out Loud spider clan and the Heroes of Corny Dog, and you've got either the dungeon or the grassy battlefield. That's it. You can play this one as many times as you want, but it's always going to be the same people fighting on the same turf. There are rules for customizing your squad, but if you want to do that, you have to buy the same exact set you already own all over again. Then you get two drow priestesses, but you also have four house elves when you were probably going to cut them anyway. You'll have a huge pile of miniatures you don't need that you bought just so you could double up on the dwarf cleric. And even then, the only difference is that you have the same guys, but in different numbers.

And the terrain tiles might be modular, but there are only like six different ways you can put them together, so you've really only got two maps. There are no alternate scenarios, asymmetrical battles, or clever play modes. You won't string battles into campaigns. In other words, all the reasons you found to play HeroScape seventeen times in a weekend are gone, aside from the fact that Dungeon Command is actually a better game. And frankly, that sucks.

In a perfect world that I would make for myself, Wizards would release two boosters to go with each starter. These would have maybe four miniatures and a handful of order cards, and then you could actually play with completely different armies. You could surprise your enemies with dudes they never saw coming, you could combine different abilities in new and interesting ways, and come up with all new ways to pull your enemy's kidneys out through his forehead. Maybe they could come out with map boosters, too, with a bunch more tiles that would allow each player to select a bunch before the game starts.

There are so many possibilities for Dungeon Command that I am sad to see the physical format disappoint me. Customizing my battles should let me actually customize something, instead of just changing how often you see particular soldiers. Mixing up the map should be more than just putting a room off to the side instead of in front of you. The game is absolutely brilliant, but I'm still only going to play it a dozen times before I'm tired of it.

2 players (up to four if you buy four sets)

You could pay 80 bucks for both sets, retail, but Noble Knight Games has them for just over 30 bucks each.
TACTICAL SKIRMISH GENIUS
Posted by Matt Drake at 7:57 PM

That was a great review! A complaint though ;) - are you softening up in your old age? This review seemed more tame than usual.

I actually made a lame assumption when I laid this game out to play with my son - that the dice were missing! I actually grabbed a couple of 20-siders thinking they expected me to supply them - an idiot assumption.

Is there anything about the game rules that require the enclosed maps? Can any square-based map do, thus at least allowing a little more variety. I know that I have a big stack of maps from adventures and Dungeon magazines that could use some gameplay lovin'.

Actually, that is a good point. You could probably use other maps, as long as they had clear indicators for hazards, obstacles, and difficult terrain. I think the old D&D minis maps had those, and I'm pretty sure there were some additional map sets published for dual use. I think I had a couple, before the fire.

And Digiconda, I will try to make sure the next one has more boob jokes.

The old D&D minis maps use the same terrain iconography - they should work great for Dungeon/Outdoor Command, maybe even lead to highly unusual scenarios.

I guess you can also make great maps of Caste Ravenloft/Wrath of Ashardalon/Legend of Drizzt dungeon tiles.

The Dungeon Command tiles are compatible with the D&D Adventure Game.

In a lot of ways, Dungeon Command is an attempt to revive and revise the old D&D Miniatures Skirmish game. My suggestion to the OP is to revisit this in 1 year, after more sets enter circulation, and then re-assess its replay value. Right now, sure.... there are limited customization options. In a year, we'll have 5+ sets in circulation... and since there are no faction requirements, you can use any of the pieces together in a warband.