Board Game Review - Fury of Dracula 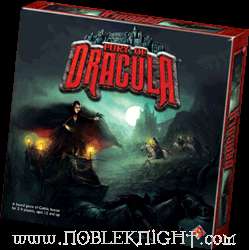 Dracula is pissed. I mean, he's royally tweaked off. You might go so far as to say he's furious.

And why is the master of darkness so cranky? Well, a few years back, somebody shoved a wood pole through his chest while he was sleeping. That's enough to ruin your day. And as if that wasn't bad enough, the old fart who was holding the spike was getting an assist from the chick Dracula was trying to bang. He had this dame all picked out, and then she helps some self-righteous, busybody asshole try to smoke his ass while he was just trying to catch some beauty rest.

Well, those prissy hero-types are in for a surprise - Dracula's back, and this time he's not going to start showing up at debutante balls and getting all moon-eyed for some teasy skirt. This time, he's going to build an army of walking dead, and when he gets done, Van Helsing and his little Scooby gang had better watch their backs.

That's basically the opener for Fury of Dracula. Dracula has a burr up his ass and intends to wreak a little unholy vengeance, and so he travels all over Europe, recruiting minions and making new vampires and causing all manner of mischief. The heroes who tracked him down the first time are hot on his trail, though, making Dracula seem less 'furious' and more 'askeered.' Dracula hops all over the place and the heroes close in on him, trying to corner him before he can get his vamp army up and running.

It's an interesting game with an interesting play dynamic (play dynamic is a phrase I just coined, because I recently had a very dull meeting where we discussed paradigms and synergies, and I was waiting to hear someone use the word 'dynamic' to describe something that is not the least bit dynamic so that I could know I had died and gone to a gray corporate Hell). One guy plays Dracula, usually the person who knows the rules the best. Everyone else plays individual heroes, and if they can catch Dracula and stop his reign of terror, this whole side of the board wins. It would seem that the odds are very much in favor of the do-gooders, since they outnumber Vlad Tepish four-to-one.

Fortunately, the game is actually quite balanced, and everybody needs to play well if they hope to win. Dracula can outwit his opponents and lay all manner of deadly traps, while the heroes can build arsenals of helpful weapons and make friends that will help them overcome the obstacles Dracula throws in their paths. A couple poor moves could put Count Chocula right in harm's way, while a few bad plays could send Van Helsing's super-crew to the hospital with injuries sustained in fang-related violence.

When the game starts, things might look pretty rosy for the Transylvanian bloodletter, but once the heroes catch his scent, he'll be running all over the place, shagging it as fast as he can to keep Van Helsing and his crew off his back long enough to eat a couple people like Five Hour Energy Drinks. It's a race against time, because if Dracula lasts long enough, he wins by default, and if he can manage to throw a beating on a hero or raise up a couple sexy Elvira vampire honeys, he'll speed up the clock. The heroes have to fight Dracula if they hope to win, but when they do finally corner him, they have to be careful, because he is one mean motor scooter, especially if you catch him at night.

A few things make Fury of Dracula work exceptionally well. For starters, Dracula doesn't actually move on the board. He knows where all his opponents are, all the time, but his movement is accomplished using a deck of location cards. The only way the hunters know when they've caught Dracula's trail is when they enter a city and the bad guy player says, 'Oops, hold on, you just got attacked by a pack of wolves, and they ate your arms off.' If the Big D goes to sea, he has to announce that he's on the water, but since the water areas are really big, that doesn't narrow it down much. Plus he has plenty of special abilities that he can use to screw with his opponents and throw them off the scent.

There's also a nice balancing aspect in the items and event cards. One thing the heroes really need to do is get armed with a full array of pistols, crucifixes and wooden stakes, in addition to finding helpful event cards that can turn Dracula's man-eating wolves into harmless puppies. But Dracula has a ton of ways to steal all those wonderful widgets and counter those handy events. In fact, when the heroes search for event cards, they draw from the bottom of the deck - because they might end up helping their immortal enemy instead of themselves.

The end of Fury of Dracula can be pretty tense, with Dracula rushing the clock and the heroes breathing down his neck, or it could be almost anticlimactic, with Dracula just going, 'hey, check it out, I made a vampire, I win.' But even if the end of the game isn't a nailbiter, most of the rest of the game is pretty exciting. You'll have plenty of opportunities to groan and curse, like when you set up some awesome trap for a badly wounded hunter and then watch it utterly fail, or when you finally corner the evil bastard and he turns into a wolf and runs farther than you can chase him. It's quite fun, moves fairly fast (unless someone at the table waits until his turn starts to even read his cards, and everyone else just sits there saying, 'you're just doing that now?'), and it sticks around long enough to be enjoyable. You won't finish in twenty minutes, and you won't want to. You'll be glad of the two hours it takes to play out, because like most of my favorite games, Fury of Dracula fits that old cliche about being a journey, not a destination.

The only real complaint I could seriously level against Fury of Dracula is that the name seems a bit deceptive. When I play a game with Fury in the title, I expect a little more egregious violence. I thought Dracula was going to come out like a Mexican wrestler on Cialis and industrial rock, all angry and violent and full of anger. Instead he just kind of runs like his ass was on fire and his balls were catching. I know that's how the game is supposed to work, but the name made me think I was going to get to be tearing around with a machete and a flamethrower. As long as you know going in that Dracula's fury is making him hide like a frightened hamster, you won't get your hopes up. Fury of Dracula is a very fun game, and I really liked the hide-and-go-screw-yourself mouse hunt. Even if Dracula seems more 'running scared' than 'furious anger,' it is a very clever game, and a great way to kill an afternoon.

Pros:
Since all the heroes always get played, scales just fine for any size group
Fun cat-and-mouse sneaking game
Lots of twists and turns
Nice balance of luck and being smart

Cons:
Does not feel very furious

Fury of Dracula is usually a 60 dollar game, but if you run over to Noble Knight, you can save ten bucks on it:
SAVE TEN BUCKS AND STAKE A VAMPIRE
Posted by Matt Drake at 7:21 PM

Nice review. I've always thought about getting this one way back when BGGers were circlejerking over the few $220 copies on eBay, but every time I read the rules it seemed kinda lame. So it's good to know that the concept translates into a pretty good game.