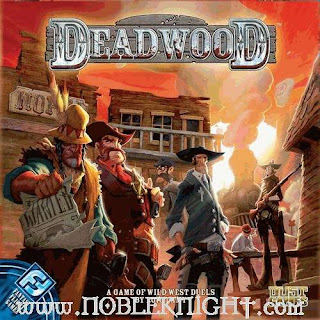 I don't really believe in kharma, aside from that stupid 'my kharma ran over your dogma' bumper sticker, and then it's just because it's worth a giggle. But if I did believe in kharma, I would say that it was out to teach me a lesson.

My last review, where I discussed Rune Age, had me questioning whether Fantasy Flight was even trying to make good games. And then I go out Saturday and play Deadwood, a recent FFG production, and expected to be very disappointed. Instead, kharma (if I believed in it) came back and made me look stupid. Which wasn't necessary - I look stupid often enough that I rarely need help.

There were two reasons I was pretty sure Deadwood was going to leave me underwhelmed. First, it's a recent FFG game, and I've been kind of unimpressed by some of their recent efforts. But second, and this was the bigger problem, was the fact that the game is historically crap.

In Deadwood, you're in the famous town in South Dakota. The train is coming through, and the player who has the most money when the train shows up is going to get even richer, so you all gather your cowboys at your ranches and get ready to fight it out while you build the town. If you know just a smattering of history regarding the actual town of Deadwood - as in, your entire exposure was the HBO show that featured lots of girl parts and profanity - your head may be about to explode.

Point one: Deadwood was deep in Indian territory. There were no trains. It was technically illegal to even be there. The railroad didn't come through until 1888, and by then the town had more than 5,000 people.

Point two: Deadwood was a mining town. All the land in the area belonged to the Lakota Sioux, and nobody had enough land to raise cattle. Besides that, it was in the Black Hills, which were aptly named for being something other than flat, and so were not conducive to raising livestock. So no cows, no ranches, no cowboys. Lots of brothels, though. Had they replaced the ranches with cathouses, it would have been a lot more historical (and how awesome would it have been if the cowboys had been replaced with soiled doves? Way more awesome, is how awesome).

So right off the bat, any actual history has gone directly out the window. They still put Wild Bill Hickock in the game, even though he had been dead for years when the train showed up, and so I was prepared for this to be another sloppy mess.

I was wrong. It's a smart, fast game that basically pulls inspiration from every Euro to ever bore a warmonger to tears. You'll send workers… uh, cowboys, out to the town to claim buildings, and sometimes, build more of the town. You can challenge your opponents for control of a location by getting in shootouts. There's a little bit of theme, but it does its best not to take itself seriously, and never gets in the way. Which is good, because it's so far off as to be offensive to any who actually knows the difference between a Winchester and a Henry.

Even though Deadwood is basically a bunch of other gaming ideas rearranged into something else, it's still a surprisingly fun game. There are plenty of different strategies you can take to win the game - you can be the confrontational gunfighter, and put your effort into eliminating the competition. You can try for the quick win and surprise come-from-behind. You can push for the full game, depriving your opponents of their bonus bucks. There are plenty of ways to play this one, and they're all fun.

The thing that really took me by surprise is that Deadwood is incredibly efficient, and wonderfully intense. It might seem like you're not doing anything, and then you look at the board and realize that you might have two turns left. It really took me by surprise, because I was expecting a couple hours wishing I could be pulling glass out of my feet. Instead we finished two games in under an hour, and had loads of fun both times.

Now, because this is essentially a European-style game, readers might be thinking it's a puzzle game, with minimal interaction and deep thinking. Happily, that's not the case. There's loads of luck, if you're the gunfighting type, and you can totally kill your enemies. You can boot people out of their nests to grab control. You can swindle and cheat and fight and kill and then go to church so that the law quits thinking you're bad people. It's actually fairly high-powered, and sweeps past so fast you'll want to play it again.

Deadwood is one of those games where the game play is on the cards, or in this case, the buildings, so just reading the rules isn't going to tell you how it plays. That's another reason I was surprised - many of the buildings can be game-changers, where you might be expecting them to be subtle or bland. Without seeing how the laundry and the churches can be combined to clear your name after you mercilessly slaughter your foes, or how quickly you can blow through the stack of wanted posters, or how rewarding it is to control the sheriff, there's no way to see how exciting the game can be. (To harp on a previous point, it would have been even better with hookers.)

I know fans of confrontational games are probably thinking how this doesn't sound like their cup of tea, and frankly, I can't blame them. Normally, I would recommend a game like this only to people who can really get behind games about farming or delivering tea. Deadwood is both completely derived from other games, and extremely European in flavor (going so far as to be designed by someone who thought the entire American West was an episode of Rawhide). And yet even with those two big strikes against it, I would happily play this one with any of my friends, with no reservations, because unlike most games with those two painful flaws, Deadwood is actually very exciting to play.

Honestly, I expect this to be a tough sell. I don't really think people are going to rush out in waves to buy a Euro-style game about the Old West that includes worker placement and money serving as victory points. And that's fine, but here's another incentive - since it's part of the Silver Line of FFG games, it's actually almost affordable, as opposed to those huge boxes full of plastic aliens and geomorphic tiles that will set you back more than your cell phone bill. It's casual and still tense, quick and still engaging, smart and still confrontational. I am rarely completely surprised by a game these days, and I am very happy to eat my words about Fantasy Flight being horribly lazy.

Well, they're not lazy about game design, anyway. But ten minutes of Wikipedia would have told them it should have been called Dodge City.

Pros:
Interaction that seems almost out of place in what is basically a Euro
Neat art
Tension that will surprise you
Far more fun than I expected

Cons:
Basically a Frankenstein monster made out of parts of a bunch of other games
Actual history is blatantly ignored

If you want to try Deadwood (and I recommend it, it's actually much better than it has any right to be), run over to Noble Knight Games and pick one up:
SETH BULLOCK IS ROLLING IN HIS GRAVE
Posted by Matt Drake at 9:10 PM

I don't think that you are that far off in your comments regarding FFG - this is a rebranded Dust Games design! It is a great little game that puts other FFG titles like Rune Age to shame.

Ah, this is coming late, but thank you so much for the positive review of this game. I saw it at Target just after Christmas on clearance for $15, so I ran home, looked up your review, and decided to go for it. I'm super-happy that I did--my eight-year-old says it's his favorite game of all time, and we're both kind of obsessed with it. It may not be historically accurate, but it feels like the Old West, right down to the wooden dice. We love it.