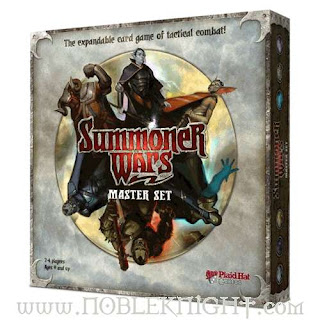 If you need an example of how to release a reboot, just take a gander at Plaid Hat Games (incidentally, 'taking a gander' was originally a phrase that meant 'urinating on a goose', and when done properly, tended to draw a crowd). (Also incidentally, I made that up.)

Plaid Hat Games makes Summoner Wars. In fact, the company was created to sell Summoner Wars, although they're branching out now with a new game coming out real soon and more in the pipeline. But Summoner Wars is still the flagship, and when Plaid Hat decided to break out a new introduction set, they did it with some serious style.

Some companies, when they want to remake an older-but-successful game, just reprint it, and maybe add some rules. Not the case with Summoner Wars. The new Summoner Wars Master Set can be used as-is to play the game, but it's also a must-have if you're a fan of the game. If you've never bought any Summoner Wars, the Master Set is a great place to jump in, and if you're already a fan, you're going to want it badly enough to donate sperm (or eggs. I'm not sexist. Well, OK, I kind of am sometimes, but if I was always sensitive, I couldn't call the site 'crassly opinionated' could I?).

The first thing you'll see when you dive eagerly into the Summoner Wars Master Set is that the board is simply fantastic. My biggest problem with the original game was that you had to play on this big paper mat that would never lay flat, and I had to remove a window in my house just so I could put the glass on top of it (that part, I did not make up. I really do put an old window on top of the paper mat when I play Summoner Wars. Or I did. Now I have this new kick-ass board, so the window is retired).

Once you get the board out of the box, though, you'll see the real reason you simply have to own the Master Set - six complete decks with six brand new factions. This isn't just a reboot. You're almost doubling the number of factions in the game, and in what I personally consider a nearly impossible feat, every new faction is not only balanced, but incredibly interesting and brand spankin' new.

Take, for instance, the Benders. Every character in this faction can shoot, which makes them uniquely dangerous. Unfortunately, they're not all particularly strong, and they are terribly fragile. But the reason you're going to play the Benders is because their psychic abilities will completely ruin any chance your opponent might have to make a decent plan. You'll steal his warriors and use them against him. You'll swipe his best actions right out of his hand. You'll move his guys and rearrange the board until his own guys are bumping into each other. And then it won't matter how fragile your Benders are, because nobody is ever going to get close enough to swing at them.

Of course, if your opponent is playing the Shadow Elves, he'll give your Benders a run for their money. These guys are all cheap as dirt, so they'll spawn all over the place and run amok. They're fast, too, and while most of them fall down pretty easy, they do have one powerful secret weapon - a four-headed dragon that is the most frightening champion I've seen so far.

There are new goblins and orcs, but they're a cool tweak. The Sand Goblins are actually a little on the pricey side, and while they're still conniving, cowardly little cretins, they're also bad-ass motor scooters. They have a fascinating array of interesting abilities, and present an entertaining and balanced faction that can play offense or defense in equal measures.

The Swamp Orcs, on the other hand, are a thoroughly fascinating faction with a fairly narrow scope. Their talents derive primarily from the use of vine walls, an addition to the game that is exclusive to this new faction. They can use their event cards and some of their abilities to bring in these vine walls almost anywhere, and then hide in them for cover, jump out of them to ambush foes, and practically cheat your opponent right out of his win. Also, they're a blast to play.

If you prefer a more defensive game, the Mountain Vargath are tough as nails and will do a great job of wearing down your opponent. They'll smash opponents back to their own side. They'll protect their side of the board with terrifying efficiency. And when they decide to break loose and bring the pain, the Vargath are a magnificent juggernaut of violence.

If you're keeping a count, you can probably see that I'm on the sixth faction. And I saved the best for last. The coolest new faction is the Deep Dwarves. And the reason they're the coolest is because they're probably the hardest to play well, but they're going to be wicked tough to beat if they're played well. Every card has an ability that relies on you having magic, which means that you're going to have to bank magic every turn if you're going to make them work. Happily, the summoner for the Deep Dwarves can automatically generate magic right out of your discard pile, as long as you don't mind going easy on the attacks for one turn. Basically, if you play these guys wrong, you might as well line them up and shoot them, but if you play them right, the Deep Dwarves are going to open whole shopping carts full of whoop-ass.

Basically, the new Summoner Wars Master Set is a no-brainer, gotta-buy-this game. If you haven't played before, this is the perfect place to jump in. If you have every card made so far, you're going to need the cards in the Master Set. If you play casually and just pick up a little here and there, the Master Set has so much variety and replay value that you can get months of enjoyment just out of the one box. If you like games, you should get Summoner Wars. It's that damned good.

2 players (4 if you want to play partners, but you'll need another board)

Pros:
Six new, brilliant factions
Fan-freaking-tastic art
Balanced and interesting, the new stuff brings more to the table than you would think possible
The new board is really nice
You can fit everything you've bought so far into the box

Cons:
No. There are no cons.

Want to know how hot this Master Set really is? Noble Knight is sold out of them. But if you watch their listing, they'll have it back, and they'll have it at a discount.
WAIT FOR IT
Posted by Matt Drake at 2:59 PM

You'll thank me once you play it.

Holey moley, those swamp orcs are what I asked for a lot of time ago! :D

Me is happy. Me will buy!

In the UK 'bender' is a slang term for a gay bloke.

This game is going to be percieved quite differently here, I think.

What up Drake? Totally agreed on all points. Colby did an outstanding job on the reboot. For a small company he does things *right*. I couldn't be more happy for him and am admire his products.