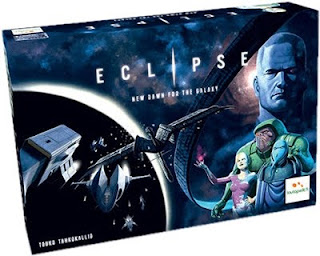 It seems that these days, so many games are half-hour throwaways that try to simulate a serious game with light rules and quick play. Games like that can be fun, but too often, they remind me of eating a tofu burger (my wife is a vegetarian, so yes, I have eaten a tofu burger. I would rather eat my sock). They're like imitations of serious games, like getting a patty made out of soy beans when what you really want is a half pound of ground cow.

Eclipse, on the other hand, is a giant double-meat-double-cheese with bacon, lettuce, tomato and sauteed onions on a kaiser roll with a side of steak fries. And maybe a milkshake. When you finish this game, you'll know you just played a real game, a game that separates the men from the fans of farming games, a game with so much meat on it, your colon will whimper for mercy. It's not a game for people who can't commit to a three-hour game, and it's not for people who just want to fly around and blow stuff up. It's a man's game. Or a woman's game. Whatever, it's not for the kids.

Of course, games where you build civilizations tend to be a little on the heavy side. A game like Eclipse that lets you research technology, explore space, build starships, battle ancient aliens and discover hidden artifacts is not going to fit into half an hour, not if you want it to feel like you did anything interesting. You need to prepare for a game this heavy, and be ready to stay a while.

You can tell Eclipse is a beefy game as soon as you open the box. The rules, for starters, are damned sturdy and downright intimidating. There are dozens of sheets to punch, plus multiple bags of wooden pieces and plastic spaceships and a ludicrous number of dice. And everything has a matte varnish, and the player aids are the size of place mats, and the art is engaging and useful at the same time. Just the stuff in the box will blow your mind.

And when you start building your galactic empire through conquest, exploration and scientific progress, you'll start to figure out just how much weight you can handle. You'll need to plan for the future while you maneuver for the present. You can't just start sending out the troops and letting the chips fall where they may. Build a ship this turn that you won't be able to use until next turn. Research technology that won't even come into play until your civilization reaches the point where you can use it. Order a slice of apple pie even though you won't be eating it until you can finish your milkshake.

So many things make Eclipse not only a seriously heavy game, but also a game that I would consider nearly perfect. Actions are taken by going around the table and just doing what you want - but every time you do something, you'll have to pay for it. Do more stuff than you can afford, and you might just bankrupt your entire space-faring empire, and become little more than a footnote in the annals of space history. Sure, it would be great to build a few ships, research some fusion drives, and send them off to war, all in one turn, but if you do, you're probably setting yourself up for financial ruin, followed shortly thereafter by having to take a job cleaning toilets. And if everyone else has been eating those giant hamburgers, that's not going to be a pleasant task.

Space combat is a riot. It's very dependent on good die-rolling, but there are ways to mitigate the luck factor and balance the odds. Upgrade your computers, for instance, or buy better guns. Build some cannon-fodder ships, or give your ships really strong hulls so they can take a hit. Then soar into battle against the forces of evil (or good. Depends on your angle, I guess).

But while there is copious opportunity to do violence and rack up a body count, there is so much more to do in Eclipse besides get into fights. Exploration and colonization is key to your future, and studying advances in economic theory could be just as valuable as equipping a dreadnought with mass drivers. You can't think in one dimension if you want to succeed, or you'll wind up trying to carve your empire out of the backwaters of the universe, while the smart player is gobbling up planetary systems like curly fries.

Going into all the brilliant rules in Eclipse could take all day, and you would be bored as hell before I finished. But it's fair to say that this game was tested a heck of a lot, and if you really want to see everything it has to offer, you're going to have to play it half a dozen times - or more. You can try out new alien races just to kick the tires. You can focus on colonization over exploration, bloody warfare over peaceful expansion, or mix up your play style and be the alien aggressors you were born to be.

Eclipse is about as perfect as a game could be, though that doesn't mean that everyone will love it. Not everyone is tough enough to eat that half-pound of giant hamburger. You might be a tofu guy. Don't be sad. Some people just don't have the appetite to handle this much game. But if you've got the stamina to survive a game this refined, deep and diabolically clever, then you're in for a treat. A really big treat that will harden your arteries and clog your pores, but a treat nonetheless.

Pros:
Heavy, both literally and figuratively
Incredibly deep, with lots of long-term decisions and short-term tactics
Beautiful, and full of fantastic components
Just a big, delicious, satisfying meal of a game

Cons:
Don't bother if you're not ready to invest some time

Eclipse is one of those Essen releases that won't be stateside for a while. Keep an eye out, and if you find a good place to preorder it, get your order in early, unless you don't have the stomach for this much game.
Posted by Matt Drake at 2:14 PM

It's a civilization-in-space game, so there are lots of contemporaries. Twilight Imperium is one, though I haven't played that. Civilization, obviously, though that one is a beating to play. Through the Ages, which is convoluted and painful compared to Eclipse (although it is fun, Through the Ages takes eight hours to complete and will leave you feeling like you just crawled out of an industrial washing machine).

Of all the civilization-building games I've played, Eclipse is, so far, my favorite. It is so well-designed that you can conduct galaxy-sweeping actions and still finish before dawn. It has a huge feel, and really is a whole hell of a lot of game, but it's clean and smart. You won't get hung up on minutiae or feel like you're a micro-manager in a cube farm. You're just building a society from the ground up, and blowing mushroom-cloud holes in aliens and all comers.

What is the real playing time for a 4-players game? If 30 min per player, 2 hours seems quite short

I am so glad you reviewed this - I've been following this game for almost a year. I know the Geek is a dirty word around here, but the designers posted excellent discussions there of how the game came into being. Now that the game has passed the Drake test I will be buying it - and I'll make sure to tell whoever asks that you were the reason why. Your reviews continue to be top notch!

Thanks for this, Matt. I really love the genre, and while I love TI (Twilight Imperium 2 is WAY better than TI3 for the reason you noted some games suck: micromanaging) I like Ascending Empires because it's like a TI civ builder, but can play in an hour and a half, plus it's got flicking discs, Catacombs style.

Thanks so much for this!
~Pete

Our 3-player game took us about 3 hours. It was a learning game, and we weren't entirely confident with the rules and what we should be doing, but I don't see being able to finish a 4-player game in two hours. But then, I'm never entirely confident in the times publishers put on the box. It seems to me like that's how long it takes the designers to play, after they've played it 100 times.

I have Starcraft and TI:3. It seems absurd tho own all three, but that argument doesn't stop my wife from buying a new pair of shoes.
Nagajur

I agree, Eclipse is an excellent game, one of the best I have ever played. The rules might look intimidating, but based on only one play they actually seem rather straightforward and very well thought out.

I don't think this is a particularly heavy or difficult game either. It is very well tested, you would think many people enjoy it. And, by the way l, I prefer tofu to ground cow, so there goes your theory on correlation between vegetarianism and enjoying games :D

Eclipse is definitely an epic, satisfying game experience. But you've made it sound like the most complex game imaginable. It's actually not that bad! There are certainly games that take longer to learn (e.g., Battlestar Galactica) or that are much harder to play well on your first time (e.g., Age of Empires). It also takes "only" 2-3 hours.

I just bought this beast of a boardgame, once again based in no small part of your review here.

I thank you, my wife does not.

You must have been hungry writing this review! Too should try haloumi cheese as an alternative to tofu. Maybe the progress would have that.