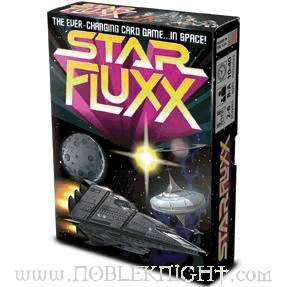 At least this year, we won't have to worry about what the new Fluxx is called. It's already called Star Fluxx, and riffs off so many science fiction tropes you may not even recognize all of them. Like you can win the Landing Party goal if you have the captain, the scientist, and an expendable crewman. In case you're wondering, yes, the expendable crewman is wearing a red shirt. No, the captain is not pictured with a hot alien chick. Or Khan.

One thing that's really cool about Star Fluxx is that most of the Keepers have special abilities. In other versions, the Keepers mostly just sit there and draw attention, which gives players a really good reason not to play them until the last minute. However, in Star Fluxx, the captain can recruit crew members from other players, the brain parasite can attach itself to the captain, and the laser sword can chop the captain in half and rid you of that pesky space monster. For the first time that I can remember, nearly any Keeper card is good for something, so you'll probably want to throw down as many as you can.

The surprises in Star Fluxx are also fun. You can counter other players, change goals before other people win, and otherwise screw with your friends. My favorite card is called It's A Trap. I don't even care what it does (though it is pretty fun). Mostly I just like to channel Admiral Ackbar when I play it, and yell 'It's a trap!' while sounding like someone cut off my lips.

Star Fluxx is not my favorite Fluxx so far. That would be Martian Fluxx, which does a great job of making you feel like you're playing a bunch of alien invaders harvesting Earthlings. But Star Fluxx pulls a close second, because on top of having a bunch of recognizable sci-fi gags that make me feel cool because I get the joke, it feels the most like you might have some impact on the end result, rather than just playing cards at random and hoping you don't lose before you get another turn.

Fluxx is still about the most random game you can play, although I think Star Fluxx does the best job so far of letting you feel like you have any ability to influence the outcome. I don't play Fluxx very often, simply because it is so random, but Star Fluxx might actually get played more often now that I know it's actually got some smart plays to be played. The new art is a hoot, too, so there's that.

At least for this year, we don't have to worry about what to call the latest Fluxx. But I think pretty soon, we will need to put our heads together and come up with the next Fluxx. I think it's important that we start on this idea very soon. For now, try Star Fluxx and see if you're inspired.

Pros:
Great art
Lots of special powers let you feel like you can actually set up card combos
More potential decision-making than any previous version (which is not saying much)
Cute sci-fi references
Better than any other Fluxx except Martian Fluxx

Cons:
Still wildly random and chaotic
Could end in two minutes; could take an hour and a half

If you want a cheap, portable, fun game that you can take anywhere and play with nearly anyone, Star Fluxx is a great choice. Want to save a few bucks on it? Try Noble Knight Games:
LUKE I AM YOUR FATHER
Posted by Matt Drake at 2:14 PM