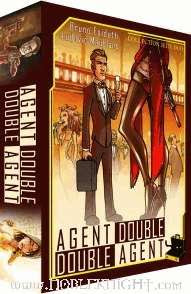 Different people like different kinds of games. That's not exactly breaking news. No need to stay tuned for live updates at ten. But I have seen very few games that fostered split opinions like Double Agent.

Double Agent is not a board game, and although it is played with cards, it's not really a card game. It's more like a mind game, where your goal is to get inside your opponent's head and sucker him into a bad play. There are six secret agents on the board, and you'll hand over files to these agents until they have enough that they have to give them to someone. The trick is, you never know which side that agent is actually working for. Every one of those sneaky sons of bitches is working both sides, and until their loyalty is actually called into question, they could hand over your favorite documents to the other player.

Playing the game isn't hard, and requires only a modicum of explanation. You'll assign loyalty scores to agents, then give agents secret files. If you think a particular agent is going to sell you out, hand him the dry cleaning bill and tell him it's a troop deployment agenda. If you think that agent is on your side, tell him where you keep the nukes. But the only way to know how loyal a spy is to the other side is to guess based on where the other player puts down his best cards, and since you both have plenty of ways to confuse and obfuscate, that can be tricky. Add in the fact that you both have cards that can screw up the way the cards are working, by doing stuff like swapping loyalty scores or checking the documents in an agent's briefcase, and you've got some mind-screw mayhem.

So that's how you play the game, but it's not really how you play the game. You play this game by getting into your opponent's head and screwing around. You read his mind. You fake him out. You set traps to make him think he's winning, and then throw down a sudden reversal that leaves him reeling. It's tricky and subtle, and if you're not naturally tricky and subtle, it's freaking hard. Prepare for an ass-kicking.

And here's where the great divide happens. There are people who will play this game and say, 'why would anyone even create a game like this?' Not because they didn't understand it, but because they just plain really didn't like it. Some people don't want to play head games when they're playing board games, and frankly, I don't blame 'em.

On the other hand, people who really like to burrow into their opponents' skulls like that nasty-ass worm thing from Wrath of Khan are going to love Double Agent. The feints and bluffs and surprise maneuvers can get a little intense, and result in some actual anxiety. Some people love that anxiety. Some people just don't see the point.

Me, I'm somewhere in the middle. I've discovered that I have a much higher tolerance for nearly any kind of game than just about anyone I know. I really like Agricola, and I really like Risk. I like card games and dice games. I've said before that I'll play anything if it's fun, and fortunately for me, I find lots of games fun.

But while I see a lovely amount of twisted strategy and deliberate mind-screw in Double Agent, that kind of game is not always my bag. When I play a game, I like to be able to tell my opponent the moves I see, so that he has the same information I do. For instance, here's me playing Risk:

"If you don't reinforce Alaska, I'm going to come through Kamchatka like the wrath of a dying god. If you invade Europe, you'll stop Blue from gathering his continent bonus. If you wrap up Peru, you'll score the bonus for that, and then you just have to reinforce Brazil to keep out Red. Purple has two territories left, so you could totally wipe her out and take her cards."

To which many players will reply,

"What am I, retarded? Shut up and let me play."

I've never been the kind of player who hides information so he can win. I don't see the value in a win if you had to leave the other player in the dark to make it happen. But if you're playing Double Agent and you say, 'hey, I just gave that guy a 4, so it's likely that he's got a high loyalty to me,' you might as well just concede.

So like I said, Double Agent is going to seriously split the masses. I think it is a very smart game, and if you play it with the right person, you'll love it. Play it with the wrong person, and you may not even see that it's a very smart game. Saying that a game is not for everybody is so obvious that it's idiotic, but this is still a great example of what that is supposed to mean. Many people will hate Double Agent. Lots more will absolutely fall in love with it. And people who like to play almost anything will be happy as long as they're playing something fun.

Cons:
Might leave you wondering why you didn't just skip the game and put your finger in a blender

Noble Knight Games is carrying Double Agent. If you're into games that rely more on your ability to mess with your opponent's head than your intelligent distribution of armies, you might really dig it.
GET OUT OF MY HEAD
Posted by Matt Drake at 4:50 PM