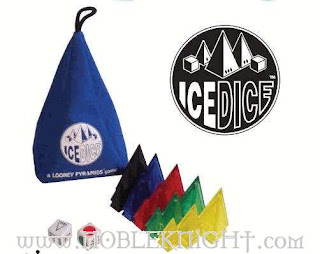 It's been almost two years since I first reviewed Treehouse from Looney Labs (you can read about it here), so it was about time to score another set of brightly colored translucent triangles and play more wacky abstract games. Well, maybe it was past time. It's hard to say, because I can't figure out how to set the clock on my cell phone (I have a new kick-ass Android phone, that keeps track of my budget and plays games and reminds me to take out the garbage, but I still can't reliably make phone calls).

The new Treehouse game is called Ice Dice, and it's got so much going for it, Looney Labs should be charging a lot more. Seriously, when you get this much awesome crap for twenty bucks, you should check to see if your Delorean has accidentally been set to 1986.

The new Ice Dice set has two full pyramid sets, all in technicolor shiny plastic. That's actually ten pyramids, total, each composed of three nesting pyramids. That's less than a dollar per piece. Plus you get two wacky dice (which I suppose is where they got the name) and rules for two games, with summaries for lots more.

But it's more than that, too. With just the pieces you get in Ice Dice, you can play a half dozen different games. You can add in one or two more boxes of pyramids (they're cheap, too) and play a whole hell of a lot more. If you need rules for some new games, Looney Labs has a baker's dozen on their website - and those are all free. Seriously, this is a great bargain.

But the coolest thing about Ice Dice, my favorite part of the whole package, actually is the package. Ice Dice comes in a pyramid-shaped zipper bag that will store all the pyramids you'll ever need, and keeps them all in a handy, instantly identifiable bag that you can shove in a coat pocket and take anywhere you go. If you ever like to travel and have games that go with you, Ice Dice should be at the tippy-top of your pyramid-shaped list.

There are two games inside the bag - Ice Dice (duh) and Launchpad 23. The title game is a clever little push-your-luck game for two players, and you can add more players if you have more pyramids. If you're just itching to play with four players, Launchpad 23 is a cutthroat maneuvering game where you'll routinely frustrate and counter your friends, if you can decide who to pick on. Both are fun, easy, abstract games that will entertain for fifteen minutes while you wait for the waitress at Denny's to bring your Moons Over My Hammy at a Barstow truck stop.

Of course, there are really more than two games in the bag. There are at least a dozen - all you need is the rules. And like I said, those are freely available at the Looney Labs site. My new phone will download those rules anywhere I go, and let me read them in the front seat of the car (though after I finish, it will probably butt-dial my boss who thinks I'm out sick, so he can listen to me sing along to Van Halen on the radio).

There are lots of games out there. Thousands, really. And of those thousands, hundreds of them will travel really well. But for my money, the best investment the traveling gamer can make is a couple sets of pyramids and some wacky dice that can be chucked into the glove box and dragged out when we get to the giant ball of twine, so me and the kids will have something to do while my wife takes pictures for her scrapbook.

If she does takes pictures, she's probably using my new phone. If I could figure out how to see the pictures, I would show them to you.

Cons:
Once you get started, you'll want more, so they're a little like heroin

Did I say Ice Dice was twenty bucks? I lied. If you got to Noble Knight Games, it's even cheaper than that.
CHEAP FUN ON THE GO

And if you need rules to more of the pyramid games, here's a good-sized pile to get you started:
http://beta.looneylabs.com/content/rules-guide
Posted by Matt Drake at 8:57 PM