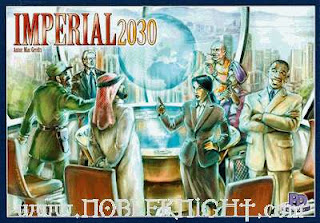 World conquest is one of those themes that just about anyone can understand. You just gather a bunch of troops, send them out to war, and grab anything that isn't nailed down. Kill all the men, rape the horses and ride off on the women. Or, you know, whatever it is that you do.

But in real life, taking over the world is way trickier. If you piss off enough people, sooner or later they all band together to deliver bloody kidney blows until you cry 'uncle' and have to cut Berlin in half. These days, if you want to take over the world, you have to get permission.

This kind of global warfare is what you're going to see if you play Imperial 2030. It's not just a bloodbath dice-fest where everyone competes to take down everyone else. You're not representing a particular color or nation. You get to be a big player, a behind-the-scenes puppetmaster driving the governments of the world to war for your own personal profit. So is everyone else at the table, so at least it's a level playing field.

You'll start off the game by giving Russia so much money that they make you the shadow government, while your buddy buys up India and the other guy who never washes the mustard out of his beard stakes his claim in China. The person with the most investment in a nation gets to decide what that nation does, and can hire troops, levy taxes, call for investors or just run out and start grabbing up land.

But here's the awesome part - other people can give money to your nation. It's not easy to manipulate, and sometimes you get the chance to invest into Brazil when they've been reduced to a third-world nation bordering on bankruptcy, but sometimes you get the chance to buy a huge chunk of China right as they're running roughshod over the populations of three different continents. You win the game by having the most money in the best countries, so even if you're not controlling the winning country, you can steal the win right out from under the guy who thinks he just should have won just because he spilled the most blood.

This is actually where the game starts losing fans. When I described the game to my son, he said, 'any game where 'tax Russia' is an option - I'm out.' Imperial 2030 has lots of war, violence and general mayhem, but it's not a game about war. It's a game about smart investing and clever manipulation. The guy who buys a lot of everything and barely manages to make India a second-stringer could win the game just because he has a big chunk of the nations that actually end up dominating the planet.

Another element that could dissuade the warmonger is that you don't get to fight every turn. There's a big wheel that you travel around, and it makes sure you don't do the same thing every turn. If you build a factory one turn, that's all you do, and then next turn, you won't really have the option to do it again. Launch your warships and go to war, and next turn, you'll be taxing the nations you control instead of following up with a brutal blitzkrieg. This can leave the militant bloodletters in your group a little aggravated, though the serious thinkers are going to love it. Time your warfare to disrupt enemy plans when they can't strike back, or delay the investment phase until it's most advantageous to you. Since Imperial 2030 is all about manipulating markets, and really not about imperialism or world dominance, those players who want to pile corpses like recycled newspaper are going to get restless.

There's one final problem that might send your mayhem-prone merchants of war running for the door - a complete lack of dice. Battles take about two seconds, because when you roll up on your foes, you'll each lose the exact same number of troops. The winner is always going to be the guy who brought more. There are no cards, either. There is essentially no random factor in the entire game. You win or lose based entirely on how you play.

Now, I am a huge fan of spilling the blood of wooden soldiers, but I also love to play games that are massive, protracted battles of wits. Imperial 2030 takes two or three hours (or more), and when you're done, you'll need a nap. It's exhausting to play a game this involved. Every decision has to be carefully considered. You have to watch every other move that anyone makes, because you can't afford to have your plans disrupted by a single Indian cargo tanker steaming through the South Atlantic. The values of nations will rise and fall, treaties will be formed, and your long-term plans will be put to the test. This is not a game you should play if you're short on time or just want to get drunk and throw some dice (there are plenty of other games that are great for that. My favorite is called Get Drunk And Throw Some Dice. It's even better if you can call it Get Drunk And Throw Dollar Bills at Strippers, but my wife doesn't really like that one as much).

The thing is, every element of Imperial 2030 that one person would see as a shortcoming, I see as another reason to love the game. I love the fact that you're playing a world war game that's not about world war. I love the strategy that goes into timing your turns. I love making a smart short-term sacrifice for a powerful long-term benefit. Everything that would make a more visceral player angry and bored makes my brain crank up and get all excited. Imperial 2030 is heavy on the thinking, and can last all afternoon, but that makes it awesome for me. You, on the other hand - I can't make any promises.

Noble Knight Games is carrying Imperial 2030, and holy crap, their price on it is amazing. You can save a whopping 30% off retail. That's a steep discount, kids, and if you like your games with some meat on 'em, you should jump on this one before it's gone.
WORLD CONQUEST WITH MEAT
Posted by Matt Drake at 2:48 PM

This is one of my favorite games. I dit as if it was risk an got crushed. Fun, fun.

My group and I play the original Imperial and we love it to bits. It's a simple game, not a ton of rules but it's strategy is really complex.

I like the theme of the original better, but 2030 has streamlined some of the rules so it plays better.

My favorite game!
Just love the part where you take control over another players country right before it gets its turn and then use his own big-ass army to make him/her weep and turn his investments to shiaaat! :-)