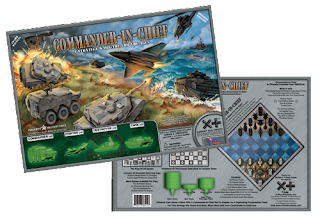 Publishing a game in a market glutted with games takes a certain amount of hubris. I mean, you have to hang on to the belief that what you're developing really is as good as your mom told you it was, and ignore the guy who asked you why in the world you thought this was a good idea. But there's a point at which you really ought to question the visions you had where Jesus came down and told you to self-publish.

Commander-in-Chief is a self-published game that takes itself far, far too seriously. The creator of this game must really think he's a gaming messiah, because you when you make a simple chess variant and decree that it is not only the third classic game ever made, but the final chess variant that will ever be created, you've gone from 'cocky' to 'cuckoo for Cocoa Puffs.'

Commander-in-Chief isn't a bad game, really. It's a military-themed twist on chess using amphibious landers instead of pawns and helicopters in place of knights. For a real twist, you play it diagonally. And it comes with a box full of seriously chunky plastic vehicles that must have cost a mint to make, especially since I would wager the game's creator now has a garage full of games he can't sell. I'm sure if he holds onto them, they'll be worth a mint when everyone realizes that they've missed out on the last chess variant that anyone will ever create (that is, until a bored tenth-grader makes a chess twist using seeds he extracts from his marijuana).

There are some mildly interesting alterations to chess in Commander-in-Chief, like the fact that the middle of the chess board is water, and so your tanks can't go in there. Airplanes can go anywhere, but boats can't leave the sea. You'll play a dumbed-up version of chess where the board is turned on its corner and you have to make sure you don't lose all your submarines before you take out that last fighter plane. How plastic airplanes make a game the culminating pinnacle of chess variants is beyond my grasp, but I'm sure the creator has a handle on it.

The problem is not that Commander-in-Chief is a bad game. The problem is that if I want to play a game that's a lot like chess, I'll play chess. What I will not do is spin the board a little and turn all my guys into plastic tanks. Chess is a classic that I've played thousands of times. Commander-in-Chief is not a game I want to play twice, especially when I could, instead, play chess. I guess I'm old-school. The now-and-future king of chess games is too modern for my old-fashioned self.

But all is not lost! If you want to play regular chess, you can use the pieces in the box to play chess. You just have to remember whether the amphibian is a rook or a knight, and what the hell do you do with the submarine? I have an even better idea - I'll use chess pieces. And I won't pay forty bucks for them, unless they're the kinds of chess pieces that rich people leave out on glass coffee tables to let other people see that they know how to play chess.

I can't imagine what it must be like to invent a chess variant and decide that it's so good that nobody will ever make another game better than yours. I am at once awed at the brazen ballsack it takes to make such a claim, and dismayed at the complete departure from reality required to actually write that on the box. Commander-in-Chief is not a classic in any way that matters, and will be promptly forgotten by nearly everyone, except the creator's wife, who will be questioning his judgment in taking out a second mortgage just to fill the garage with boxes full of plastic war toys.

2 players (or 4, because there are team rules. Yes, really)

You're probably wondering, 'hey, where can I get a copy of a game that's almost just like playing chess?' Well, you're in luck. I know just the place.
http://www.thechessstore.com/
Posted by Matt Drake at 8:35 PM

I just burst my gut laughing when I imagined what this game's creator would do when he read your review.

I think the real cool part about this game is that you can get the bits pretty cheap for use in a real game...

I found your attempted review of this product to utterly fail at every level to provide any kind of useful information or knowledge that would help the game community at large make any kind of fair decision about this game.

It appears your only intent is to simply and cruelly make fun of the designer for making one overly bold marketing statement that you take major issue with.

Dismissing the game as simply a chess variant in more or less one sentence while spending almost all of the rest of your review space attacking a person you've never met just tells me you lost sight of what you are supposed to be doing. Which is to be adding to the general knowledge about products out there.

This game, of which I own a copy of and have played and am familiar with does not try to disguise the fact that it is a chess variant. No crime in being a chess variant, there are many others out there. What would be more interesting is whether you thought it was a good and interesting chess variant or not and for what reasons. Personally, I like it and I like chess as well.

As a reviewer, you disqualify yourself by simply dismissing the game without any real analysis and admitting that you personally don't like chess variants.

I learned nothing about the game from your comments pro or con. I learned a lot about you (none of which would make me want to like you so far).

I do understand that one of your gimmicks is supposedly being crass and comical...okay...but I believe if you are going to claim to also be a legitimate reviewer, your reviews ought to include a bit more information about the game and game play as you do so and not just be a place for you to rant about a person's ballsack.

The worst thing though, is that you've wasted my time twice. Once for reading your, in this case, worthless and unsubstantiated trash talk, and twice by irking me enough to comment about your worthless comments.

"I just burst my gut laughing when I imagined what this game's creator would do when he read your review."

And now we know. Thanks, JD.

Any luck clearing all those boxes out of your garage?