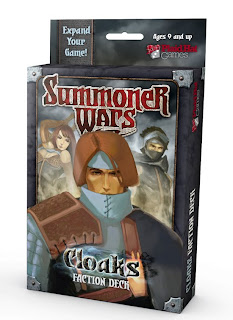 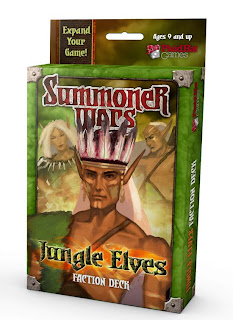 I usually like to have something worth saying before I start typing up one of these reviews. Like, I want to tell you reasons you will enjoy the thing I'm reviewing, or reasons I hated it, or ways that it is better than some other thing. Optimally, what I say in a review will have some bearing on your decision to buy (or not) the thing I review. You know, in a perfect world.

So I find myself a little non-plussed at tonight's review. The thing about Summoner Wars is that if you already know you like it, you're going to get the expansions. And if you're not sure if you'll like it, you'll start with the base game and work up. And if you know you don't like it, then there's absolutely no reason on Earth that you're going to go buy two expansions to a game that you don't even like, and have probably already traded for a copy of some dreadfully boring game about sorting colorful blocks or campaigning for a dogcatching job in medieval Venice. Because if you don't like Summoner Wars, you're probably a big fan of games where nobody dies. Or rolls dice.

I could tell you about the cool new cards you'll find in the Jungle Elves expansion pack. I could tell you how freaking cool it is that they've got freaking LIONS. I could tell you how all the event cards are chants that do something wicked, like make you run faster or hit harder or heal up. I could describe how the elf units in this box can charge across the field like their asses were on fire and their balls were catching, steamrolling the opposition into a mushy paste fit only for consumption by toothless swine. But telling you how incredibly cool the Jungle Elves are isn't going to help make up your mind to buy them, because you already know if you want them.

There's also all kinds of stuff I could say about the Cloaks. I could talk about how they're all about denying your opponent the chance to use his resources, with event cards and unit abilities that discard cards right out of his hand or steal his magic or just make him sit around with his thumb in his ass (depending on who you play, you may not need a card for that last one). I could tell you about these wicked but subtle unit abilities that let you play a thoroughly defensive game and still ruin your opponent's chances to attack, because you keep smoke-testing his lion riders without having to roll any dice. I could tell you how your guys are kind of weak, but they don't have to be strong because your opponent is going to spend most of the game trying to figure out how to afford one or two cards, and then you're going to steal those cards and throw them in your own magic pile, and then he's going to punch you in the teeth. Which is awesome, except for the punching. But again, just because I tell you how much fun it is to play the Cloaks does not mean you're any closer to knowing if you want them.

I could simply throw my hands in the air, give up all pretense of intelligent discourse or useful information, and just tell jokes about body parts. After all, I've kind of built this site around crude humor and suggestive innuendo. In fact, that might be the best course of action in this case, because telling you about the new Summoner Wars expansion decks is unlikely to produce any fruitful knowledge. So here's a quick crude joke.

A guy takes a small monkey into a bar. The little critter eats all the olives, then he eats a bunch of ice cubes, then he runs over and eats the cue ball off the pool table. The bartender is pissed, so the guy explains, 'yeah, he eats everything in sight. Little bastard. I'll pay for the damage.'

A week later he's back in the bar, and there's that damned monkey. The monkey runs over to the bar, grabs a maraschino cherry and shoves it in his ass. Then he pops it out and eats it. The bartender is disgusted and yells at the guy. The guy says, 'yeah, he still eats stuff, but ever since he ate the cue ball, he measures everything first.'

You're still no closer to knowing whether or not you want the Summoner Wars expansions, but at least now you might be laughing. You might not, either - it's not like I wrote that joke myself. I just think it's funny.

Pros:
Jungle Elves are great at rushing the enemy with brutal attacks, and keeping your opponent on his heels
Cloaks will make your opponent weep in frustration as you routinely steal all his crap and use it against him
Both decks are awesome. You should get them.

You should go get the Cloaks and the Jungle Elves. You should do that right now.
http://www.plaidhatgames.com/store.html
Posted by Matt Drake at 2:51 PM

David, I've played the cloaks a few times and, yes, they do make you adjust a little from how you might normally play your faction. However, the adjustments are certainly manageable. The card stealing ability is a good example. I played one opponent who totally built magic down to a one card hand and promptly lost his champion to the Cloak card steal. I played another that never let his hand get below two cards to specifically avoid or minimize that threat.

The Cloaks are not over powered by any means and don’t nerf any factions; they simply make the opposing faction play slightly different than they might usually play.

Both these decks are solid. I can’t wait for the June Master Set!

Dude I was having a really crappy day and that joke made it all better. Thanks man.

Gosh, there is really much useful information above!
make money online | apartments for rent in Winnipeg | play chess