General Video Game Rant - Video Games Are All Grown Up 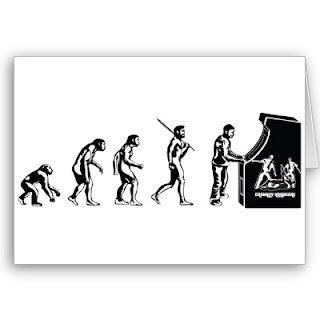 Video games are just about as old as I am. I was just young whelp when pinball halls started to feature stand-up arcade games, and we were the first family on our block to own an Atari (probably because the other families on our block were retirees). I’ve watched video games grow up with me, from the Nintendo Entertainment System and the original Playstation to the Xbox 360 and the rise of online video games. And one thing I’ve noticed is that where old games were considered cutting edge if a disembodied voice could say, ‘Warrior needs food… badly’, now the various characters in a game can all cuss violently in accents that betray their origins, and their mouths move along with the words.

In fact, I can remember when lots of blood was cutting edge. When we used to stand up with light guns in a noisy arcade and blast zombie brains all over each other before we wandered off to finish our pizza and play another round of miniature golf, that level of bloodshed was shocking. Compared to games now, where your game is for children if heads don’t explode and limbs don’t fly off on their own when you fire a plasma rifle into an enemy’s face, those games were incredibly tame.

To a certain degree, I miss that age of innocence. You could nuke cities from space, destroy aliens by the truckload, and repeatedly kick a man in the face and still never have any idea what blood actually looked like (until I mentioned at school that I had spent my lunch money on Pac Man, after which point the miners’ kids gave me the opportunity to see a little of my own blood). My dad was a preacher, so we tended to be horrified by harsh language – and now random characters in video games use profanity that would make sailors blush.

And lest we glaze over the third point in the adult triangle of sins, our games have sex in them now. I played a game last summer that had the hero walking in on a couple doing the horizontal hula, complete with swinging boobs and flashing nipples. Growing up, a game was racy if the female characters had low-cut blouses.

For some people, this is horrifying. It’s a symbol of the continued degeneration of society. But for people who actually know a little history, it’s humanity being human. Look at the pulps of the 20s and 30s – some of those stories had more sex than Ron Jeremy in a Nevada cathouse. There were twisted acts of violence that would sicken grown men used to CSI and reality television. Those stories were incredibly twisted – but every now and then, the adult elements allowed the writers to create some really great stories. Without some of those seedy bits, a lot of those stories would have been too tame to be interesting, assuming they could have been told at all.

Video games are just a form of entertainment, albeit one tied inextricably to the advance of technology. As technology continues to evolve at an ever more rapid pace, so does our entertainment. Where Nintendo was able to get away with some interesting game ideas, now big console games are simply too expensive to dabble in experiments. Old games could be made by a couple coders and an illustrator, and the illustrator was optional. Now the big releases require huge teams with wide arrays of talent. Just look at the credits on any video game you plug into your PS3, and you’ll see more names than a Hollywood blockbuster. Games have to appeal to a wide market, because otherwise they’re just too expensive to make in the first place.

But it’s not all bad. For one thing, this advance in technology and maturity has given video games the ability to tell better stories than ever before. It’s not happening as often as I might like, but as games evolve, so do the stories they tell. In fact, I can think of several games where the plots are more involved and interesting than lots of big movies. And where movies have to develop at a breakneck pace to keep audiences interested, video games can take 30 hours or more to get to a resolution, and so they’ve got tons of time for character development, sub-plots, and red herrings.

The addition of adult themes also allows games to explore more powerful thematic material. Red Dead Redemption, for instance, uses the format of the video game to explore ideas and concepts seldom found in all but the most high-brow novels or films, themes like the consequences of actions and the efforts of men to forge their own destinies. I am aghast that any adult would allow a teenager to play it, however, because these themes are far too mature. Where an adult can ponder the big questions posed by the game, kids are just going to want to blow stuff up and be outlaws. Never mind the sex, profanity or gruesome violence – kids shouldn’t play Red Dead Redemption because there’s no way they’ll be able to get it.

For those of us who mourn the lost days of innocence, where we destroyed hundreds of goblins and never once saw a drop of blood or heard a foul word, the cause is not lost. Just because the most mainstream outlets are largely ruled by games targeted at frat boys and would-be gangsters does not mean that nobody is making cool games. If you check out Armor Games or Ponged, you can find enormous catalogs of those simpler games that you can play right inside your web browser – and the good ones still have more content than you ever saw in the original Metal Gear. Innovation is alive and well in video games, even if it’s not at Microsoft. Just check out the awesome games you can download from Steam, or even the Xbox Live marketplace. As an added bonus, those games tend to be cheaper than a cup of coffee (assuming you like double mocha latte espresso half-caff with cinnamon, and can’t just drink a cup of joe like normal people).

In fact, the driving pace of technology is giving us more and more places to find interesting games. I haven’t scored an iPad yet – I still need to sell a little more plasma before I can afford mine – but games for phones and mobile devices are getting more and more interesting. A while back, I reviewed UniWar, which I still play on my Blackberry on a regular basis.

I can only assume that five years from now, I’ll be able to download an iPad game that includes all manner of lewd behavior and foul language, or be inundated with Flash games consisting entirely of naked butts and decapitations. But by the time those outlets are glutted with retreaded pap and gratuitously adult content, there will be some new place for the tiny developers to show off their brilliance and create fantastically original games.

So while I might miss those days spent in darkened arcades, wandering from machine to machine and playing games that were never more adult than Saturday morning cartoons (which I also miss, by the way), there’s no way you’ll catch me wishing things would go back to the way they were. Innovation and originality will find a way, and the more the market evolves, the more ways there are for me to find brave new worlds, meet exciting new people, and kill them before I bang their wives.

Quick note - if you want a greeting card with that picture at the top of the column, you can get it here:
HERE
Posted by Matt Drake at 6:18 PM