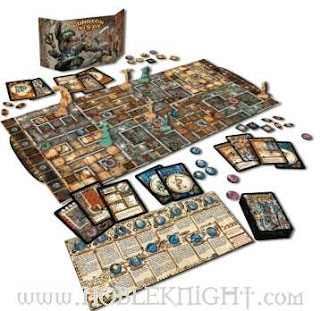 A guy asked me the other day if, having reviewed games for going on a decade or so, my taste in games had changed. I would not say it has - my favorite game is still an old-school dungeon crawl from the early 90s. But one thing has changed - I don't really like Dungeon Twister any more.

I reviewed Dungeon Twister more than three years ago, and back then, I thought it was a pretty cool game. Even now, as I write about how I really did not enjoy Dungeon Twister: Prison, I can remember having a lot of fun with the original. I had a few of the expansions, including the one that let me play with three players (it also lets you play with four, but unfortunately, that requires knowing three other people who like Dungeon Twister, and I only knew two). I liked all the cool abilities and neat stuff that came with the game, so I was actually quite surprised to find out how little I like it now.

It may be that I just don't like Dungeon Twister: Prison. That's kind of odd, though, especially when you consider how much I love games with tiny plastic people. Dungeon Twister: Prison is like the super-deluxe version of Dungeon Twister, with plastic miniatures, a huge tray to sort the minis from other expansions, and even a solo version of the game. It's completely compatible with all the previous iterations of the game, and gives you a place where you can store all those other parts so you're not lugging a steamer trunk full of boxes every time you want to play.

One thing that will put you off Prison is the way it tells you the rules. With the original game, it just lays out the rules, and then you play, and that's the end of it. But in Prison, the rules are parceled out to you in tutorial games. This would be fine, except that for the life of me, I cannot imagine playing a game this involved with someone who needs an entire game to just practice moving your guys. The game is pretty darn straight-forward. Why I needed to play five learning games before I actually used the rules is beyond me.

On the other hand, some of those tutorial missions are far more interesting than the actual game itself. They don't use all the figures, and they don't use all the boards. You're right up on top of the other guy from the beginning of the game, which means you're constantly trying to ration your cards to get the most bang for your buck, because the other dude is about to send a 600-pound colossus barreling down on you to cram his foot so far up your ass you can use it for a toothbrush. Some of those games were pretty interesting, and they were generally over in fifteen to twenty minutes.

But when we tried to play the full game, we were very bored. We actually ended the game early when I looked at my wife and said, 'I am not enjoying this at all,' and she said, 'neither am I', and I said, 'let's burn it.' We didn't burn it, because it's good trade fodder, but I can tell you right now I won't be playing that game again. In fact, I disliked Dungeon Twister: Prison so much that now I don't even want to play the original.

I think the difference between Prison and the original game is that the tiles in Prison have too many walls. I remember being able to chart crazy paths through the dungeon, dodging pit traps and smashing gates and making good time to the other side. But now I can't even get to the next tile without spending half my turns spinning the rooms, because the walls are actually completely blocking half the board. And once I spin the rooms and open up one area, the other side of the table is blocked off by walls. What used to be a tense game that would make my brain sweat turned into a frustrating exercise in wasted time.

It's sad, really, because this version of Dungeon Twister is dead sexy. The plastic miniatures are great, and the option to play solo is a very cool addition. The tray is great, the art is gorgeous, and there's nothing about this game that doesn't jump up and say, 'play me!' Well, until you play it. Then you won't want to play Dungeon Twister. You may just want to play Twister, which is a fun party game for naked college kids.

The funny thing is, if you're a big aficionado of Dungeon Twister, you really should pick up Prison. It's built to work perfectly with all your other expansions, and the storage tray alone is a thing of beauty. I wouldn't recommend using the new rooms, but the character abilities are crazy fun. The pieces are great, and if you just really wanted to play a game and don't have any friends, you can even try the solo version.

In fact, if you are a big fan of Dungeon Twister, and really want to pick up Prison, I'll trade you mine. I'm sure as hell not ever playing it again.

Pros:
Great pieces
You can consolidate all your other boxes into this one
The new character abilities are very cool

Cons:
Not as much fun as I remember

If you are a big Dungeon Twister fan, you should pick up Dungeon Twister: Prison, and maybe just not play with the boards that are inside. Noble Knight Games can hook you right up:
A VERY LONG LINK
Posted by Matt Drake at 2:39 PM

Wow, I'm SO glad to learn that I'm not alone.

I didn't play the original, but I've heard so much positive remarks about it and this game that I bought this game and went through nearly the same discovery as you:

Am disappointed in the sense that this game was practically begging to be loved and I so wanted to, but somehow it just went completely flat for me...

So yes, having company is good :)

Thanks for the money-saving review! :)

I've had DTP on my wish-list for years. Well, 'parked' since finding that although DTP 'looks' like a hell of a d-crawler, with all the nifty tiles & plastic bits, it's actually closer to an abstract like chess. So at that time I ended up with Descent+exps for the niche.

But the problem was, those old reviews still raved about DTP, and kept me wondering how it played over time, and the arrival of new games. So though I knew I didn't need an abstract d-crawler, it was popular and highly reviewed so maybe...

Anyway, as recently as a few days ago, I was once again considering tossing DTP into the cart to round out a purchase. Fortunately I again resisted the urge.

But with your handy review, and the arrival of games like Ravenloft & Ashardalon & the DQ reprint, I can now happily purge the DT family from the wishlist altogether!. :D

Give me your copy when I'm in town, Matt! I STILL love Dungeon Twister and I've wanted the upgrade package for a long while. I'm just hoping that, like you've experienced, it doesn't taint my love for the original.

Very worthwhile data, thank you for your article.