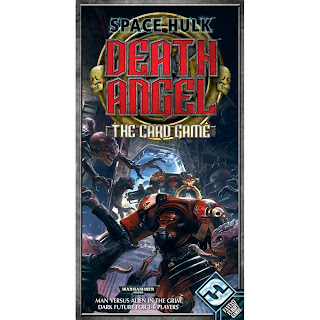 Space Hulk is one crazy fun game. The new one, with all the different sculpts and the embossed floor tiles, is both fun and stunning to gaze upon. I like the quality versus quantity aspect of the game, and it's fun to blast creepy aliens with space marines in power armor. So I was really surprised when I played Death Angel, the card game based on Space Hulk, and didn't like it at all.

The story is the same. You have a team of marines, and they go tromping through the corridors of a derelict chunk of spaceship hurtling toward civilization. Along the way, ugly purple monsters pop out of the ventilation and slice the marines like a key lime pie. Then the leftover marines fire hundreds of thousands of rounds of ammunition into the aliens, and then you clean up because Mom needs the table to make dinner. Good times.

In Death Angel, the entire trip through the genestealer killing fields is abstracted. A location card tells you what part of the ship you're in, and a couple of blip decks tell you how many more psychotic aliens are left there. Once the blip decks are empty (usually because the aliens have decided to join the party and dance with the marines at the world's most horrifying luau), you flip another location card, and now you're there.

Another abstraction replaces the part of the game where you decide to shoot the bad guys, because you've got all these teams of soldiers, and they can't ever do the same thing twice in a row. So you shoot with two teams while the other two wander around with their thumbs in their assholes, because they shot last time. Not to worry - those two guys will probably die, and then the other guys won't be able to shoot because they just did. This is only an upside because if you die early, you can stop playing.

In fact, every part of Space Hulk, from the dark corridors and special rooms to the terrifying brood lords and flamethrowing marines, is abstracted. You don't count off movement and range. You don't advance slowly and set your guys to overwatch. You don't spawn around the corner and rush the bad guys forward. The bad guys are just cards that sit there until they're summoned, and the good guys are always facing the wrong way because they can't turn around and shoot at the same time.

Combat is basically a matter of the marines playing action cards to try to kill the genestealers, and then the genestealers chomping on the marines until their stomachs are distended like your fat Uncle Frank after Thanksgiving. There's a die in there that tells you how likely you are to kill something (not very) and how likely that something is to kill you (extremely). Fighting tends to go something like this:

1) Choose two guys out of your half dozen survivors to shoot.
2) Roll the die for each of them.
3) Curse because you missed twice.
4) Roll for every bundle of genestealers attacking your marines.
5) Curse because they all hit and dragged your soldiers to an untimely death.
6) Flip the table.

I get that cooperative games are supposed to be tough. It's not fun if you can win every time. But you know what is even less fun than winning every time? Losing every time. Call me a candy-ass if you want (and if you do it from far enough away that I can't throw something heavy at you), but when I play a cooperative game, sometimes it's fun to win. I don't want a game to slaughter me without effort before I get through the first door.

To be perfectly fair, you can win Death Angel. I did it. I played four games (both with other people and solo), and won the last one. I was surprised, but then, my luck was unbelievable. I mean, it was almost unholy. And I still finished with just one guy who rolled like Jesus was his co-pilot and managed to wipe out six genestealers all by himself. And when I can only win the game because I'm just that lucky, it's too damned hard.

In fact, it reminded me of something completely different - a Euro game. If a German designer had set about making a complicated puzzle game and then added a die roll that tilted all the odds in favor of the bad guys, he might have wound up with Death Angel. Only because he was a German designer, it would have been about floating bathtub toys, and it would have been called Der Ruber Quakkies.

If I want to play a cooperative card game ruled by luck... well, never mind, I don't want to do that. If I want to play Space Hulk, on the other hand, I own it, and I'll just play that. It's more fun, and I have this cool soundtrack thing that I can play on a laptop to make sounds like gunfire and screaming genestealers. Whatever mood grabs me in the future, I can be reasonably certain I won't be wanting to play Death Angel again.

Cons:
Too damned hard
Overly abstracted
Loses everything awesome about Space Hulk
Not very much fun

I should point out that while I did not like Death Angel, I know lots of people who did. If you decide that you might like it, you can find a copy at Noble Knight Games:
GET DER RUBER QUAKKIES
Posted by Matt Drake at 2:46 PM

At last. Someone finally told the truth. This game has the capacity to cause blindness and even retardation upon playing.

I read shit like this...
http://www.gameshark.com/entertainment/features/776/Cracked-LCD-174-Death-Angel-The-Space-Hulk-Card-Game-Review-.htm
... and I wonder how the fuck anyone can not see this game as you and I do, Matt.

Seriously, God bless you for being one of the few guys that isn't completely full of shit.

A lot of people actually do like it. I'm not one of them, but I know people who are.

And Barnes has a long-standing rep for panning FFG games, so it's not completely inconceivable that he actually did like it.

But I most certainly did not.

I'm with bidder #1. I played it and I was completely underwhelmed with it.

Regarding the Barnes thing above, I just read the review (Ivery rarely read full reviews anymore) and I was a bit taken aback by the fact that he thought it felt like Space Hulk. I found the opposite to be true, but like you said, different strokes for different folks.

Anyhow, I'm with you, big man. The game was a total clusterfuck of luck. Unless, as you so eloquently put it, you had the King of Kings riding shotgun, I can't see how you could win this without playing it 20 times. Worse still, when you do finally win, that's it. No replay value, really.

Hi!
For once, I need to disagree with you, Matt. I really liked this game, and use it quite a lot as a travel "acccesoire". I'll grant you, Space Hulk the BG is a thousand times better, but this one is not that bad. My only gripe is the huge difference in quality of the teams. If I play a solo game using the purple/blue/yellow combination, I win ~70% of the time. Green/red with whatever other color, and I think I won once, and that's because JC and Buddha must have been on my side.
So, that's that. Either way, thanks for the review, it was really funny, nd thanks for the other reviews, where I fully agree with you :)

SOB. I went on a limb and ordered this game Wednesday. 'On a limb' because I didn't have a Drake's Flames review backing me up. It seemed to have everything in place; FFG production, GW theme, co-op, short(er) playing time, and inexpensive. I knew Corey designed it, and he can be a little overtop with complex rule sets - but hey; enough people on BBG thought it was good. And they had pictures of people playing it with their minis! So I went for it. I now, I'm kinda regretting it. I could have bought 'The King in Yellow' expansion instead.

Even if it only amounts to eye candy, is it asinine to play this game with minis?

I really like the game - i have played about 20 times a won about 7 times, which is ok. This time I disagree with Matt in most of the points.

It's a lot more fun as a cooperative game than a solo game. The cries of fear and despair are way more effective when someone else is listening.

Matt, I wonder if any card game could re-create the Space Hulk experience, as you describe it?