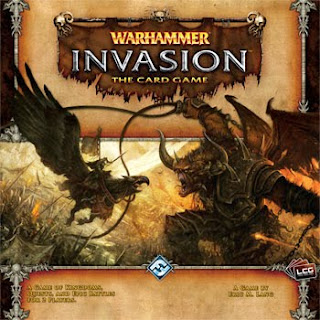 My wife is awesome. I'm going to tell you why.

First, she's a trooper. She's had chronic, near-debilitating back pain since an idiot doctor couldn't stop talking golf long enough to do her epidural properly and gave her permanent damage to her spine. She has fibromyalgia, which was misdiagnosed by her doctor, who then proceeded to overdose her on vicodin and predisone. The overdoses resulted in a weakened bone structure, so that her knees were so weakened that they gave out while she was walking and went sideways on her, resulting in weeks of physical therapy (and she still walks with a cane). And on top of that, she still works.

Second, she plays games with me. She wasn't a gamer at all until I married her, but she'll play just about anything. In fact, the other day, while she was on the way back from a doctor's appointment, she stopped in at a game store and bought me Warhammer Invasion. This wasn't a reward for remembering to take out the trash, or an anniversary present, or even a bribe. She just saw it and thought I might like it.

She was right. She often is. She is, like I said, awesome. Warhammer Invasion has everything I like about collectible card games, but since it's a living card game (that's Fantasy Flight's moniker, not mine), you don't actually have to spend five grand to complete your collection.

The starter set comes with four full, pre-made faction decks for orcs, chaos, empire and dwarfs. You have a capital board, and the object of the game is to send your troops over to the other guy's capital and light it on fire. I wouldn't recommend actually lighting it on fire, incidentally. Your homeowner's insurance might not cover intentional damage to your kitchen. They may claim you are too stupid to own a home, and just kick you out and make you live in a FEMA trailer.

Every deck has a very different play style, which is one thing I like in these kinds of games. The orcs are pretty straightforward - they crush things a lot. But the others require a little finesse to work properly. The empire is most skilled at moving around and getting resources where they need them, while the chaos guys are great at giving the good guys a bad case of Nurgle flu, so everyone is in bed when your wacky demonoids come riding down the hill to burn the barns and dry hump the farm animals. The dwarf units are Chuck Norris kinds of tough. You can also buy expansions that let you play good elves and bad elves, and both kinds of elves also have cool powers. The bad elves, for instance, are really, really mean.

Warhammer Invasion requires you to create a solid balance of strategies. Focus too much on boosting your income, and you'll leave yourself open to constant nut kicks. But if you spend all your energy on the offensive, slamming your opponent every chance you get, he's going to eventually build up past your ability to break through his defenses. Cards are allocated to lots of different places, and do lots of different things, but the basics of the game are easy to understand and play smooth right out of the box.

You can also do some killer deckbuilding, even with just the cards you get in the starter set. You can have the orcs ally with the chaos guys, and now your orcs will blow through your opponent's defenses like Refrigerator Perry blitzing a pee-wee football quarterback while the gold-armored tough guys are barfing into airline bags because your chaos demons gave them all bad tuna salad. You can make alliance decks with the good guys, too, but everybody knows the bad guys are more fun.

The best part (well, the best part for my wallet) is that while you can expand this game eight ways from Sunday, you don't have to quit your meth habit just to afford new cards. You can actually get every card ever made for the game, and you can get them for about $300. That seems like a lot of lettuce, until you consider how much you would pay to complete just one release of Magic cards. Then it's a hell of a steal.

So you've got cool Warhammer art (that should go without saying), great interacting card abilities, variable strategies and killer tactical plays. You can customize your deck for the kind of game you want to play, and you can finish the whole game in half an hour. You can expand the game without spending your kids' college fund, and you're not going to always lose to the guy who has more money to spend on cards. What's not to love?

Well, unfortunately, there is one thing. In every game we've played so far, there's a point where we both know who's going to win, even though there are still two or three turns left. When the high elves have been so beat down that they can't draw cards or pay for the ones they have, and their defenses are in tatters while the orcs just keep bringing out more green-skinned super soldiers, it's all over but the crying. We have not had a game be even remotely close, because all the really important stuff happens at the beginning. There's a kind of balancing escalation act, in which both players are trying to get richer while maintaining their defenses, and then at some point it kind of tips one way or the other, and then the final outcome of the game is a foregone conclusion. It's your classic runaway leader situation, except it's more like a runaway freight train full of unstable nitroglycerin and chemical waste with a NASA rocket strapped to the caboose.

I've already bought one expansion for Warhammer Invasion, and I'll be buying a lot more. We have had this game for less than a week, and already played six or seven games. My wife likes it, I like it, and we're trying to rope our kids into a big team game. This game has legs, and I know that we'll be playing it for a long time to come.

So to finish off this review, I'm going to run down a bunch of reasons my wife is awesome. One - she bought me Warhammer Invasion, just because she likes me. Two - she read the rules herself, and taught me how to play (that's usually my job). Three - she likes the game, and encourages me to go to the game store at the corner and buy expansions.

You can buy Warhammer Invasion, and then you can have as much fun as I'm having. Unfortunately for you, you can't have my wife.

Pros:
Great art
Intuitive rules
Easy game play
Tons of planning and strategy and smart plays
Great expandability
Lots of reasons to play it again
All the fun of a CCG, none of the crazy money sink

While I can't tell you where to get a wife as awesome as mine, I can definitely send you to Noble Knight Games to pick up Warhammer Invasion:
TONS OF FUN, CHEAP
Posted by Matt Drake at 5:04 PM

Sounds like a game to fill in for my Magic withdrawals. My wife also suffers from fibromyalgia but nowhere as bad as your wife.

Don't get too attached to your wife. Eventually, "they" will come to take her back because she is clearly not of this world.

Great review. I've enjoyed man games. The Orcs suck to play against until you really learn how to counter them. They still bring the beat-down. Personally I haven't had too many "run-away" games, and we've pulled out some surprisingly fun last minute victories. I think this has to do with having so many expansions mixed in....they really add a lot of variety and different strategies. Wait until you see the 10 point tactics cards in the Arcane Fire expansion....sheesh!!!

I love you, Drake.

Can I be a man, yet still love you like a woo-man?

Can she Train other wives? I did get mine to play warhammer, not a big fan but she will play thunderstone.

That's usually called sodomy, and it's really not my bag.

Ah, I have given myself a name. Henceforth, you will never receive analnimous love again.

At any rate, I only wanted to give you fanly love, not sodomy. I respect your exit only policy.

My only wish is that my GF (yes, gf) would enjoy WH: Inv as much as your wife would. Then I'd run out and buy the expansions. At the moment, she's mastered all the basics, but we still dont play it that often. The base set offers enough play for how much we bring it to the table :(

Sounds like one that my boyfriend and I can sink our teeth into while the Warhammer minis are all boxed up out in the garage pending a basement renovation.

Manly, I fully endorse fanly love. Not fanny love, but now that we've got that ironed out, that shouldn't be an issue.

Sharon, I think you guys will love it. It's got enough bite to have years of replay value, but it's easy enough to start playing that you won't have to invest a lot of time or money getting up to speed.

I still have to find a way to play it (with balance and fun) with more than two players... that's the worst problem of WH:I. Otherwise i like it a lot. I usually take the dwarfs which start really slow but then becomes very menacing and solid.

I agree completely with your review, Matt - thanks for sharing! I've played a handful of games with a buddy of mine who's a Warhammer nut, and by late game, it's pretty evident who will take it home. Nonetheless, a really fun game - unless you're playing against daemons. Ouch! :)

hello again, not sure if you read older posts comments. but I would like to ask you something. I played WI for a while and was wondering in what the game is different from other TCGs/CCGs I played. I know this game is a LCG but that should not have anything to do with it.

As I don't really know how to formulate my question I'll give you another one. Can you think of any other game similar to this in terms of the thinking process? (except AGOT) (actually with oine other player we agreed on chess being the closest game^_^)

I played many card games but this one does not really follow my thoughts' chain so I was trying to figure out why. not that it would be something bad. I enjoy the game and I find it good. it's just a little thing that bugs me and there aren't people I could discuss this with others.