Pieces of Paper Game - Escape from the Aliens in Outer Space 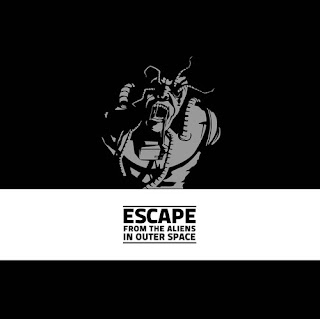 This week was punishment week for my group of gamers. I always feel a little bad for my friends when I bring bad games. They're good sports - they'll play anything once, even if it's horrible - but nobody likes having to play really crappy games.

Which brings me to the subject of this review: Escape from the Aliens in Outer Space. Yes, that is the full name of the game. No, it is not ironic. Yes, it is very stupid. No, it is not based on an Ed Wood movie.

Escape from the Aliens in Outer Space (I'm going to write out the whole name every time, to emphasize how ridiculous a name it is) is a game where half the players are aliens, and the other half are humans, and they're in Outer Space, and the humans have to escape. So at least the title has some truth in advertising.

The entire game is played out on pieces of paper. Each player will have a hex grid with tiny hexes, and they'll write where they're going at the top of the page. If they step on a gray hex, they draw a card. The cards will either make you tell everyone where you are, or tell everyone somewhere you're not, or not tell anyone anything. Since the cards are discarded without letting anyone see them, you can bluff everybody. But since there's no way for anyone to ever check what you're doing, you can pretty much just lie. You would suck if you did, but honestly, the person who made you play this game has it coming, anyway. You'll never know if your friends are cheating, because it's not like you're going to play Escape from the Aliens in Outer Space more than once.

You'll also never know if your friends are cheating because it's nearly impossible to keep track of where everyone else is going. Aliens move faster than humans, so that just makes them even tougher to track. The whole object of the game is to figure out where your opponents are headed and, if you're the bad guys, jump on them and eat them like sugary baked goods. If you're not the bad guys, you just want the bad guys to not eat you, which you manage by escaping through an escape hatch. This is where the 'Escape' part of the title originates, in case that was not already abundantly obvious. The imagination of the designers was not exactly stretched to its limit with this bit of wordsmithing brilliance.

As you play Escape from the Aliens in Outer Space, you may begin to wonder if it would be better with a different number of players. Like, if you play with just two and realize that it's a stupid game, you may wonder if it would be more fun with four. Or if you play with four, you may wonder if it would work with two. The fact is, it doesn't matter how many people are playing, because it doesn't work no matter how many people are subjecting themselves to the misery. You'll chart your progress, try to remember where your friends last said they were located, and attempt to puzzle out what made anyone ever think this was worth publishing. And you will figure out that the only thing that changes with more players is how many people are going to be pissed off that they played.

There are a few additional twists, but they essentially come down to items that the humans can use if they find them and escape hatches that may or may not be locked. These tweaks add almost nothing to the game, beyond being a couple more decks of cards with icons and no words. In fact, it's almost as if the designers didn't want anyone to know what the pictures were supposed to mean. If they had actually written descriptions on the cards, it would have been a lot easier to play, but I suppose then they would have needed a translator. The designers probably thought they would need access to the enormous international market, because of the colossal hit they knew they had created. They were so, so wrong - this game is ten pounds of ass in a five pound bag - but they didn't know that. They probably thought they were six months away from retiring in Bora Bora with their new private jets and hot trophy wives.

I do have to give credit to the art in Escape from the Aliens in Outer Space. It's a very minimalist style - mostly colorful half-images on a black backdrop - and it looks damned classy. Sure, a lot of the art is so bare bones that it's impossible to tell what it's supposed to be, but it looks great. If Andy Warhol created a board game, it would look like this. It would probably be about as much fun, too. The design makes the game more difficult to play, but it does a bang-up job of looking pretty, and at least you don't have to try to figure out why there are like fifty soup cans.

One last point remains to be made regarding Escape from the Aliens in Outer Space. If you like to get value for your gaming dollar, you should definitely not buy this game. You get a small deck of cards, a bunch of diagrams to plot your movement, and a handful of golf pencils. If you buy the limited edition, you also get a card with a picture and a signature, plus a few more of those diagrams. There's almost nothing in the box. If you paid twenty bucks for Escape from the Aliens in Outer Space, you might be a little miffed. But the regular version is more than thirty dollars, and the limited edition goes for fifty. If I fill a box with rubber chickens and fake vomit, it would be worth more than this game, and a lot more fun (assuming you have any sense of humor whatsoever).

The real travesty here is not that I made my group play Escape from the Aliens in Outer Space. The real travesty is that it wasn't the only crappy game we played this weekend - but for that, you'll have to wait until next time.

2-8 players who have absolutely nothing better to do

Cons:
Gaming value rip-off
You can't play without ruining the components
Cards just show symbols, and lots of them
Plodding and random
Planning, strategy and tactics are completely worthless
Irritating and pointless
Everything else not directly associated with the very tasteful design

I'm not giving you a link to a place you could buy Escape from the Aliens in Outer Space, because I care too much about you. It's the Christmas season. This is my gift to you.
Posted by Matt Drake at 2:50 PM

This was the #10 best game listed from Essen, as voted by the people attending (which got me interested in it). I have it and, while it doesn't sound like the most fun game ever, it looks more than entertaining enough for me. If you have the limited edition (white) version, I'll take it off your hands.

That is the craziest thing I have ever heard.

OK, not really, but it's damned crazy. This game was absolutely horrible. And this isn't a one-game review - I played it multiple times, with different size groups, and every time thought it was abysmal.

Thanks for the laugh Matt. That was hilarious.

This game is the same as Nuns on the Run with one minor exception, NotR is actually fun and well produced. Okay, that's two, but I bought this piece of crap and donated it to Matt. Now Matt has probably hired hitmen to come after me who specialize in castration. Crap! Why'd I buy this turkey of a game?

Latest episode of the Dice Tower has Tom raving about it. Ha!

Thanks Matt,
I was really thinking about this game but the few (and ugly and really cheap looking...) pictures at the BGG keep my away from purchasing till now.
But now, after your honest review I know "It's good to trust your stomage" before you purchase something your not convincend...
You saved my around 20 dollars, thanks and have a nice christmas.
Cheers,
Michael

I just finished playing my second game of it, and conception ally it sounded fascinating, but the execution of the game seemed to largely be unbalanced in favor of the humans.

Maybe the game could be a few bucks cheaper but that's it. Heck you don't even have to buy the game, they provide most of what you need online for free so anyone can try before they buy.

You didn't like the title, you didn't like what you found in the box... from there on I'll just assume that affected your opinion and set a poor tone for the game before you even started. I felt the same thing playing Munchkin, but this game has got something to it. Yup, not even a guy writing something such as this will compel me to want to play that game... ever. Then I went to Tom Vassel and his review exactly mirrored my own.

The only point which seemed to echo through your whole review is the fact no one can play the game because it is flawed, in that no one can tell if the other is cheating, so everyone gets upset as they are all pretty much clueless as to wtf is going on.

It's a game of logical deduction, people don't lie and ruin the game, and if that's even a questionable point in your review then you should of always had a GM who could referee the game.

There's so much fun to be had here, so much memory gaming and tactical bluff & double bluffs. The looks on peoples faces as they pretend that they are an alien when they read out a sector, you need a good poker face for this game. It's all blushes for the eager and unexperienced, as long as they know what they are doing (not lying that's it).

The most hysterical thing is lucking out on dangerous sectors in order to get the alien players to attack each other, total epic win!

If you think it's too easy for one side or the other, then you can make your own map within a couple of minutes and print em off, so they are tailored to be in favour of humans or the aliens.

This is a brilliant game that takes 2 minutes to learn and 2 months to master, then you can always add extra rulings to mix it up when everyone gets it.

All that being said, there will be gaming groups that hate this, and those who love it. If your group likes Scotland yard, letters from whitechapel and Garibaldi co-operative, logical deduction games... you may appreciate this.

Helpful Note: you can laminate your favourite maps and use white board marker pens to save from using your maps. You'd even be able to re-sell your game as new if you use the internet aids, being that this game isn't your thing.

Not much deduction to Scotland Yard. Any idiot can figure out the possible places the killer is, after that it's just guess work.