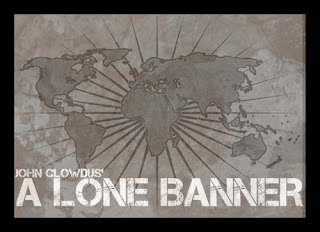 World peace is highly overrated. I know it's a lofty goal, and everyone thinks it would be great. Big philanthropists like Bill Gates and Bono think it would be awesome. They even write songs about it, like where they wish us all peace on Earth and goodwill towards men, or when a bunch of Europop assholes tell us that it never snows in Africa (apparently Kilimanjaro is covered in dried wildebeast dung that only looks like snow from a distance). But I think world peace would be boring.

Maybe I'm just greedy and narrow-minded, but if we had world peace, what would we make games about? I'll tell you one thing, all the games would be made in Germany and feature such exciting pastimes as ironing clothes and storing unwanted bean sprouts. Maybe I'm a Bond villain just for saying it, but when I play a game, I want a little unwarranted bloodshed.

Which is why I like A Lone Banner. In this quick, smart game from Small Box Games, you're trying to take over the world in a massive military rumble. You get to destroy your enemies, take over entire continents, and throw the unpopular kids in the dumpster. It's fun and violent and easy to play, all of which makes it a big winner for me.

The game consists essentially of a bunch of region cards and a pile of dice. Each player gets a set of dice in his own color, which will be his troops. You roll your dice to see how strong your troops will be this turn, then send them out to conquer the planet. Then other people send troops, and they try to beat your troops so they can claim the regions and send your guys home in a black plastic trash bag.

One thing that really works for A Lone Banner is the way turns work. You resolve any fights involving your troops at the beginning of the turn, and then send out troops at the end, so that you generally get an entire loop around the table before you actually find out if you're going to win. If you're the first to announce a claim for some foreign soil, you might find that everyone else fights you for it just because you're there. On the other hand, if you go after territories that nobody wants, there's a decent chance that you can take them without too much of a fight.

The first time I read through the rules, though, I hit a snag that caused me some concern. Depending on what you roll with your troop dice, you might be able to use some Special Abilities. I've played enough Small Box Games to know that Special Abilities are more likely to add confusion and headache than versatility and excitement. But when you see how easy these abilities work, they become an asset, not a liability. If you roll doubles, you can place a powerhouse of overwhelming troop force. Roll a straight, and you can topple a government from the inside, claiming land without even having to send in the marines. I'm pretty sure that's how we wound up with Arkansas.

There's an indecent amount of luck in A Lone Banner, and that's as it should be. You roll to see how strong your armies will be, then you roll again to see if they lose even though they're the meanest motor scooters in Central Australia. It's entirely possible for one player to wind up crippled by his dice, never able to gain more than two pieces of South America while another player just keeps rolling straights and grabbing all the land with CIA-funded internal upsets, until Ollie North comes along and starts shredding every document with Reagan's name on it, including his driver's license. Then Reagan forgets he ever knew how to drive.

So let's face it, world peace might be great for campfire sing-alongs and infant mortality rates, but it would make for boring games. A Lone Banner shows us just how much fun you can have if you're willing to stop pretending we're all peacenik hippies, and just blow something up. The game is easy to learn, quick to play, and happens fast enough that even if you get stomped one turn, it's only going to be a minute or two before you get another chance to run amok like Napoleon with a nuclear arsenal. This is war, and it's fun.

Pros:
Easy on the eyes
Simple rules with just enough depth to make it interesting
Light-speed game play, so you're never bored waiting for your turn
Fun, smart and bloody

Cons:
Lots of die-rolling (only bad if you hate games with luck)

A Lone Banner is a very fun game that you can learn in five minutes and play in half an hour. Run over to Small Box Games and get yourself a copy:
http://www.smallboxgames.com/alonebanner.html
Posted by Matt Drake at 2:27 PM

Just want to say that I am really enjoy reading your blog. Thanks for taking the time to play all these games and letting me know what's good.

No, man, thank you for reading. I do this because it's fun, but people send me games because you guys keep showing up to read about them.