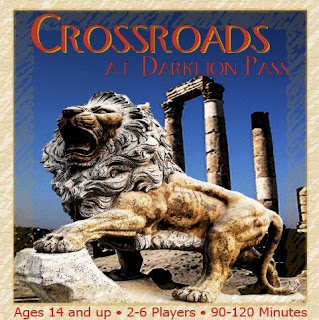 I've talked with game designers who are so attached to their projects, it's like the games are their babies. This can be good, because it means designers really take the time to turn their ugly, fat, bawling pile of diaper filler into a useful member of society. And it can be bad, when 'parents' turn a child who might have become an exemplary model of behavior into a disrespectful teenager, who then goes on to spend most of his life in prison.

This thought occurred to me when I was playing Crossroads at Dark Lion Pass, though I keep having to go back and remind myself what the damned thing is called. Couldn't give it a catchy title, could you? No, you have to go and name your kid something as ridiculous as A'paul-o or Vulva. Seriously, I've seen both of those. The kids are practically destined to come out warped.

And the reason I thought of bad game designers screwing up perfectly good youngsters is because Crossroads at... whatever the hell it is... shows a whole lot of promise. It scored pretty well on the standardized tests, and was able to memorize the entire monologue for the Christmas play. But then the game designer screwed it up, and now the kid is bouncing between military schools and playing with matches.

The idea of Crossroads is that you have a team of adventurers moving through the countryside and overcoming obstacles to finish the big quest. Players will take on the roles of those characters as they battle brutally ugly monsters and win oddly pointless treasure. The player with the most experience at the end of the game is the winner. Since I very much enjoy adventure games, this shows a lot of promise.

But there are so many things the designer did wrong. Starting with the art and proceeding to the ludicrously messy arithmetic (but not ending there), this promising and potentially entertaining game ended up smoking weed and hanging out behind the gas station on school nights. Even worse, the fun parts of the game are buried underneath laughably horrible art and staggering piles of completely unnecessary math.

The ideas are so good. You'll compete for the experience you need to advance, with players gaining more points for doing more damage. The first few monsters will probably kick your asses, but eventually you'll learn enough to face down the meanest boogers with little more than a scratch. By the end of the game, you'll be juggernauts of violent power, with magic weapons and incredible abilities and powerful card combinations. So far, Little Johnny is practically an honor student.

One moderately neat feature is that you won't automatically play the same guy every time. Each time you start a quest, you'll bid for the chance to pick the character you want. If you've spent all your experience buffing out the fighter and someone grabs him first, you might find yourself with a really weak bard as your only option (let's face it, bards are like leftover D&D characters). You may have to balance your character growth to have a good chance with all the characters.

There's an awesome card management system where you try to get good combos, and you have to discard some cards to move the party forward. This works pretty well, and has you trying to decide between one more step towards the goal versus the healing spell you need to stay alive for a few more fights. You'll need to maximize one color card, but you have to be careful because that can backfire if you wind up playing the wizard when you have all the cards for the thief. Little Johnny looks like he might just graduate sixth grade, after all.

But when you introduce the ridiculous experience system, Johnny starts shooting heroin and selling stolen car stereos out of a van. First, monsters have hit points based on the number of players, like 14 per player. So if there are four players, just multiply 14 by 4. If there are 6, it's 14 times 6. I could tell you what that is, but I don't have a calculator handy (that's a lie. I'm on a computer. I just don't feel like looking it up). Then every point of damage you do earns you 10 experience points, which means if you do 22 points of damage, you get 220 points (I can multiply by 10 just fine) and then subtract those 22 from the monster's total, which is whatever you got when did that multiplying from before. You'll need to be writing this down.

To really get Johnny hooked on cheap whores, you need 100 points to get a level, and if you have less than 100 leftover, you just record it in the little box on your disposable character sheet. So now you have pen-and-paper accounting in a game about killing stuff. Happily, you can use the back side of this sheet to keep track of the monster's life, which is great because you'll need some place to do all the irritating amounts of math that you probably can't manage in your head.

And then it gets really bad when the alternating character system falls apart. It's a cool concept, but eventually, people are going to dump their points and focus their cards into particular characters. If you do this, everyone else would be wise to do the same, and then you're all basically playing the same guys for the whole game anyway. The whole character-swapping system is almost entirely ruined because the smartest way to play is to do away with it in the first place.

The movement mechanic seems like it should be pretty cool, with players trying to steer the movement to get experience for their own characters, but it ends up feeling a little silly. You just play out this pointless dot-to-dot exercise, and nothing happens until you get to a quest. If this were a cooperative game, players would be steering towards the places that benefit the group, and actually having to make some tough calls after a little discussion. Instead, some people just get hosed. Better break out the bail money - Johnny is hot-wiring cars again.

As if the rest of this sloppy, underdeveloped game weren't bad enough already, the graphic designer for this game must have been completely blind. The art, for lack of a better word, is completely horrible. Some of it is crudely drawn on a computer, and the rest is cribbed right out of clip art collections and manipulated to be more ugly. Seriously. I'm not making that up. In more than one case, they would have been better off just using the picture they got in the first place, and not messing with it. Pictures are stretched, filtered, poorly clipped and otherwise mutilated. The image for the Back Stab card shows a naked man coming uncomfortably close to a horse's behind. Now Johnny appears to be sexually assaulting the neighbor's pets.

The end result of all the bad decisions that went into Crossroads at Dark Lion Pass is a game that is barely enjoyable, and almost unplayable. You can see the promise this game had at the start, but it crumbles to cigarette ashes at the club-fisted hands of the designer who thought he was finishing it. I would hate to have my name attached to anything related to this game, outside of a review telling you not to buy it, and I can promise you I won't be playing it again. I'm not a big fan of recalcitrant youths in real life, and games that make me think of teenage burnouts are definitely on my 'to be avoided' list.

With a little luck, this game will go to prison and find Jesus. Then it can come out and be a productive member of society. It will need a mentor to guide it, groom it, and for God's sake, get rid of all that clumsy math.

Pros:
So much promise
Neat premise

Here's a warning. Keep your kids off drugs, and don't let them play Crossroads at Dark Lion Pass, or they might turn out like this:
http://listverse.files.wordpress.com/2009/04/lindsey-lohan-drunk.jpg.jpeg
Posted by Matt Drake at 4:37 PM

It's 84. Now that came to me instantly without the use of a calculator. Shame on your Algebra teacher.

Notable humor: as soon as I saw the cover image for this one, I knew that it was not going to go well. ROFLMAO

that is some funny shit I tell you! Thanks for the heads up on this one!

Come now... I have played the game and you are correct that the art really sucks but the game play and strategy were solid as long as you have graduated from 3rd grade math.

I would say that if you cant handle multiplication of 6x14 than the strategy was probably beyond you. As a D&D player keeping track of things is a part of the game.

With that said you have written a funny review.

Last Anonymous guy, I would agree with you, except that you're wrong. The game is not good. It is bad.