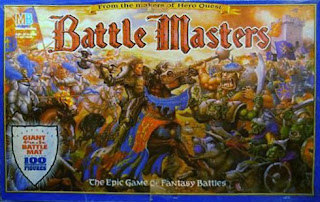 A few weeks ago, I was doing a little cleaning in my closet. Way at the back of the closet is a tiny cubbyhole under the stairs. If my house was empty, it would be hard to reach, but I've lived in my house almost ten years, so finding the back of that particular closet consists of wading hip-deep through a decade's worth of discarded exercise equipment and old dog beds. It was herculean, is what I'm trying to say.

Anyway, while I was under the stairs, I remembered that I had a box full of games under there. Because, yes, I need more games. These games were stored more than six years ago, so it was kind of like finding buried treasure, except that in this case, the treasures were games, and they weren't buried under dirt, they were buried under the VCR, old Playstation 2 games and an incredible number of couch pillows that did not leave when we got rid of the old couch.

The real hidden treasure in that rediscovered box was an old game called Battle Masters. I traded for this puppy a long time ago, because I wanted an incredibly unwieldy game in a box the size of a lifeboat with literally hundreds of plastic miniatures and a map that small children could use to create a pillow fort. I played it when I got it, but for some unfathomable reason, I decided to put it in an even larger box and store it for later. Fast forward half a decade, and I run across it while searching for the Lost Ark (apparently the American government found out how hard it is to look under my staircase, and decided to move the Ark after Indiana Jones found it).

Come to think of it, the reason I initially stored the game is not that hard to fathom. In fact, once I pulled it out, dusted it off, and played it again, I was reminded why I stored it - it's not a very good game. Sure, there's a ton of plastic, and a plastic mat the size of a child's bedsheet (that's not an exaggeration - it's over 5 feet long). But it's about as deep as a puddle of warm dog piss, and so painfully random that it is exceptionally difficult to have a good time playing it.

In Battle Masters, two players set up on the floor (because just about nobody has a big enough table to hold the mat) and set legions of plastic warriors against each other in a blood-soaked fantasy throw-down. It's obviously licensed from Games Workshop, with chaos warriors and beast men fighting the warriors of the Empire, and there's even a big tower that you can claim and rain arrows down on your foes. It looks so incredibly cool. Too bad it blows.

Battle Masters is one of the earlier games to use the skulls-and-shields, Stephen-Baker method of conflict resolution. You may have seen this rather popular game mechanic in a little game called HeroScape. Only where HeroScape is a brilliant game with depth and strategy and tactical genius, Battle Masters is barely fit to be a child's toy. The dice thing is great, but the game is a waste of time.

The reason Battle Masters is less fun than just playing with army men is because of the cards you use to figure out whose turn it is. You have a single deck of cards, and these cards have pictures of all the various guys in the game. If you pull the card with the knights, then the Empire guy can move his knights. Pull the ogre, and the Chaos player can send his ogre marauding and killing and trampling. Pull the goblins, and they're probably stuck behind the river and have to skip their turn entirely because the beastmen are in the way, only the beastmen also can't move because they're blocked in by the orcs.

Sooner or later, you're going to have one player sitting on his hands while the other player takes six or seven turns in a row. It doesn't matter how well you shuffle, either. It's just the odds. Give the game enough time, and eventually the Empire player is going to have to just watch while the chaos knights and evil archers run through the knights and men-at-arms like poop through a goose.

Using a completely random draw to determine the next player turns a lightly strategic game with objectively awesome pieces into a frustrating chance to watch the game play itself. It doesn't even feel like you're in charge of anything. You're playing with your toys, and you don't even get to say which ones you'll play with! No wonder this was hidden under six years of retired baby clothes.

But now that I've got it out of the closet, Battle Masters is staying out. My daughter and I have ideas for how we can turn it into an actual game, instead of a stupid way to play with action figures, and once we nail down our house-rule rewrite, I think it will actually be fun. And if it turns out to still be a dud, I can always list it as trade fodder, or maybe just use the archers and horses to make chop-shop centaurs.

Besides, even if it's a dud, the stuff in this box is just plain amazing. More than a hundred cool minis, a fully three-dimensional plastic tower, and a plastic game board that could double as a tablecloth - not to mention the piles of cards, flags, terrain tiles and other stuff in the box - make Battle Masters fun as hell even if all I do is set it up in the middle of the living room floor. It needs new rules, very badly, but for a grown man using games as an excuse to play with toys, Battle Masters is like a time machine to my youth. Or maybe like discovering a lost warehouse full of arcane treasures, but instead of priceless artifacts of mystical power, you find dusty plastic soldiers and all the pictures you took off the fridge after the kids finished third grade.

Cons:
Playing the game reminds me why I stored it in the first place

I don't have the foggiest idea where you could find a copy of Battle Masters. Try eBay, if you just plain have to have it. Or just break out your Ninja Turtles action figures and play with those.
Posted by Matt Drake at 9:08 PM

I used to play that as a kid. I remember the Christmas I got it I played it like 14 times in a row. Now its at my parents house and my 7 yr old nephew loves it. We learned long ago to put the good guy cards and the bad guy cards into two different piles, one for each player. Still not complete tactical control, but at least you get an even number of turns.

I have some ideas Matt as I had the same issues. I own three copies though so I will keep it until my rules work.

Dibs if you decide to trade it! :)

My copy has also been sitting in storage for more than a decade. In fact, it has been tucked away at the bottom of my game collection for over 16 years.

Now I remember why it has been untouched for so long. Perhaps it is time to take it out and see if I can cannibalise the parts for something else. Or maybe it is just time to toss it out. Hmmmm. What to do.

About once every three months this hits the our Board Game Group's table, with heavy modification, it's a hoot.
Sure it's beer and pretzels, but once in awhile that's what we're looking for.
Anyone who is looking to dump a copy I'd love another.

Dang it, ninthdoc beat me to it.

I can remember going into the local game store at the mall and seeing this beast set up on the floor. It was completely captivating.

I'll definitely take a copy off of someone's hands, since the game wasn't what I'm after so much as the toys.

I managed to find a mostly complete copy of this at the BGGCon Flea Market the day after Matt posted his review. If anyone decides to sell theirs, I'd love to fill in the gaps.

There's a ton of copies for reasonable prices on Ebay, and there's even...AN EXPANSION!

I scored a copy of this still on sprue off of eBay last year for something ridiculous, around $40 before shipping. Unfortunately, it's one of those games that wants painting before it's played, and it's at the back of a long queue behind Descent and Space Hulk...