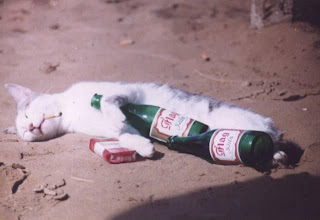 You probably know someone who has a lot of stories that start with, 'We were so wasted!' (if you know me, then you definitely do). I have some crazy drunk-man stories from my youth that include drunken brawls, wild strippers and waking up in a bathtub. We even had the paramedics come out one time. Ah, to be a kid again. Given the chance to do it all over, I would definitely not do all that stuff.

But with all my incredible tales of alcohol-fueled stupidity, not one ever included police watching over us and driving us home. Any time our stories did include police, it was generally because the party had reached critical mass and the neighbors were complaining. That, or someone was outside naked.

All that changed last weekend, when I was invited to participate in alcohol training. See, the local police academy has to teach cadets how to perform field sobriety tests and spot drunk people, and to do that, they need real live drunks. Obviously, it was important for me to do my civic duty and help out my local police force.

What followed was one of the greatest parties I have ever attended.

A police cadet met us at my house and drove us to the training center. It seems that after the police get you drunk, they would rather you did not drive home. So our cadet friend was our designated driver. The rest of us were designated drinkers. Really, that's what the instructors called us for the rest of the evening - drinkers. Nice of them not to call us drunks, if you ask me.

We were given a choice of poison at the door. Sadly, the only beer available was Coors Light, and I would almost rather drink my own urine than a Coors Light, so I decided I would be drinking whiskey. Which, also sadly, was Crown Royal. Still better than Coors Light, though.

The head cop told us that we would be asked to drink four drinks in the next two hours, with pizza halfway through. I scoffed initially - four shots of whiskey is how I get through Christmas morning. But when they poured the first glass into a little plastic cup, and it was at least three fingers deep, my scoffing turned into mild panic. Four glasses like this were a sure indicator of a powerful hangover, and a potentially felonious evening.

I very seldom get drunk at all any more. One thing I learned from years of consumption is that when you put 26 drunks in one place, you're virtually guaranteed to see someone lose a tooth. But when the police are monitoring your alcohol intake and strictly cutting off everyone as soon as they are thoroughly smashed, you avoid that part of the night when everyone slides into 'mean drunk' mode. And when you know that taking a swing - even a sloshed 'didn't mean it' half-punch - is likely to get you slide-tackled and handcuffed, you're all likely to be a jolly band of drunks.

Having a half dozen police officers watching over you as you slide rapidly into inebriation has a very calming effect on a party. We still laughed too loud, yelled happily at people only three feet away, danced to very loud music and otherwise carried on like a bunch of hammered frat boys. By the time they served me that last huge glass of Crown, I was completely sideways. But where the potential for idiotic bloodshed would normally be about DEFCON 4, all those police just made sure we had a good time. All we really needed was babysitters!

After two hours of revelry and a whole hell of a lot of booze, it was time for the testing. I figured the party was winding down, which was a shame because I was just getting started. I could have been rowdy and stupid for at least another two hours, but now I had to pretend I was sober and try to convince the cadets that I was safe to drive. But the testing was nearly as much fun as the drinking, as we joked and laughed and rode our buzzes for another hour and a half.

The cadets were very good sports. I know I was irritating. I had to be. I don't really remember anything I said, exactly, though I do know I was able to do my ABCs backwards. I also remember that, when they told me to tilt my head back and close my eyes, I told one of the cadets to stand behind me, because I was virtually certain to fall down. When one group asked if I would do some tests for them, I remember saying something like, 'maybe we could just skip to the part where you put handcuffs on me and let me sleep in the back of your squad car?'

The ride home was jolly, rowdy and fun, though I doubt that our cadet friend had as much fun as I did. I was in a terrific mood, but then, I was completely trashed. I went home and ate another half a pizza, drank two gallons of water, and went to bed.

As much fun as I had, I don't know that I would do it again. It was a fantastic party, and I had a blast, but that morning I woke up in some serious pain. I hate to think how much it would have hurt if I hadn't instinctively slammed a couple milk jugs of water (a lesson learned most painfully from a misspent youth). I still slept until almost noon (though for most of it, I was not sleeping, I was passed out. There is most certainly a difference, as any seasoned drunk can attest), and then woke up with a hankering for greasy food and Ibuprofen.

Alcohol training is the kind of thing I recommend you do at least once. If you're a real fan of drinking heavily, it's a cheap way to get a killer buzz, and the cops keep all the stupid to a minimum. It's safe and fun and free - but you'll pay for it in the morning.

Pros:
Get trashed for free
Cops keep you safe while you get hammered
Good clean fun
About the only time the police will thank you for getting drunk

Cons:
Really crappy booze selection
The hangover might be a bitch

If you want to know more about alcohol training... good luck. I only found out about it because my friend knows a cadet. But it's worth investigating, if you're a fan of the devil's drink.
Posted by Matt Drake at 4:05 PM

Brilliant! How do you get invited to one of those?

(That cat picture cracks me up.)

Your guess is as good as mine. Have some crazy friends who know cops - that's what I did.

that is such a great story. If you chose beer would it have been just 4 beers?

No, my friend went with beer, and he had to drink ten.

You are now my personal lord and savior. Anyone that can get picked up by the cops, get drunk on their dime, and get a ride home, even after being obnoxious and blatantly pissed must clearly be either the second coming or the luckiest sum'bitch on the planet.