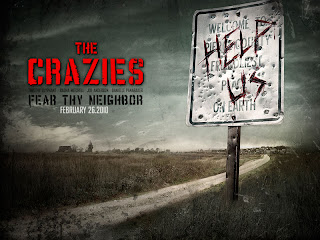 I hate gross-out horror movies. For one thing, they're almost always really stupid. Take the first Saw movie, for instance. The cops are completely mentally handicapped - they get a tip on the biggest serial killer in the world, and decide just the two of them will go check it out. I watch Cops, and real cops call for backup if they pull over some bonehead and find out he's got a joint in the glovebox, but these two flatfoot dicks go tromping into the trap-laden house of horrors and never even bother to let the dispatcher know that they're at a crime scene.

Another big issue with gross-out horror movies is that they seem to be an excuse for some twisted writer and sick-ass director to show us the most unimaginably horrible ways people can die. I have no desire to see people skinned alive or butchered for meat, but those are practically light-weight compared to the awful acts that get perpetrated on innocent people in these ferociously disgusting films.

So, when I tell you that I went with a friend to see The Crazies this weekend, I want you to understand that I went to spend time with my friend, not because I wanted to see the movie. The ads make it look like a sick horror movie, and I didn't want to see that at all. But then my friend pointed out that the movie is from George Romero, the reigning king of zombie movies, and so I decided I could live through it. I do love zombie movies.

Boy, was I surprised to find out that the movie was a whole lot better than I thought it would be. That's not to say that it had a wealth of redeeming features, or anything, but for starters, this is not a blood-drenched festival of the disturbing, the way the commercials made it look. It's actually a pretty smart movie, and while it's still campy horror with a fair number of dead bodies and a huge budget for red corn syrup, it's actually got a cool plot, sympathetic characters and some exciting scenes.

Now that I've summed up a bit, I'm planning on spoiling a little. If you're one of those 'don't tell me anything lalalala I'm not listening you'll ruin the movie' people, you'll want to stop reading. I don't think my review will ruin the movie for you, and I'm sure not telling you the ending, but I will mention a few things you may not want to know.

For starters, the crazed killers in this movie are not the most horrifying element of the film. Sure, the psycho killers are sketchy, but they're nothing compared to the soldiers that get called in to deal with the menace. The scariest parts of the movie (for me, at least) feature the U.S. military as the villains, instead of the warped psycho killers. Like zombies, the crazies are unable to control their killer instinct, while the soldiers are heartless and evil and terrifying in their willingness to inflict harm. Ironically, the soldiers believe they are completely justified - but they wear protective masks the whole movie, turning them into faceless killing machines reminiscent of Terminators or German shock troopers. One interesting scene involves the humanizing of one soldier, and serves as the bright spot of light that makes the rest of the military actions that much darker.

Timothy Oliphaunt does a good job as the sheriff who goes through Hell to save his wife, but he's completely outshined by his deputy, a relatively unknown actor named Joe Anderson. If this performance is any indicator, Joe Anderson has one hell of a promising career ahead of him. The sheriff's wife is almost a throwaway character, basically uninteresting, but it's almost worth watching The Crazies just to see the loyal sidekick portray a level of depth that you just don't expect to see in a scary movie.

I've been talking like the movie is smarter than you might expect, but before I sound like this is high-brow fare, let me make clear that there are still some seriously nasty parts. Pitchforks to the chest cavity are pretty bad, but the guy with the bonesaw is worse. And the walk-in fridge full of bodies is even nastier. Romero has never had a problem showing us ugly deaths, and he doesn't switch it up on us now. Blood and guts and painful demise are the order of the day, and the lucky victims get shot. The unlucky ones get their faces sewn shut.

In the end, I was surprised at how much I liked The Crazies, but that's not because it's a great movie. I was surprised because I was expecting total suck, and got watchable. This is not a great film, but it does pick up some credibility from some good performances and a bit of impressive intelligence in the story (although there were some stupid parts, like the idea that the town water hits one side of the town several days before it gets to the other side). There are some clever uses of horror movie cliches, a few cool fights, and the scariest car wash in the history of film. Several times I knew something bad was going to happen, but still jumped a little when it did.

If you like Romero's zombie movies, you'll probably at least be entertained by The Crazies. But you might just wait until it comes to your local Red Box, or throw it in your Netflix queue and watch it where you can have a plate of nachos that don't cost you a second mortgage. This isn't destined to win any Oscars, I can tell you that.
Posted by Matt Drake at 5:10 PM

Thanks for the review Matt. As a zombie and Romero fan myself, I wholeheartedly approve of this review!