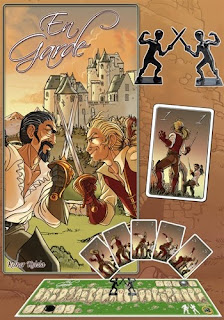 Reviewing games is kind of a mixed bag. I get a lot of games, but I don't always want them. I would love to only get the games I want, but it doesn't work that way. I'll get Arkham Horror one week, and the next week I'll get a box full of Reiner Knizia games.

To be fair, I do like some Reiner Knizia games. I love Blue Moon, for example. But so often, a Reiner game is just boring math wrapped around a stupid theme and packaged with two rules and some winning conditions. When I opened En Garde and saw the little metal fencers, I was somewhat optimistic. When I read the rules, I was less enthused.

Since this is a game about two people trying to stab each other, it's no surprise that only two people can play it. Each player gets a metal figure that they put at each end of a numbered board, and then they play numbered cards to move closer to each other. If you play a card that puts you right on top of the other guy's metal dude, you stab him. When you manage to stab the other guy five times, you win.

And yes, it really is as lame as it sounds.

That's the basic game, though, and if you play it once, you'll wonder why it was included at all. There's absolutely nothing interesting about the basic rules. The pieces are nice, and the card art is pretty darn cool, but you might as well just throw cards on the table at random. It's boring. Happily, there are two more sets of rules - standard and advanced.

Standard rules add the ability to parry, which adds a little hand management to the game. It's still not enough to be fun, though, and you're definitely not going to want to play to five points. You could end up doing the same thing ten times, and that's going to get old in a hurry. So the standard rules are still boring, even though they are not as boring as the basic rules.

Finally, the advanced rules add charging attacks, ripostes, strategic retreats and other stuff that finally makes this a game, and not just half an hour you'll wish you could get back. Now you have to do more than just manage your hand and do math in your head. Now you have to time your attacks, pace your advance, and continue to do math in your head.

When you play with the advanced rules, with the charging and retreating and parrying and riposting, En Garde is a pretty fun little game. You'll discover strategies, plan your moves, position for defense and bluff for attacks. You'll try to draw your foe into a charge that leaves him open, and you'll try to maintain the distance you need to prevent swift hits you can't block. And then, right when the match gets really good, you run out of cards and have to reset.

This happens way too often. There are only 25 cards, and you waste a bunch of them just getting close enough to fight, and then by the time you're really hip-deep in strategic positioning, the round ends and everyone goes back to their starting positions. It's a little like when you're getting busy with your woman, and you make it all the way to third base, and then the phone rings and you have to go bail your cousin out of jail again. Just when it gets good, you have to drop everything and start over. Sure, there are some hokey-pokey endgame rules where you see who had more cards, but I don't want to win because I had more cards, I want to win because I stabbed you in the kidney.

I think the best way to play En Garde is to buy two sets and give each player a set of cards. Now play until someone loses an eye. If you run out of cards with these rules, it's because you're both sissies who are too scared to do violence, and then you can play with the 'both players are sissies' end rules. If you don't want to buy two sets, I suppose you could reshuffle when you run out of cards, but then it would be harder to count cards, which is an important element of winning this game.

Right out of the box, En Garde has a bunch of promise, but not enough cards to really play the game properly. I'm sure someone who loves this game would say that I'm doing it wrong because I want the round to end in a brutal stabbing, but frankly, I don't care. If I play a swordfighting game, I want there to be some bloodshed. Trust Reiner to make a game about sword duels that you can win without cutting anyone. But it is a pretty cool game, and the maneuvering part is fairly well done. The pieces are really cool, and the art is neat. If they had just put a few more cards in the box, it would feel like a fun sword game, and not a bad case of coitus interruptus.

Cons:
Not enough cards - too often, feels like it stops just as it's getting good

Dogstar Games isn't carrying En Garde right now, but you can run over and get it from the nice folks at Eagle Games. You just might want to get two, and put the cards together to make a whole game.
http://www.eaglegames.net/ProductDetails.asp?ProductCode=GRY00232
Posted by Matt Drake at 8:13 PM

$60 to make a decent game viable seems like quite a lot. Is it really worth that much for how much game you'd be getting?

Now isn't THAT a confusing game title - I was trying to figure out if Slugfest Games had redone their game ...

Yeah, I know, right? Turns out Reiner made his first, and this is a reprint.