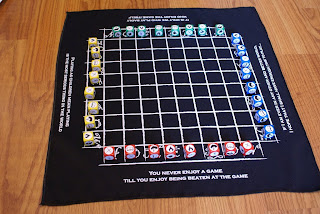 I should have a warning label or something. I would think that the title page alone - 'crassly opinionated game reviews' - would be a pretty decent hint that I'm not always a very nice guy, but it seems many people ignore that completely. But just to be perfectly clear, to put any budding game designers out there on notice:

The surgeon general has determined that letting me review your crappy game can be bad for sales, not to mention what it will do to your ego.

Uncle Chestnut's Table Gype is a good example of a game where the designer would have done well to read that warning label. Alas, he was inattentive, and apparently never read reviews of stuff I didn't like. Well, Uncle Chestnut, you probably should have done a little more homework. Table Gype is rife with examples of things that make me walk away in a hurry.

For instance, the board is a napkin. I don't mean it's a board that has napkin art on it, I mean the game board itself is silk-screened onto a black cloth napkin. And this napkin does not want to lay flat, which makes the game slightly irritating to play. A napkin is what you use in a restaurant when you need to write something immediately and can't find a piece of paper. It is not a game board. I've seen nice cloth game boards, but those boards are actually cloth, not napkins. This game board looks like it was stolen from a neighborhood Mexican restaurant.

Also, if you do intend to include quotes around the outside of the board, do yourself a favor and hire a damned editor to check your work. Do not put sloppy mistakes right there on the board, especially when the only reason the quotes are there is to show that you have a fondness for GK Chesterton.

Another irritation point is that the game comes with 32 blank dice and about 200 stickers, and you have to peel all the stickers and put them on the dice. And since there are six different symbols, you also have to be really careful so that you don't end up putting two of the same thing on one die. Because then you will feel retarded, and worse, you will have spent an hour putting together your game just to decide that you would rather play Parcheesi.

And you know what? I don't give a flying hairless rat's ass about GK Chesterton. HG Wells has some stuff that would make great games. CS Lewis had awesome material that could be mined for a fun theme (I mention those two because they were writing at the same time, and they shared Chesterton's unfortunate luck of having two letters for a first name). But I have trouble imagining what makes a master of Catholic apologetics into theme fodder. I certainly have no desire to read a whole bunch of quotes, completely out of context, to explain why one side of every die is decorated with a human ear.

The final piece that makes this one of the worst-produced games I've ever seen is the box in which the entire bundle is contained. I'm sure the box was very affordable, but I still question the wisdom of using those flimsy plastic boxes that Save the Children uses to send you cheesy Christmas cards as a way to thank you for giving them ten bucks a year.

Now, here's the worst thing - this is a fun game. It would be a lot more fun if I didn't have to assemble it myself and then play it on a cocktail napkin while I read failures of subject-verb agreement, but it's actually very clever. It's like Chinese Checkers, but with dice instead of marbles, and you play it on a square grid. Your dice have to move from your home row to that of your opponent, and if you have four people playing, the middle of the board can turn into one heck of a sloppy mess.

Each face of a die has a different move it makes. The swords move diagonally. The book moves straight. The hat hops. The ear just sits there, which I guess kind of makes sense, because how the hell would a disembodied ear get anywhere at all? The potential answers to that question are more than a little creepy.

On your turn, you can move a die or roll it. If you jump over other dice, you have to roll them, which is a great strategy if your opponent has a fire about to do some immense string of jumps. It's best if you can turn it into one of those freakish ears. And then if you get your dice turned into ears, you'll want to jump them yourself, to see if you can't turn them into trees.

It will take about an hour to put the game together. Then it will take you about ten minutes to figure out how to play. It will take less than half an hour to actually play the game, unless you spend any time reading the game board or complaining about having to play on table linens. It's way more fun with four people, but it's still very enjoyable with two. It's a cool abstract with a bizarre theme, and if the components were not total bargain basement, I would be saying all kinds of nice things about it.

Look, I understand that the guy who made Table Gype might be an academic on a short budget with an immense fondness for Victorian Age literature. I can forgive a lot in a game, especially small-press stuff, but there are just too many things about this game that scream, 'I can't afford this!' Kudos to the guy for trying, but this is not a success. It's a fun game. It's just a pity that it comes in a recycled gift box and is played on a napkin.

Pros:
Fun abstract with chances for strategy, planning, and quick thinking
Interesting derivative of stuff created by some literary geniuses

You can check out Uncle Chestnut's Table Gype for yourself at:
http://eternal-revolution.com/266/uncle-chestnuts-table-gype
Posted by Matt Drake at 9:01 PM

how much does the game cost? If it is a decent game then the components wouldn´t bother me nearly as much as they do you I am guessing. An hour to get it ready is a lot of time. And I thought putting the stickers on Dirge took a long time,lol

Does it work with 3 people?

He wants $30 for it, which is insane because it's not worth more than $15. Maybe if he had used high-quality components and made a professional game, it would be worth $30, but it's not.

It does, however, work with three players.

Yeah, if I'm going to have to affix that many stickers, I'd just make my own print and play copy with components that didn't completely suck.

I'm intrigued by this game, but there is no way I would pay $30 for a 32 blank dice and some stickers that I could play on a chess board. If they were engraved dice with a better board and container/packaging I might be tempted.

Thanks for the review, Matt! I was aware of your style before I sent the game to you for review, and your passionate take was appreciated. We very much enjoyed the review!

A quick note on price: The $30 current price includes two games (the other is a card game). When Table Gype is on its own we may adjust the pricing based on distribution decisions yet to be made. While evaluating pricing we've compared it to games with similar style and components, such as Ogre Castle, Blokus, Chase, Knockabout and Sharp Shooters to name a few. The stickers we used are not cheap standard labels, but waterproof vinyl (making the game Cheetos-proof, as the youtube video demonstrated).

You also bring up an excellent point about the plastic case; it was not meant to be long term storage for the game, but just a shipping container. The entire game can be bundled up in the board and shoved in a pocket, backpack, etc. However, some gamers do assign extra value to sturdy, well decorated boxes with shrinkwrap, and such is a perfectly acceptable assignment of value, which Table Gype in no way satisfies.

Sorry to comment so much on your review, I really did enjoy it. And thanks for taking the time to assemble, play, and write about a game that was a bit outside of your preferred style.

Hell, Paul, I'm just glad you're not hiding in the bushes planning to burn down my house.

From Chesterton's intro to Dickens' Old Curiosity Shop: "Either criticism is no good at all (a very defensible position) or else criticism means saying about an author the very things that would have made him jump out of his boots."

The game is now available without the bonus card game for $19.99.

HI,
Uncle Chestnut's table gype game is really awesome. I like it. Nice idea, great job done. Thanks for posting.

i love this blog

Thanks for sharing such an interesting post with us. You have made some valuable points which are very useful for all readers