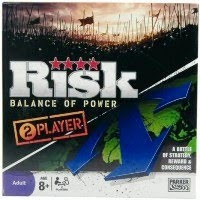 I've said before that I'm kind of a Risk whore. And by 'kind of a Risk whore', I mean I would be very likely to trade sex for Risk, as long as the person with whom I was trading was attractive and female, though in all fairness, if she was attractive and female, she would probably rather have sex with someone who was not interested in trading sex for board games. Now that I think about it, actually, I would make a horrible male prostitute, though I would be astonishingly affordable.

The neat thing about Balance of Power is that it is only a two-player game of Risk. It's still Risk, which means I know I will love it, but instead of the whole world, you're fighting over Europe, and there are a bunch of tweaks to make it work really well for two players.

Some of the extra stuff that makes this work so well as a two-player game include installations, which have no game effect outside being achievable goals, and rough terrain, where you can only attack with two guys, and thus have an extra bonus chance of getting your ass kicked if you try to steal them. Balance of Power riffs off the newly revised Risk, so the goal is not to win every spot on the board, but rather to achieve three goals before your opponent, so controlling both satellite stations is a pretty big deal.

The setup is completely new to Balance of Power, and reminds me of when I was a kid and had to share cake with my brother, and my mom would make one of us cut it and the other choose his piece. In Balance of Power, one player sets up the board, and the other player decides who he wants to play. So if you set it up so that blue is going to run roughshod over red, prepare to have several teeth loosened by your army placement.

Of particular note is that losing troops can often work in your favor. Every time you lose a guy, he goes on your troop counting card, and at the beginning of your turn, you can turn in some of those dead soldiers for bonuses. You could get more troops, for instance, or buy an airfield. You might get special forces who can roll all their dice when they attack the Swedish fjords, or you can get a statistical advantage if you attack an installation. This one little tweak means that if you really get beat down on your opponent's turn, you have all this ammunition to make a comeback. I don't think it would work very well in regular Risk, but in Balance of Power, this is a great balancing feature that prevents a humiliating loss just because your dice sucked for one turn.

But the coolest new bit that really makes this version of Risk brilliant is the neutral player. These tan pieces will be placed at the beginning of the game, but they don't attack. They just sit there and take up space. And if you spend some of those dead troops, you can get the neutrals all riled up, and they'll attack your enemy. This is really great if you're trying to get into a new space, because after they destroy all their own troops trying to knock out your enemy, they're ripe for the picking. A well-timed neutral uprising can virtually hand you some really key spots, which means that you may want to quit attacking your foe when he's in a position to stick his neutral boot up your ass.

The design shares the less-is-more look that you see with the new Risk, and I must say, I freaking hate it. It's ugly and dull and drab. The game is great, but the map is more boring than geometry proofs (in all fairness, I loved geometry proofs). And the pieces are total crap, too. Instead of little wooden squares, or little soldiers, you get flat arrows. These are supposed to make the board look like you're generals planning your assaults in the war room, but since the damned things are nearly impossible to pick up, the board ends up looking like a drunk guy giving directions on a map of the European Union.

The problem is, the game is a blast. It works great. But the map is so painfully boring that it eats a little bit of your soul when you sit down to play, and then you have to try to manipulate these ridiculous arrow-shaped wafers. So I think that since I love the game, but hate the pieces, I'm going to have to decorate it. It's going to need soldiers, and I'll have to redraw the map, but when I'm done, this will be gorgeous.

Oh, who am I kidding. I'm not going to take the time to do that. I'm just going to set it up and play it and complain the whole time, even while I'm having a grand old time invading Poland and laying waste to the Swiss Bank.

Cons:
The board is fugly
The arrows are in the advance running for most irritating boardgame pieces ever made
The Canadian version is actually missing a page of rules, which I had to get from BGG

I don't have the foggiest idea where you can find Balance of Power, but if you do find it, you should buy it. It's awesome, even if it is beat-down ugly.
Posted by Matt Drake at 7:52 PM

So, wait, if you trade sex for Risk, doesn't that make it not "safe sex" by default?

I trust all of your Risk reviews. Now I want sex.

Well, Matt, seems like you have your first customer! _TNT

Hey, didn't Hasbro also not release Risk Express in America? What do they have about not releasing good Risk variants in the U. S. of A.?

great review as always, now I want this game, I may have to try and find someone from Canada to bring it down this way - thanks for the heads up - how long does of game of this take?

found that comment about Canadian's to be offensive. I'm anadian myself and I like being Canadian. Please don't mock a nation if you know little about it. Next time think about what you are saying please.

damn old keybored. I hade a typo in my paragrath. I ment to type Canadian not anadian

This can't actually work, I suppose like this.
ford dealership | | attorney chicago