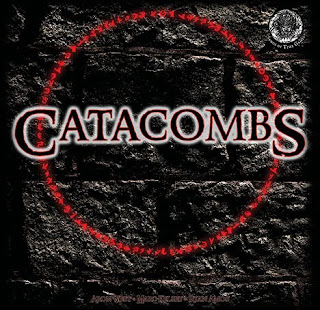 I like dungeon crawl games. I also like flicking games (you know, where you flick a little wood disc with your finger in an attempt to put out an opponent's eye, or lose the piece under the refrigerator). The question before me tonight, however, is whether you can mix flicking with crawling and make a fun game. I contend that if you do it properly, you wind up with Catacombs, which is, in fact, a fun game.

If you had asked me to create a dungeon crawl game where you flicked things, I probably would have butchered it. I would have added a silly number of extra rules, unnecessary components, and possibly some cheap, ugly art. Catacombs brilliantly sidesteps the extra rules and unneeded pieces, though they seem to have adopted the ugly art, maybe to make me feel better about myself.

Four heroes romp through a dungeon constructed of a series of rooms. Each room is listed on a different card, and corresponds to one of six large dungeon boards with holes in it. The holes get filled by obstacles like pillars, rock formations, or tables, though all obstacles are actually represented by gray wooden discs (which I suppose means the obstacles could be discarded tires or unruly grade-schoolers). The heroes and monsters are wooden discs as well, and you all take turns shooting them at each other (that should be clarified - ideally, you shoot the monster discs at the hero discs, or vice verse, and not at the other players). Hit a hero with a monster, and you cause some pain. Hit most monsters with a hero, and the monster is trashed.

So far, this is a pretty simple game. What makes it work really well is that considerable thought was put into two important factors. For starters, the components are all very nice - linen stock cards, a beautiful varnish on the boards, and nice, clean discs. The game looks really swanky, as long as you're looking at physical quality and not art. The discs slide easily across the room boards, ricochet perfectly off the obstacles, and knock each other right through the non-existent walls (frankly, walls might have been nice - it would have been awesome to bank an arrow off the wall).

The game also works pretty well because the designers put a good amount of effort into creating a reasonably balanced game. I suck at flicking games (I like 'em, I just can't play 'em), so when I was the bad guy, I got my tail kicked, though I did manage to exterminate one of the heroes before my dragon took a painful boot to the face. Had I been more competent with the flicking, I might even have managed to kill a couple more, and then it would have been a far more interesting contest. Not that it was boring at all - it was like playing a live-action miniatures game, as long as all the action is provided by hitting things with your fingers, and the miniatures are round pieces of wood.

This is not a massive brain-dump of a thinking man's game. It's fun, light, and fast-paced. You flick your discs, count your dead, and do it again. It sets up fast, plays fast, and can easily be enjoyed while sampling your favorite adult beverage. A group of intelligent game nerds can knock this one out in less than hour - maybe a lot less, if everyone is paying attention and not mocking the drawing of the troll. You won't find yourself paralyzed by a staggering array of choices, but there are still a few decisions to make, like when to play the wizard's spells and how to arrange it so that the thief gets to steal more money. It's basically an easy-going opposed cooperative game, so the only ruthlessness will be from one of two sources. Either the bad guy player will do some underhanded shenanigans to try to kill you (which kind of comes with the territory on games like this), or one of the other players should be immediately expelled from your circle of friends and possibly shunned any time you are in public.

So far, Catacombs is just a fun game. The creators spent a whole lot of money on components, and healthy amounts of testing on the rules, but must have run out of budget when it came time for art. One room looks like crinkled green aluminum foil, and the fire room looks like an old lady's varicose veins. All the art is amateur-hour pencil work - no color anywhere. The graphic design and illustration got the very short end of the budget stick, and it hurt this game pretty badly. The art doesn't cause it to totally suck, but it's definitely less fun than it could have been, just because it could have looked a hell of a lot better. You can tell me art doesn't affect game play, but I'll tell you there's a damned good reason I'm spending hour after hour painting my Warhammer Quest figures. When the game looks cool, it's more fun.

Happily, Catacombs is a fun enough game that you can get past the lowest-bidder visual problems and just enjoy shooting wood discs at your friends. The boards are big enough to accommodate some pretty big battles, and the variety of monsters you can meet means that the game should be playable for a good long time before you find yourself wishing for more stuff to kill. For any long-term replay factor, this game is going to need some expansions pretty soon. Hopefully it will sell really well, and they can afford to do a reprint - only this time, they might actually pay a competent artist to make some swanky cool art that could replace the pencil drawings and ninth-grade Photoshop textures.

Pros:
Easy rules let you jump right in and start shooting things at each other
High-quality components
Dungeon crawls and dexterity games work great together - who knew?

Cons:
Unfortunate art decisions make this a rather ugly game

This game is fun, and I really hope it does great. It's not actually out yet, but you can follow it and check for updates here:
http://www.sandsoftimegames.com/
Posted by Matt Drake at 9:35 PM

Both are slider games with a Sci fi/Fantasy theme. I am curious which one was higher in your regard.

I liked them both, but they're completely different games. Space Pirates is a tactical positioning game with a fair bit of strategy and some flicking. Catacombs is a dungeon crawl with some flicking. Both are lots of fun. I would probably be more prone to play Catacombs again, but that's largely due to how much I love dungeon crawl games, rather than which is the better game.

Hey I am looking for a game I had when I was younger and thought you might be able to help. It involved 2 players - 2 dragons that flicked disks and i recall bricks that you had to use to defend something. Also remember a catapult. All I know is it was awesome and I'm dying to find it again. Cheers

sounds interesting, but i have the feeling this might end up in a very ougly flying disc fight at some point when someone wants to be the funny one of the table.

Hi,
Catacombs is really nice game.Sounds interesting.I like it. Thanks for posting.......