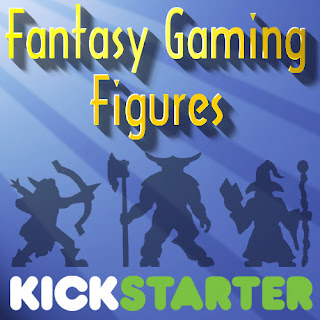 Last weekend, I wrote about Galaxy Defenders, and explained that I will only review your Kickstarter game if I am really impressed. And then, to prove that I am a lying bag of koala poop, I went on to review nothing but Kickstarter stuff all week long (though to be fair, the DrunkQuest game is actually a game, which you can buy now, and I just referred to the Kickstarter expansion).

This is relevant because tonight I am reviewing yet another Kickstarter thing, but this time, my money is where my mouth is. Before I wrote this review, I went and backed this Kickstarter, because I really want the figures they're selling. Plus they're cheap! Mine were like half a buck each!

In all fairness, they're cheap because they're laser-cut out of wood. These are fantasy gaming figures (tough to call them miniatures when they are more like silhouettes that stand up). Only they are cut out of wood like the little wooden men you find in every boring game that German people ever made about farming.

These flat wooden dungeon meeples elevate wooden game pieces to an art form. These puppies are awesome. I conned the guy who makes these figures into sending me a bunch from a game he already did, and I love 'em. I only got a dozen, and I really wish he had sent me many, many more, but at the same time, I did just buy like 150 figures, and I got them stupid cheap. So I'm probably set either way.

Here's how this works. The base set of wooden fantasy figures comes with 30 different figures, all painted in different colors so they're easy to tell apart on the table. There's a knight and a wizard, a thief and an archer, plus a few other heroes, plus some we'll get if enough of you agree that these things are great and go promise to give this dude some money. You also get scads of monsters - spider, rat, goblin, orc, troll, skeleton, and a whole bunch of others. But just one of each, so if you need a horde of kobolds, you will need to buy a metric buttload.

"But!" you cry, "I don't need six knights just so I can have six kobolds!" And no, you don't! That's the beauty! For 20 bucks more, you can just get a monster pack that has three each of the monsters you're likely to need more than once. Three zombies, three kobolds, three spiders, three rats - you get the idea. Need more than that? Buy more than one set!

Oh, and there's a dragon. No, strike that, there are TWO dragons. And if you get the figures from Dungeon Heroes (the ones I have) you will have three dragons! I think you would have to agree, that's pretty cool. Even if you don't ever need a dragon, they're like handguns - better to have one and not need it that need one and not have it. Except that I don't have a handgun, so I just have to stick with giant reptiles.

So we've gotten this far and you're reading along at home (or, more likely, from your desk at work) and you're saying, 'But Matt! I want regular old miniatures with sculpted faces and tiny brittle swords and for some reason all the girls are half-naked when they're supposed to kill things for a living!" And this brings me to a great excuse for me to explain exactly why you definitely need to buy these fantastic wooden figures. I present my reason with a sample scenario.

You are the DM. Your friends have just entered the lair of the goblin king, and you have thrown down a great map that you painstakingly built in Photoshop knowing full well you would use it for ten minutes and then throw it away. The heroes have lovingly painted miniatures, except for the one stoner who never bothered to buy a good figure, so his paladin is represented by a miniature depicting a disproportionately well-endowed woman in a bikini. And she is all gray, because he does not paint.

YOU: "Before you is the lair of the goblin king! He leaps up and directs his goblin minions to attack, then releases his pet mustard jellies as his shaman summons a small horde of giant wasps!"

GARY: "I cast silence on the shaman!"

YOU: "Oh, sorry, that's the warg rider. The roll of pennies is the shaman."

RALPH: "I throw a bottle of flaming oil at the mustard jellies!"

YOU: "Wait, no, those are goblins. This poker chip is one mustard jelly, and the river troll mini is the other one."

BETTY: "I scream a battle cry and charge the river troll!"

YOU: "No, there's no river troll. I just don't have a miniature for the jelly."

BETTY: "So what is the braineater with the squid head doing here?"

BETTY: "And the salt shaker?"

YOU: "Sorry, that's leftover from breakfast. I had eggs."

See how confusing that is? It sucks. Why bother having miniatures at all if you have to substitute all the time? You could use paper standups, except then there is always at least one person at the table looking at the pieces from the side and he can't tell what any of them are supposed to be. Or you could try to buy enough figures that you've got enough for every situation - and that will cost you two thousand dollars and you will spend the rest of 2013 and most of 2014 painting them so that the table is not full of gray metal, except that you want to play before you're done so you wind up with big battles involving three painted figures and ten ugly gray lumps.

These wooden figures are colorful. They are expressive. They are FUN. That's actually the most important thing - they're fun. And you can substitute at will, because they already assume a level of imagination. You won't get people asking you if that orc is really carrying a crossbow just because you ran out of orcs holding spears. You won't have to put a saber-toothed tiger on the table and tell your friends it's a dire wolf. People will ask for descriptions, and have to use their imaginations to improve the scene in front of them, and yet it will still look like a battle and it will still be fun. And since you don't have to use a dildo as a purple worm any more, the table will look consistent.

Now, I want you all to head over and pledge to buy some of these fantastic miniatures, and there are two reasons for that. First, I want this to succeed, because I think it's a great idea. And second, I have a stake in this now. If we can hit some of the stretch goals, I can get even more figures! And by God I want them!

Get over here and throw your money at this guy:
http://www.kickstarter.com/projects/coe/fantasy-gaming-figures
Posted by Matt Drake at 5:40 PM