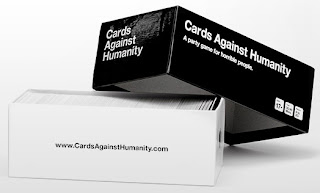 I do, however, have a fully functional funny bone, because while I may have suggested that I think about Auschwitz while making love to my wife, I laughed about it for a very long time. I laughed until my eyes were watering. I laughed until I couldn't breathe.

Our group actually played Card Against Humanity twice this weekend, but I passed on the first game because someone told me it was like Apples to Apples but for horrible people. And I absolutely despise Apples to Apples. That is such a pathetically stupid game that it calls into doubt the sentience of any human being who likes to play it. So when I heard Cards Against Humanity described as an Apples to Apples clone, I was out. And then as I was sitting on the couch catching up on emails and overhearing the game underway, I was disappointed I had missed it.

The thing is, Cards Against Humanity really is just an Apples to Apples clone. But the designers of the clone were not willing to just put a zany twist on a boring classic. They wanted to kick it up a notch, to make Cards Against Humanity a truly horrible exercise in word association. So instead of having cards that say stuff like 'penguin' or 'bomb' or 'Apples to Apples is boring,' their cards have answers like 'African children' and 'pooping back and forth.' I am not sure what pooping back and forth is, because I am a little scared to look that up in Google, but it is a good indicator of the caliber of card you'll find.

The questions, the ones that you're answering with your cards, are set up to allow you to make the answers even more disturbing and hilarious. A highlight of the game was when one friend was judging 'I've got 99 problems but a [BLANK] ain't one.' The answer he chose was 'an erection lasting longer than four hours.' And the person who gave him that card? His wife.

There were several other exceptionally memorable combinations in our game of Cards Against Humanity. I'm not going to go into all of them because they're not as funny if you're not all sitting around the table, laughing hysterically while you're grossed out and horribly offended. After a point, it's almost a contest to see who can come up with the most deviant combinations of cards. References to pornographic acts, religious bigotry and criminal proclivities will have you all falling down laughing. Some of them will be so offensive that you will start to wonder about the caliber of friends you have - but you will be laughing so hard, you may also question your own morality.

It should be stated clearly here that Cards Against Humanity is not a game for children. It's not even a game for adults with weak stomachs. There are cards with outright profanity, and those are the tame ones. Some of the sex acts described on these cards will have to be explained to people who don't watch a lot of porn. The cards you play will haunt you for weeks, but the haunting will be relatively benign because it will take the form of inside jokes your group of friends trots out every thirty minutes for the next six months. The game will make you wonder if you're going to Hell, but it will make you laugh so hard you won't care.

Players: It's a party game. Don't try to play it with two other people. That's stupid.

There are three ways to get Cards Against Humanity:

1. Go to their site, download it, and print one.
(http://cardsagainsthumanity.com/)

I'm glad you gave this game a try, it's so much better than Apples to Apples. I think A2A has it's place (I play it with my family since they enjoy it), Cards Against Humanity just lets me do all the things that I wish I could do in A2A. For example, my favorite A2A moment was when I was able to play "Hiroshima" for "Radiant". In CAH, this type of combination is common place, which makes it so much more fun. Though it's still more a terrible joke generator than a game, I love to play it.

And Jim, that is the best card.

The appeal of this game is the shock factor, but I've found that the novelty fades after the third game. It's definitely worth a play, but it's not a keeper for me.

I hate Apples to Apples too, and nearly passed this one up for the same reason.

This was better sober than A2A ever was drunk.

If you liked this one, Sharon, you should definitely try Word Whimsy. Holy mackerel, is that fun.