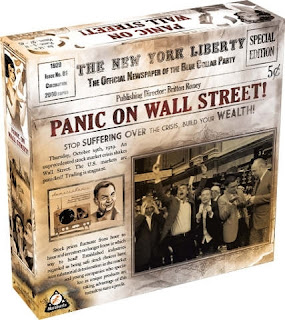 But until now, I had never played a yelling game. The Resistance has a tendency to create some yelling situations, but it's not technically about the yelling, it's more about the deceiving your friends, who then yell at you for lying to them. Panic on Wall Street, on the other hand, is all about yelling.

It's a pretty basic idea. You take a good-sized group and split it in half. Then you make half those people stock-brokers, and give them companies whose stock needs sold, and the other half are investors. The game has two winners, the best broker and the best investor. And there is a ton of yelling.

This yelling segment of the game is called the negotiation. There are other parts of the game, namely the parts where you try to get everyone to quiet down so you can figure out how much money they made, but the yelling part is the fun part. As long as you like yelling. If yelling very loudly and very often makes you uncomfortable, or if you like to relax and not get wound up trying to sell stock to your friends, you are unlikely to enjoy Panic on Wall Street. Me, I like yelling very loudly and very often, so I thought this was a hoot.

Once you finish the part of the game where you're not yelling, you will auction off more companies (this may involve some yelling) and then the next round begins. In the next round, just to mix it up and try for some variety, there will be a lot of yelling. Because it's basically the same thing again.

I did enjoy the vigorous and extremely noisy game of negotiation and yelling that we played. Unfortunately, I'm not likely to play it many more times. For one thing, you need a decent-sized crowd. There are rules for playing with three, but it wouldn't be the same game. To truly experience Panic on Wall Street, you need lots of people for maximum yelling. And it's rare for me to have eight other people willing to play a yelling game.

In fact, that's the second barrier that will stop me from playing Panic on Wall Street again - most of my gamer friends are not going to want to be involved in a yelling game. We usually get together, drink a few beers, crack wise, laugh, and play games that don't have overly complicated rules. The rules for Panic on Wall Street are easy, but it's very loud and not at all conducive to a relaxing evening. It's conducive to lots of high-energy yelling and possibly stress migraines.

So will you like Panic on Wall Street? That depends. Do you know five or six other people who like to yell at each other? If so, you will like it. If you only like to play games with your wife over a glass of wine, you will absolutely not like Panic on Wall Street. Or pretty much any other yelling game, although I don't know of any other yelling games.

Pros:
Hilariously fun if you like yelling
High-energy negotiation and some smart money management
Neat pieces that make you feel like a stock-broker

Cons:
Boy, is there a lot of yelling
Only a good game with a whole bunch of people

Whew, this is a good price on this game. If your pile of games is missing a yelling game, and you need to fill in that hole, you can get it right here:
YELLING GAME
Posted by Matt Drake at 4:48 PM

So, basically, this is a more gamerly version of Pit?

Oh yeah! Pit is another yelling game! I haven't played that since ninth grade, so I completely forgot about it.