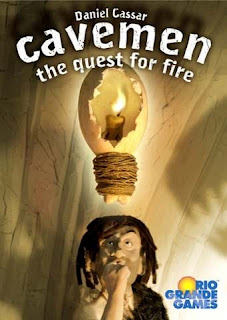 One of two things has recently occurred. One, Rio Grande Games forgot who I was. That, or they have forgiven me for my trespasses. Either way, they recently decided to up and send me some review copies. Only instead of sending me the game I was hoping to review, they sent games that haven't really grabbed the attention of the gaming populace at large. The theory being, I suppose, that a little more press would help push a few more of these games off the shelf.

Cavemen: The Quest for Fire was the first one I've played. And I hate to say it, but I think I can see why it hasn't been the surprise hit of 2013. It's not a bad game, precisely, but it's also not one I'm itching to play again. Plus the art looks like a junior-high kid made it out of Playdoh.

The object of Cavemen is to be the first player to invent fire. If you are, the game ends immediately, which I suppose means that technically, you would be the only player to invent fire, not the first, as 'first' suggests that there might be a second. And there's not, because the game is over after the first one. So I'm screwing this up already.

In order to invent fire, you have to improve the size of your gang of pipe-hitting cave-dwelling gangsters. Some of them will hunt for you, some will scout. Some will find food. Others will just do lots of thinking - and the thinkers are the ones you need to win, so they probably ought to get a raise.

The problem is, getting a bigger tribe is tricky. You need to feed them all, which means you have to either waste time running around after nuts and berries or you have to hunt dinosaurs. Yes, you hunt dinosaurs. Because whoever made this game was evidently one of those nutty goofballs who thinks the world is 1500 years old and cavemen had dinosaurs for pets. I like to call those people Flinststones paleontologists. Maybe they just wish they could have had a dopey pet dinosaur who thought he was a dog. Whatever, it's ridiculous, because dinosaurs were all dead way before cavemen came along, but we can overlook it because this is a card game, not a scientific debate.

So you'll hunt dinosaurs to harvest food and teeth, and you'll bid teeth against the other tribes to grab the conch shell, and then you'll be the only one allowed to talk at the beach meetings until Piggy gets chased across the island and beaten to death before the crazy kids set the trees on fire. Wait, no, wrong conch.

Oh, right, you'll bid teeth to grab the conch and get first pick of the cards that come up. You'll have first access to the best dinosaurs, the smartest cavemen, and the most thrilling inventions. Not only that, but you'll be able to go twice when everyone else only goes once, so having the conch is really pretty awesome. In fact, it's so good to have the conch that this is my first complaint about this Cavemen game (outside the cavemen hunting dinosaurs thing, and that's mostly just my personal pet peeve about people who let their religion replace their common sense).

See, it's so important to have the conch that it will almost always go to the guy who can bid the most teeth. And then that person will have the pick of the cards that come up, and he will probably decide to do whatever gets him the most teeth so that he can have the conch next turn. And then he'll still get another turn, so using his turn to make sure he gets first choice next turn is actually a good tactical decision. And that means that you stand a very real chance of having one person control the entire game while everyone else just throws up their hands and is bored. And that is one hell of a complaint.

But that's only my first complaint. The second complaint is that there are too many cavemen. Sure, it's a game about cavemen, and so there should be a lot of them, but there should also be enough caves and dinosaurs and inventions and stuff. If you can grab all the caves and keep the other players from getting their hands on them - which you can do if you can control the conch the whole game - you can effectively remove any chance at all that they might have to build a bigger tribe. Once again, one guy runs the game and everyone else sits there irritated.

The problem is, and the thing that really made me upset about the horrible balance issues in this game, is that the basics of this game are a good idea. The implementation is horribly flawed, to the point that I hope to never play Cavemen again, but the idea here is brilliant. Honestly, I think that if you just have the conch pass to the left every time, with no bidding anywhere, you would have a pretty decent game. But I don't know because I'm not testing it because right now I'm kind of irritated. Plus there's that Flintstones thing and the Super Sculpey art.

OK, that's it. That's all my complaints. I actually think Cavemen is a pretty cool game, but it has a couple things in it that just plain ruin it for me. The conch bidding and the unbalanced card counts make this cool little game into a mistake, but if you really want to play this one, just house-rule it a little and you might end up liking it.

Not me, though. I'm not playing this again. Which probably means I'm not getting any more games from Rio Grande.

Bad news: Cavemen is kind of broken. Good news: It's very affordable.
GET IT CHEAP
Posted by Matt Drake at 7:02 PM

I think your conch strategy isn't a sure thing. The conch holder needs teeth for bidding, and must spend one unit of food per caveman in the tribe. In my last game, I only held it twice. The last time was for the win. I thought it was fun, but not a future classic.