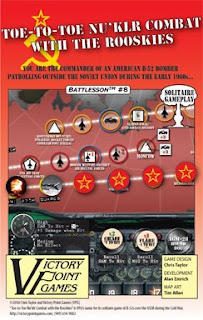 I like to play games with other people. That sounds like it should go without saying, but I bring it up because if I'm getting out cards and dice and cardboard, I do not generally plan to use those things to play with myself.

But sometimes it can be hard to find someone to play with me. You know, it's late, the wife is in bed, and I am overcome by a desire to play a game. I don't want to wake her up, so instead I just take care of it myself. It's not quite as enjoyable, and it can be hard to be satisfied that way, but sometimes you just gotta take things in hand and get them done.

Which leads me to Toe-to-Toe Nu'klr Combat with the Rooskies, because it's a solo game. You're piloting a B-52 and you have to drop nukes on Russia. Russia takes some offense and tries to shoot you down. Every turn, you'll fly toward different targets and try to rub one out.

This is not a tricky game to play. Every turn you'll move one step closer to your final target, and then you'll blast it to glass and turn around to fly back. MiGs and SAMs will shoot at you and try to blow you out of the sky, and you can choose how high to fly and when to fire flares or chaff to try to make them miss. If you choose poorly, they'll blow your wings off, but if you're lucky, they'll shoot blanks.

There's not a ton of reasons to play Nu'klr Combat over and over, but there are four different missions with varying levels of difficulty, so you can choose how hard you want it to be. The first one I played was easy, but they can get downright gnarly.

The game has a lot of luck, and your decisions are less crucial than your ability to get lucky, but this is meant as a light distraction, not a full-on simulation. It's quick and fun, with not a whole lot of meat to beat.

I wouldn't say Toe-to-Toe Nu'klr Combat with the Rooskies will be completely changing my mind about playing solo games, but it can be tough to find decent solitaire games, and this is a good example of a game that won't overstay its welcome. You can sit down, set it up in two minutes, and knock it out in fifteen more. It's fun, and it scratches that late-night gaming itch without keeping you up too late. In places it's even funny, like when you play the card that lets your bombadier ride the nuke all the way to the ground.

If you want a quick solitaire game with a dark-but-campy theme, you can run over to Victory Point Games and pick up Toe-to-Toe Nuk'lr Combat right here:
http://victorypointgames.com/details.php?prodId=119
Posted by Matt Drake at 2:39 PM

OMG Double Entendres! You make me laugh, thank you for that.