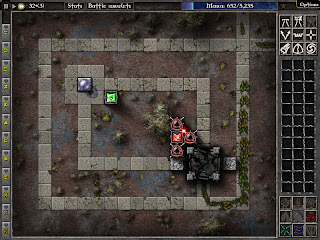 I have a problem. I cannot quit playing Gemcraft Labyrinth.

It would be one thing if I were addicted to a 60 dollar console game with immersive graphics and a deep storyline. It would be completely understandable if I were hooked on some mass-market MMO and couldn't stop raiding every night. But it's seriously embarrassing to be unable to stop playing a free game on the Internet.

OK, it's not entirely free. You can play Gemcraft Labyrinth for free, but if you pay five bucks, you can get more stuff. Like, in the game. And having played the first two Gemcraft games, and having loved them, I paid the five bucks before I beat the first level. It's been money well spent, because I have put way too many hours into this game.

To really heap shame on my sagging shoulders, Gemcraft Labyrinth is a tower defense game. It's one of those games where monsters come rushing toward your home, and you have to shoot them to stop them. With almost no exceptions, I hate those kinds of games. I find them insipid and unoriginal and dull.

But Gemcraft is different. Where most tower defense games are just clones of each other, this one is really, really smart. You can beat the first few levels with ease, but you'll find pretty quick that you have to be sharp if you want to keep winning. You'll be making tricky decisions the whole time - upgrade your big gem, or put in an amplifier? Block off all the walls now, or trust to one big gun to get the job done? Summon the next wave early for a little extra spending power, or hold off to improve your mana pool?

Gemcraft Labyrinth adds even more stuff than the previous two games. For one thing, there are a lot more maps to beat. For another, now you can build walls, so you can construct a death trap to keep the creeping boogers at bay for a really long time. Then there are tombs that you can bust open if you're feeling especially confident, and they'll dump a string of black monsters that will descend on your headquarters like the black plague on a dirty street urchin. Monsters have lairs that can let them pop out closer to your house than you might like, but you can blow them up, if you feel like allocating the resources.

Many of these lame Internet games have fairly pathetic art and sound, but the Gemcraft series has graphics better than some console games released in the last year or five. The sound goes with the game the way flavored paint goes with middle-aged couples trying desperately to find something interesting about their sex lives. The production on all the Gemcraft games is excellent, and that may be why I'm so hopelessly addicted to Labyrinth.

Of course, another reason I can't stop playing Gemcraft Labyrinth is that there is so damned much to do. There are more than 100 different maps, and you can unlock later maps by beating earlier maps. Most of the maps are just straight-forward kill festivals, but some of the cooler maps have different objectives, like charging special power reservoirs or creating super-gems.

As you play Gemcraft Labyrinth, you'll find yourself formulating strategies, responding to fluctuating conditions, and customizing the battle to suit your plans. Since you get in-game rewards for completing various tasks, like destroying a certain number of walls or building a set number of amplifiers, you may return to levels you already won to exploit their resources for more experience and a shot at unlocking the various special sectors.

The seriously crazy thing about Gemcraft Labyrinth, and maybe my only excuse for being addicted to a browser game, is that it could have been an Xbox game. If it were available on Xbox Live, and you could download it for 20 bucks, I would gladly purchase it and spend hours bogarting the television and pissing off my son when he wants to watch Supernatural.

I know I should step away from the game. I know I should be using my computer for work, and not whiling away the nights trying to beat just one more level. But I've only got four maps left before I've completed the game. I can't quit now!

Pros:
Very nice graphics and sound
Flawless - hasn't ever crashed or frozen or glitched
Smart and versatile and exciting
More depth than you'll find in a lot of expensive games
Free, unless you want to pay five bucks, and you should, because it's better that way

Cons:
So addictive, you'll be pissing in an empty milk jug so you don't have to leave your desk

In the ultimate case of try-before-you-buy, you can play Gemcraft Labyrinth for hours on end without ever putting in a penny - but it's far better if you'll just pony up five bucks:
http://armorgames.com/play/10317/gemcraft-labyrinth
Posted by Matt Drake at 6:21 PM

Just discovered this game myself and my god it's addicting. Good luck.

this is so funny and true. Kudos to you for making me laugh.