CCG Review - A Game of Thrones 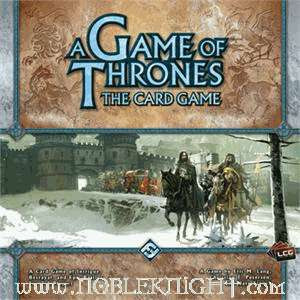 I first discovered A Game of Thrones in 2004, when my wife bought the book for me as a Christmas present. I had never even heard of it before that Christmas morning, but I discovered pretty quickly that I had been missing one of the best fantasy epics ever written. You can have Robert Jordan, Terry Brooks and Michael Moorcock. The Xanth stories barely held my interest, maybe because they seem like they were written for an audience composed mostly of twelve-year-old boys. A Game of Thrones was powerful, exciting, fascinating, and incredibly well written. Tolkien's work might be better, but A Game of Thrones is still my favorite.

And yet somehow, I never managed to play any of the games based on the books. There's a board game that's supposed to be decent, and a card game that has been in production since 2003, but I never tried either one. I was even content to leave it that way, until I reviewed Warhammer Invasion, and a reader mentioned that he preferred the Game of Thrones LCG. After that, I checked out a couple reviews, and it seemed like it might be worth investigating. Plus my wife likes CCGs, and when I mentioned the game, she went and bought us a copy.

It turns out, this is one hell of a game. Like the books, the game has a whole lot happening all the time, with hundreds of characters, plots and intrigues, wars and assassinations, and enough supernatural to keep things interesting without turning the whole thing into a D&D Monster Manual. You don't have to keep track of two or three different effects every turn. You have to keep track of a dozen, maybe more, and an inattentive player is almost guaranteed to take a very painful ass-kicking.

Some things work like nearly any CCG. Every turn you'll get money, and then pay it out to play your cards. Different cards have different abilities, and different characters are stronger than others. But what makes a game is not where it is the same as other games. What makes a game is how it's different, and A Game of Thrones has a whole lot of important differences.

For instance, you don't just attack when it's your turn. There's no battle phase. Instead, you'll have a chance to perform military challenges, or intrigues, or power plays. Commit your forces to a game of cloak-and-dagger, sending in your best schemers, and you'll force your foes to throw away their best cards. Recruit entire armies to march against your enemies, forcing them to choose which of their loyal followers (or barely-loyal mercenaries) will fall before your might. Or maybe just cut right to the chase and make a grab for the throne, because in the end, the winner is the one who can grab enough power to name himself the king. If this sounds heavy, it is - but it gets worse, because you have to make these choices every single turn, and it's almost never an easy decision.

To make matters worse (or better, depending on how you like your games), nearly every character has multiple things he or she can do to help. A knight might be a fantastic military asset, but his best use might just be to sit on his ass and get more popular every turn. It might be a good idea to save your most powerful fighter to defend against the almost-certain assault your opponent will launch on his turn, but if that mighty warrior can succeed at a quick intrigue, he could grab a little renown, which will help ease the pain when he starts burying his friends after the inevitable retaliation. Some characters might be best used to prop up others, and some are just really good at taking a sacrificial spear to the soft parts, but nearly anyone you could bring into play has several different ways to help you win - if only you could manage to choose the right way.

One thing that really sets A Game of Thrones apart from just about every other card game is how brilliantly it plays with three or four players. Where most CCGs add multi-player rules as an afterthought, this one really shines when you're fighting more than one person. Every house has different strengths, so where the Starks are great at winning fistfights, they're weak in the early game and take a while to build up. The Baratheons, by comparison, may not be quite as mighty with a sword, but they can pull through with their winning smiles and widespread fame. The Lannisters and Targaryens make up the rest of the cards in the box, and they, too, excel in areas where the others are weak. When all four houses are in the game at the same time, there's a constant back-and-forth struggle to keep what you've gained and steal from your opponents. The leader changes from turn to turn, and just when you're one turn away from the big win, some sneaky bastard can come flying from the shadows to destroy everything you've built.

To really make the multiplayer game rock, each turn will have players choosing titles that will determine how they interact with other players that round. This choice can be excruciating, because there are lots of angles to consider and long-reaching ramifications of your decision. Be the commander of the Kingsguard, and you'll have a huge edge in military challenges, but then someone else will have a chance to grab Crown Regent and blow your doors off in power challenges. If you're short on money, it might make sense to pick up the Master of Coin and get a little extra scratch that turn - but be careful, because if the guy you meant to hit that turn decides to be the Master of Laws, you can't attack them at all. The different titles interact with each other on top of granting special bonuses for the turn, so just because you don't need the ability of the Hand of the King, you might wind up taking it just to get the bonus when you club the Master of Coin like he was a baby seal.

So many things about this game make it a very tight, intelligent game. It requires many of those words that hardcore card gamers throw around the way mechanics talk about carburetors and crankshafts, words like Hand Management and Table Control and other words that escape me because I don't really get that into anything that doesn't help me pay my mortgage. You have to think to play A Game of Thrones, not just react, and you can believe your plan to be airtight right up until someone plays an event that throws your delicate balance into disarray and leaves you scrambling to pull your bacon out of the fire before your goose is cooked (to mix some metaphors).

I think A Game of Thrones is about to be my new favorite collectible card game (I don't care if they do call it a 'Living Card Game', to try to make us think you're not going to be collecting cards; the only difference is knowing what new cardboard you're getting). All I have so far is the core game, so I still can't play House Greyjoy or House Martell, but from what I've seen so far, A Game of Thrones rivals some of the best CCGs in existence - and may just beat them hands down. It's based on my personal favorite fantasy world, has brilliant player interaction, and easily the best multiplayer format of any CCG ever made. It's a game made for people who like to use their heads when they play their games, and it has all the depth and genius that make me love a game, whether it's on a giant board or a deck of cards.

Pros:
Most depth I've seen in a CCG
Difficult decisions every step of the way - and every one of them matters
Based on a simply fantastic series of novels
Tricky enough that you're going to find a limited Smelly Halfwit factor among players

Cons:
So much happening that it can be tough to keep up
The rules are easy enough to follow, but there can be a painful learning curve

We had a heck of a time finding our copy of A Game of Thrones, but now, as if to mock us, Noble Knight Games has it - and at a much better price than what we paid:
YOU WIN OR YOU DIE
Posted by Matt Drake at 2:45 PM

Glad you enjoyed it. I personally liked this game best in multiplayer games. We'd have 5-6 player game nights and they'd get so heated that when all was said and done, there'd always be this awkward silence as we cleaned up the table. Good times!

If you are looking for quality card games I'd recommend The Spoils. It's like the troupe of Monte Python decided to fix Magic and succeeded. Given your writing style and sense of humor I think it would be a great fit for you.

It's fun, flexible and cheap. Definitely my favorite CCG/TCG.

Legend of the Five Rings. Best multiplayer ccg ever, try it, you won't be disappointed.

If I understand correctly, for a beginner with his wife, it might be better to start with Warhammer Invasion?

Yes, JC, I think Warhammer Invasion is a lot easier to play than Game of Thrones.

I'll check out The Spoils, and L5R when AEG makes that board game/card game combo thing out of it.

@ Matt - spot on review. I've fallen completely in love with this game. The only issue I take with it - it's a CCG (I agree with you - I don't buy this LCG rhetoric!). I just don't have the time and money to expand it. I've owned the base set for about a year and have played it probably a dozen times with my friends (my wife hates it), so it won't get the dollar value out of it that, say, buying another $50 Euro-game that my wife will love and play a ton with me will. Pure economics on a limited budget.

On another note - have you played the new Lord of the Rings CCG? I played it 5 times with a friend who owned it and then immediately went out the same day and bought a copy. It's a pure blast - I really recommend it.

@ Anonymous - I've actually played the L5R CCG, and it was...ok. As a long time Magic: The Gathering player, I liked it better than MtG, but A Game of Thrones, Warhammer Invasion - both better.