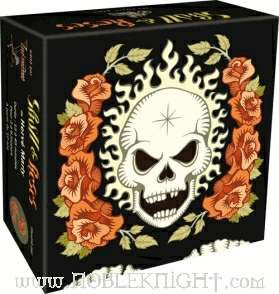 I don't play a whole lot of bluffing games. They're not usually my bag. I tend to have more fun playing games where I move plastic around a board and then people die. I'm not exclusive, or anything - I can enjoy party games and clever German games, too. But bluffing games have never really been my go-to genre.

Skull & Roses is a bluffing game. In fact, that's about all there is to the game. You basically try to sucker everyone else into grabbing up your skull, and scare them out of swiping your roses. Usually, this kind of game is a little obvious, and a lot boring. But Skull & Roses is actually pretty damned fun. In fact, at points, it's downright Machiavellian.

The actual gameplay is so simple that it's hard to see where there would be a game here. Each player has four cards, and you put down a card or challenge for the right to grab some. If you challenge, everyone else gets to try to outbid you. The highest bidder picks up a bunch of cards, and if he can get enough cards that don't have skulls on them, he wins the challenge. If you can do that twice, you win the whole game. That's pretty much all there is to it.

Now, until I understood completely what I was doing, I really didn't dig Skull & Roses. But then I figured out what I was missing - you have to take your own cards first. So if you put down a skull, it might be stupid to challenge, because you know damned well you'll be grabbing it, and that will suck. And if you're all eager to grab your own cards, everyone knows your cards are safe, and they'll outbid you because they already know what they have. But if you mix that up a little - put down the skull and then bid eagerly, for instance - people might outbid you just because you seemed so excited. And then they'll think your cards are safe, and then they'll grab your skull, and then it will be awesome for you and it will suck to be them.

There isn't a whole lot of game here. Skull & Roses is all about selling your opponents a line of bull manure, and trying to figure out when they're trying to sell you their own brand of fertilizer. If you got all your friends together for a night of mental calisthenics and tactical domination, and then pulled out Skull & Roses, your friends are going to take their bean dip and leave. But if you want to sit around a table and mess with other peoples' heads, this is a real good time.

The art on the cards helps make this game a good time. Each player picks a bad-ass biker gang and gets all that gang's cards. You've got the Werewolves, the Panthers, the Serpents, and other names created by the same kinds of math nerds who form fraternities because they think the girls won't be able to tell that all the guys in the house are geeks if they throw out their pocket protectors. The art follows suit - it looks like it could be a tattoo, if your tax accountant decided to get some ink on his butt cheek. It sounds silly, but it looks cool. The cards are thick and round, with a great linen finish that makes them fun to hold and easy to play.

I had a great time playing Skull & Roses. It's a hoot to snicker when you sucker another player into picking up your skull card. It's also fun to let out a little 'Hell yes!' when you flip the last card out of six and discover that you guessed right. Because the game is all about bluffing and lying and deception, all the fun comes in trying to buffalo your buddies and then gloating about it when you succeed. It's one thing to roll some dice and say, 'That's it, I just took Berlin,' but it's another thing entirely to see the 'I hate you' glare you get when you show your friend a skull and say, 'Hah! Got you again!'

Cons:
Not much depth outside the bluffing

Skull & Roses is fun, if you like to play games where you mess with your friends' heads. Noble Knight Games has it, and it's pretty darn cheap, for the amount of fun you'll get out of the box:
LET'S LIE ABOUT IT
Posted by Matt Drake at 2:30 PM