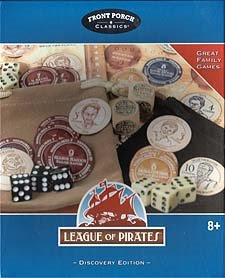 You know when you need to choose between two people? Like, your dog just puked in the living room and you're trying to get your wife to clean it up, and you flip a coin to see who has to break out the paper towels and carpet cleaner? You might also roll dice, draw cards, play a little rock-scissors-paper, or pick a number out of a hat. Or you could use the latest method I've found for conducting a completely random binary poll - play League of Pirates.

Every turn in League of Pirates starts with a thrilling dice-off (and by 'thrilling' I mean 'not the least bit thrilling'). Each player picks up five dice and rolls them, trying to get a 1, 2 and 3, and then score highest on the other two dice. You each roll three times, trying to get the highest score. The winner gets to take an action; the loser gets to sit there and wonder why he thought playing this game was a good idea.

This dice roll is a neat way to decide who gets to take a turn, as long as you want the same result as flipping a coin, but want it to take like ten times as long. There's no skill in this roll at all, and three times out of five you won't actually get the 1-2-3 you need anyway, and the other player will get a crappy roll and still win. And then there are those frequent moments when neither of you manages to roll 1-2-3, and so you get to roll again. You can see how this game mechanic is far superior to drawing straws, as long as you really like to roll dice for just about no reason at all except that the dog threw up after raiding the cat box for snacks.

So once you've finished this hideously protracted rolling thing, one of the players can do something while the other player wishes he were playing something else (and wondering if it might be worth it to just concede and clean up the puddle that is currently soaking into the pad). The actions you can take include:

The idea is to get the discs you need to fill your card so that you can say, 'Yay! The game can end!' and you can get back to doing something less inane than playing League of Pirates, like scrubbing the back of the refrigerator. Since you have virtually no control over whether you win or lose the game, you can't even celebrate winning, except that it means you get out of picking up the barf under the coffee table.

Now, I'm being pretty hard on League of Pirates, and I have to say that there is a redeeming feature to this game. The dice are really nice, and you get ten of them, five white and five black. I took the dice out of the game and put them in Warhammer Quest, which comes with really crappy dice. So there is one reason to buy League of Pirates - nice dice. Or you could just buy a set of dice. I guess that's up to you.

So the next time you're wondering how to decide which of you has to give the dog a bath, just reach for a couple dice. Don't pick up this game unless you want to take twenty minutes to do what you could do with five seconds and a coin flip.

Cons:
Everything that is not the dice, including the rules that tell you how to use the dice

After an exhaustive search of the Internet, I've found this excellent place to get yourself a copy of League of Pirates:
http://www.ssqq.com/stories/images/dumpster.jpg
Posted by Matt Drake at 11:38 PM

I bet it felt really good to rip apart a crappy game knowing you have a sponsor and you will keep getting more games even if the company is not happy with you being honest ( oh yea , and funny ).

So who cleaned up the puke already?

Thanks for letting me know this is a dud, I need a Pirate game in my collection ( do you have a favorite pirate game, is their one you want to review - then that is my next choice of games to review )

Hi,
League of Pirates is really nice game I like your way of explaining.. Thanks for this blog...