Quick lead-in comment - Asmodee has a new customer service email, and they asked me to post it here. So I am, because they send me fricking everything and I know where my bread is buttered. It's contact_us@asmodee.com. Enjoy. 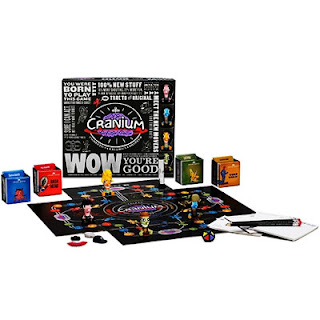 Allow me to get this out of the way, right up front - I have no idea if there is any functional difference between Cranium WOW and previous versions of Cranium. For that matter, I'm not 100% certain the game is even supposed to have WOW in the title. The box cover is a little confusing, with crazy phrases all over it and words going this way and that like a Robin Williams comedy sketch, from back when he was on cocaine every time you saw him.

I can tell you that the game inside the box is pretty damned wacky. There's a wacky board, and some wacky pawn-thingies, and a bunch of wacky activities. It's like a wacky overdose - the pawns all look like cartoon people with huge melons, and they all have a hole in the middle of their head so you can put a hairdo or hat on them (hairdos and hats are also in the box), and the board has lines looping all over the place while little colored cartoon freaks dance in circles. Between the pawns and the board, it's kind of like watching an episode of Ren & Stimpy after finishing a bottle of tequila and a Red Bull.

But if the art is wacky, the actual activities in the box are even wackier. The activities come in one of four flavors - act stuff out, do something creative, answer bizarre questions or play around with words. You'll be split up into teams, taking turns, with one person on your team trying to get you to guess 'umbilical cord' by sculpting a baby out of modeling clay. And in case you're curious, a clay baby with an umbilical cord looks an awful lot like a tiny John Holmes.

Or you might have to draw out your clues, Pictionary-style - but with your eyes closed. Spongebob Squarepants looks even more psychedelic when drawn by a 12-year-old with her eyes closed. The eyes weren't even on the goofy square body.

Maybe you have to spell a word backwards, one letter at a time, taking turns while the other team tries to follow along and make sure you're spelling the word correctly (except, you know, backwards). You may have to look at a list of beers and pick the two that are not lagers (I did just fine on that one, in case you're curious), or unscramble 'CABIN HALL MANOR' to get 'Abraham Lincoln.' It's pretty much flat-out madness - but it sure is fun.

This is not like any other party game on the planet (except for all the other games called 'Cranium'). It revels in its crazy activities, and there are a huge variety of them. If you're really great at trivia, the Data Head cards will let you stretch your mental muscles and display our knowledge of total crap that nobody cares about. If you like to impersonate celebrities, the Star Performer categories might just let you stand up in a crowded room, squint, and say, 'Are you talkin' to me? You must be, because I don't see anyone else here' (whether or not you shave your head into a mohawk is completely up to you). Maybe you like to do charades with someone else's body, or define 'gambol'. Whatever stupid human tricks you know, there's probably an activity where that will come in handy (unless your trick involves lighting farts, because while that is insanely hilarious, it probably won't help you win Cranium WOW).

Now, the thing is, you have to play Cranium WOW with people who are in the mood to enjoy themselves, who don't mind looking like retarded penguins in front of grown men, and who have a very flexible set of personal boundaries. If you're playing with some douche with a rod up his ass, he'll suck the fun out of the room like cat litter on an oil spill. If anyone starts to get angry, the game goes south really fast - I know, because when my daughter took five minutes trying to draw, 'vending machine', and drew completely nonsensical shapes all over three sheets of paper, my wife was ready to sell her to gypsies and get a dog instead.

But if you like to have the kind of wacky hijinks usually reserved for people who mix sleeping pills with peyote, Cranium WOW might be just the thing for your next gathering. And as an added bonus, you don't even have to do any drugs.

Pros:
A silly, fun blend of nearly every bizarre party game ever made
Lots of hilarious activities will have you in stitches
Really cool art and fun components

It's no surprise that Dogstar Games doesn't carry Cranium WOW, because they're a pretty serious hobby gamer store. This is the kind of game you find at mall book stores (which is where I found mine). You can find one here:
http://www.hasbrotoyshop.com/ProductsByBrand.htm?ID=21350&BR=866&pn=
Posted by Matt Drake at 5:45 PM

And yet you despise Apples to Apples... hmmm...

A scene from a game of Apples to Apples:
Me: When I say 'danger,' you think...
My son: Penguins!
Me: You're retarded. Oh, and you win.

A scene from a game of Cranium WOW:
Me, watching my daughter draw a dingus with her eyes closed (she was trying to draw a telephone):
This game is awesome.

I'm really curious what the difference actually is between this and regular Cranium, if anyone else knows?

And by the way, I love the site. Keep it up!